Every year it seems like the question is how much further can Ageo go? The answer still seems to be more. More further.

The Ageo City Half Marathon is the world's greatest half marathon, the place where Hakone Ekiden-bound universities line up most of their rosters to help coaches whittle down the contenders for the final sixteen-man Hakone lineup. Perfect conditions at this year's race meant something special. 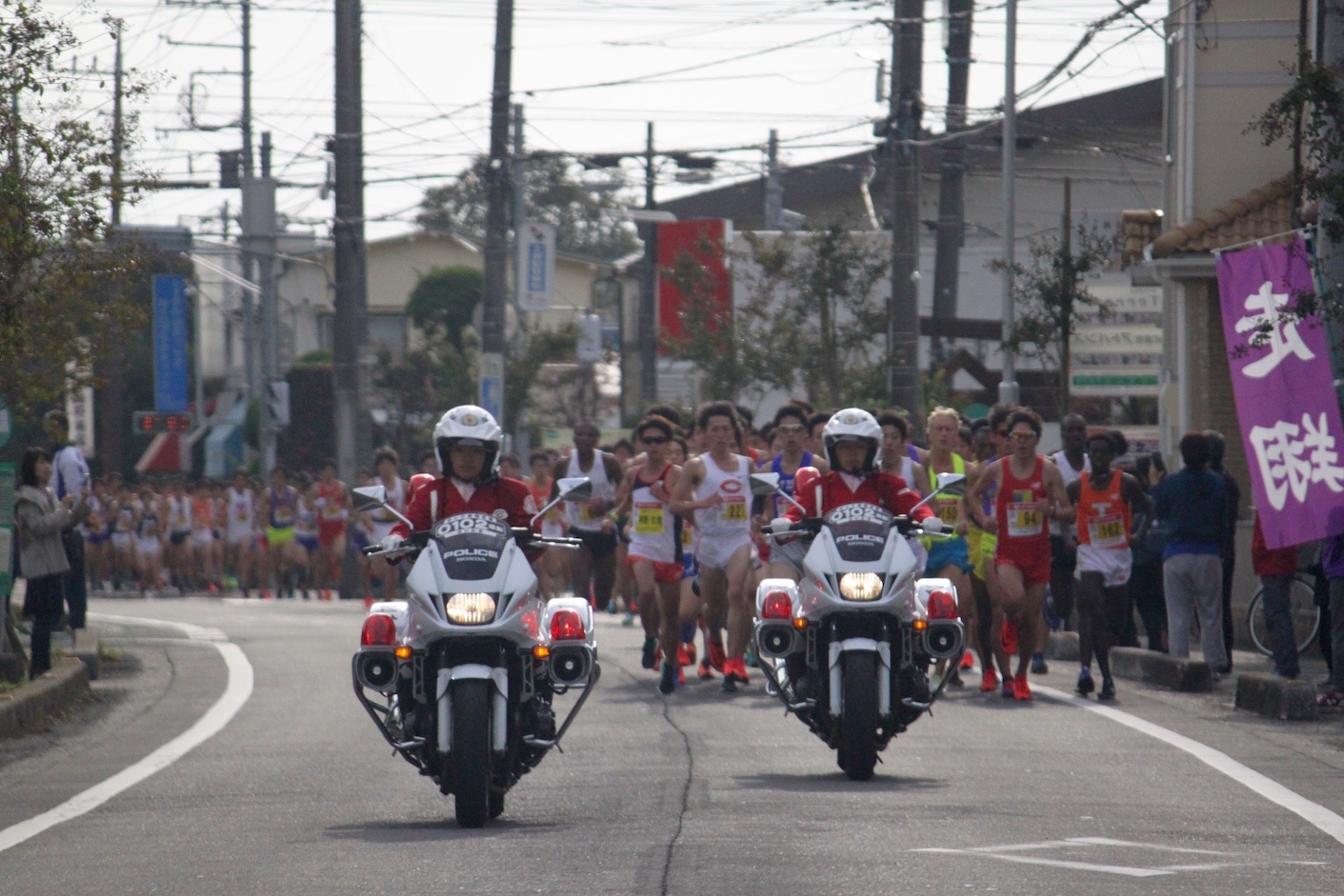 5 km went by in 14:32 and 10 km in 29:05 without much loss to the front pack until a move by Laimoi after the 10 km turnaround. Derese and Ken Nakayama (Chuo Univ.) were the only ones to go with him, forming a lead trio that quickly opened on the rest of the leaders. Shitara soon made a move to go after them with Nilsson and Kamino picking it up to stay with him, but Kamino soon dropped back to the rest of the main chase group.

Unlike last year's race, where Simon Kariuki (Nihon Yakka Univ.) dueled with Patrick Mathenge Wambui (Nihon Univ.) to a 1:01:25 course record while the Japanese university men hung back over a minute and a half behind, this year Nakayama was in it to win it, relentlessly attacking on 1:01:30 pace and getting rid of Derese before Laimoi surged heading into the main street past Ageo Station with 2.5 km to go. Laimoi took 30 seconds off his debut at last month's Hakone Ekiden Qualifier to give Ageo its second-straight course record in 1:01:19. Nakayama was next in 1:01:32, the best-ever time at Ageo by a Japanese man, a school record, and the 7th-best time ever by a Japanese-born university student on a record-legal course. 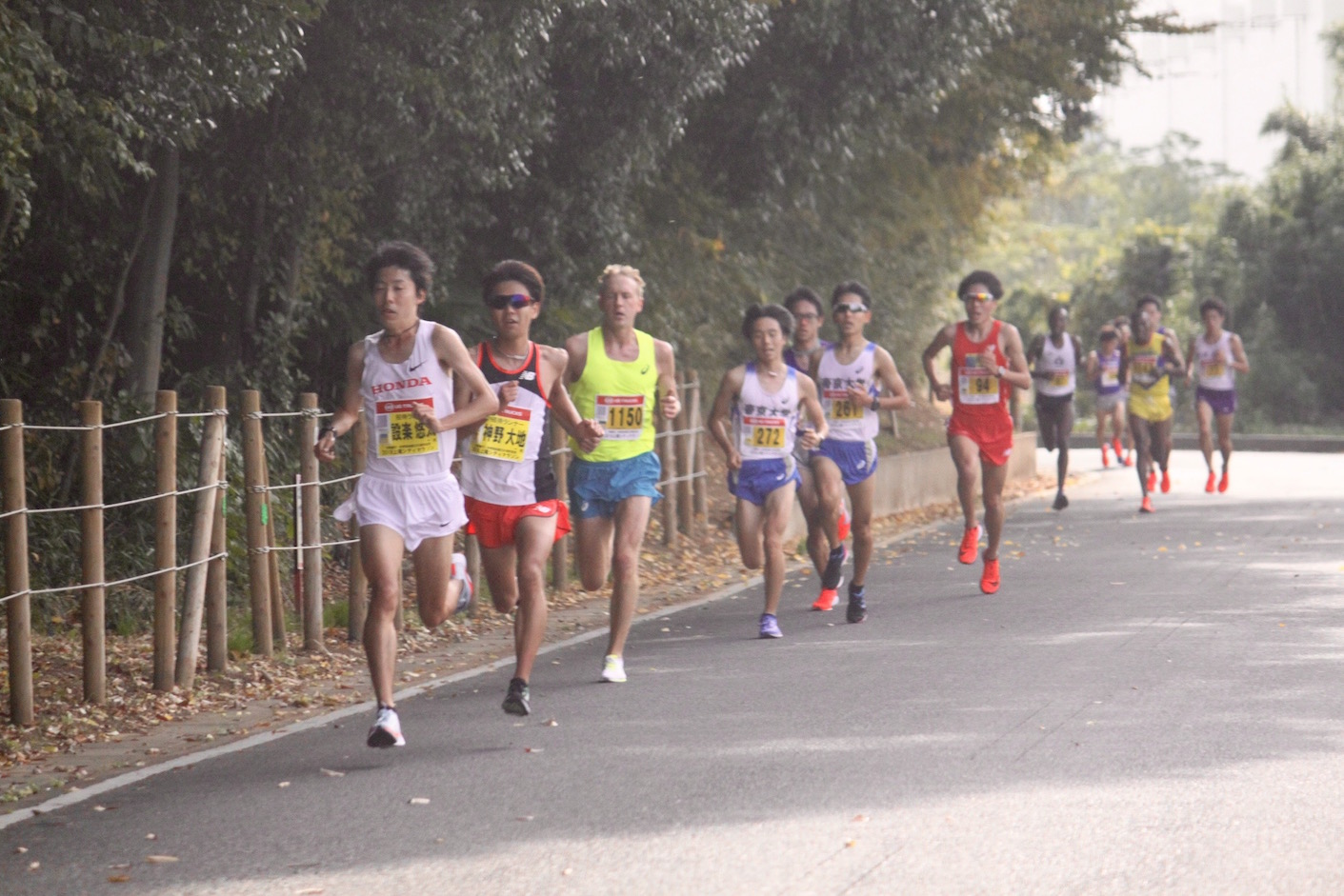 At the 2013 Kazan World University Games half marathon Shitara and Nilsson finished 33 seconds apart. This time Nilsson locked on to Shitara, staying right next to him and even making a few moves to the front as they tried to catch Derese. Nilsson almost made it to 20 km before Shitara surged, pulling away to take 4th in 1:01:59, 9 seconds behind Derese. Nilsson, who came to Ageo with a 1:03:34 best and had hoped only to crack 64 minutes, finished 10 seconds behind the Japanese national record holder in 1:02:09, a Swedish national record by 20 seconds. "I didn't realize that was Yuta," he told JRN after the race. "If I had I would've been too intimidated to try to break him." Within hours Nilsson's NR was already making headlines back home and elsewhere in Scandanavia. 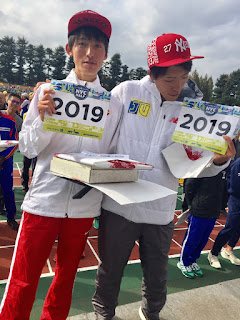 Closing on Nilsson after he lost touch with Shitara, Genki Kaneko (Josai Univ.) took two minutes off his PB to finish 6th in a school record 1:02:16, outkicking Kamino in the process. As the top two Japanese university men Nakayama and Kaneko earned invitations to the 2019 United Airlines NYC Half Marathon, receiving their invitations from Shitara who was the first Japanese university runner invited to the NYC Half back in 2012.

After months of setbacks, Kawauchi had the breakthrough he needed in his last serious race before the Dec. 2 Fukuoka International Marathon. Running in the second pack, Kawauchi closed hard to take 14th in 1:02:49, the third-fastest time of his career and his best time since 2012. In Fukuoka he will face Shitara and Kamino again, hoping to run his first sub-2:10 of what has been a year of extreme highs and lows. 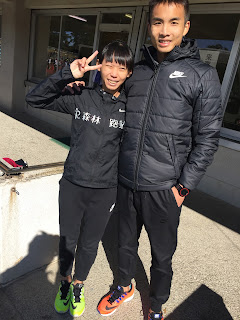 In the women's race, 2017 winner Chun Yu Tsao returned from Taiwan to run a PB 1:13:56, the second-fastest time ever by a Taiwanese woman following Chien Ho Hsieh's 1:12:19 at January's Osaka Half Marathon. But Tsao was left far behind by tough competition as local Kaori Yoshida (Team RxL) took the top spot in a course record 1:11:54, the first woman to break 72 minutes in Ageo. Former Universal Entertainment runner Kaoru Nagao (Sunfield AC) was 3rd in 1:15:50, one second faster than Tsao's winning time last year.