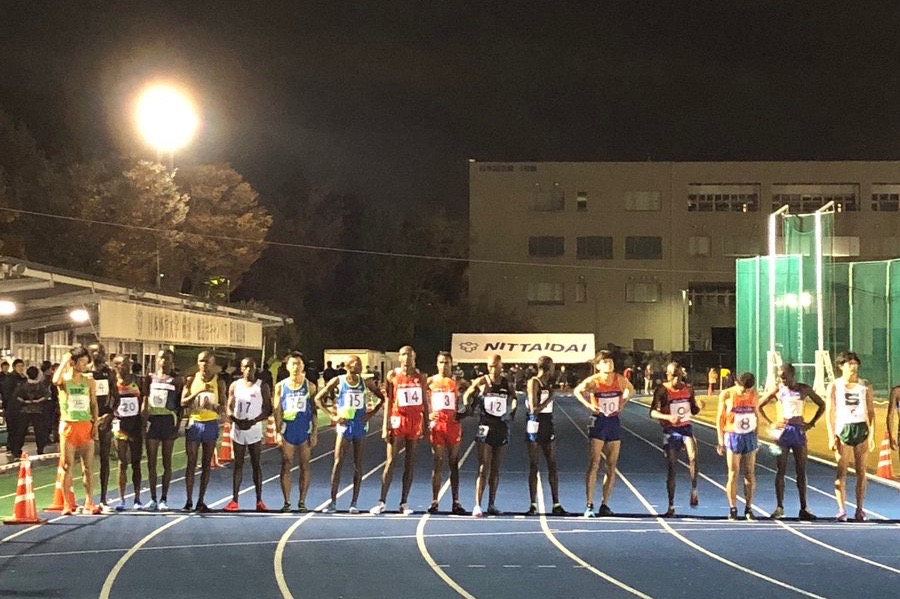 For the second time in the last three weeks, a Japan-based Kenyan ran the fastest time in the world this year for 10000 m at Yokohama's Nittai University Time Trials series. On October 20th it was 2015 World U18 Championships 3000 m gold medalist Richard Kimunyan (Hitachi Butsuryu), 20, with a 27:14.70  that surpassed Ugandan Joshua Cheptegei's world-leading mark by almost five seconds. This time it was 2018 World U20 Championships 5000 m silver medalist Stanley Waithaka (Yakult), 18, taking almost two minutes off his PB to break Kimunyan's mark with a 27:13.01 win.

Both winners received support from 2014 Commonwealth Games steeplechase gold medalist Jonathan Ndiku (Hitachi Butsuryu), who ran season bests for 2nd place each time, 27:50.38 three weeks ago and 27:28.27 on Saturday. 2013 World U18 Championships 3000 m bronze medalist Alexander Mutiso (ND Software) was also under 28 minutes, running just off his PB at 27:42.16 for 3rd. Kazuma Taira (Kanebo) was the top Japanese finisher, 7th in a PB of 28:16.22.


Taira's teammate Samuel Masai (Kanebo) won the Nittai 5000 m A-heat in 13:30.22, while just behind him Kensuke Horio (Chuo Univ.) followed up on his 1:01:57 PB at last month's Hakone Ekiden Qualifier half marathon with a 13:33.51 PB for 2nd, the second-fastest time so far this year by a Japanese man. First-year Yuhi Nakaya (Waseda University) followed up a great run at last weekend's National University Men's Ekiden with a 13:45.49 PB for 9th.


Hitomi Niiya's brilliant comeback run at the East Japan Women's Ekiden was the biggest news of the weekend on the ekiden circuit, but two corporate men's regions also held their qualifiers for the Jan. 1 New Year Ekiden national championships. At the 61st Kansai Region Corporate Men's Ekiden, NTT Nishi Nihon, SGH Group and Sumitomo Denko staged a three-way battle of constant turnover throughout the race that came down to a long surge over the final 4 km by anchor Yusei Shirokoshi that gave NTT Nishi Nihon its first-ever win. NTT covered the seven-stage, 80.55 km course in 3:59:24, 11 seconds up on SGH. Missing star runner Hyuga Endo, Sumitomo Denko finished 3rd in 4:00:37 after having been within two seconds of the lead mid-race. Watch a complete replay of the race above.

At the 58th Chugoku Region Corporate Men's Ekiden, the Mazda men led start-to-finish to win the seven-stage, 80.8 km race in 4:04:10. But it was a more exciting race than it might look. Despite having been over a minute and a half behind halfway through, Chugoku Denryoku closed to within 8 seconds of Mazda thanks to a pair of stage wins by its final two runners Naoki Okamoto and Kaido Kita. On a roll since his DNF at April's Boston Marathon, Okamoto broke the course record on the 19.0 km Sixth Stage, running 56:25 to bring Chugoku Denryoku within 38 seconds of Mazda. Kita ran 37:40 for the 12.5 km anchor stage but couldn't quite close the gap to Mazda's Kohei Mukai. In the mix for 2nd through much of the race, Chudenko was 3rd in 4:06:35.