Know Your Japanese Runners in Chicago

Motivated in part by the legacy of Toshinari Takaoka's longstanding former national record of 2:06:16 at its 2002 race, the Bank of America Chicago Marathon has long been a draw for top-level Japanese athletes male and female. Few men have made much of an impact in Chicago, with none making the top five in the last 14 years and only two, Hiroaki Sano and Koji Kobayashi, breaking 2:11 in the same time period. But they still keep coming, and this year's crew of five looks to have the best chance of bettering the results of the last decade and a half.

Fujimoto got a flash of international attention back in 2010 when as a complete unknown he won the Kanto Regionals 5000 m, Japan's most competitive university 5000 m, in 13:38..68. He's never taken that mark further since joining the Toyota corporate team but has gone as fast as 28:20.96 for 10000 m and 1:01:31 for the half marathon in the years since then. His marathon debut this spring at Lake Biwa resulted in only a 2:15:30, but with teammate Yuma Hattori having gone sub-2:10 in Tokyo last year and 2:10:26 in Prague this year with a similar 1:01:40 half best Fujimoto should have the potential for better. 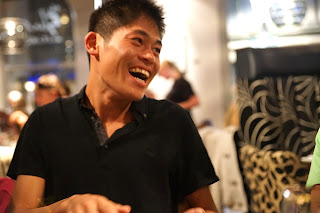 Kawauchi arrives in Chicago, his third American marathon of the year, as Japan's first and only Abbott World Marathon Majors race winner male or female. On the one hand that brings its share of pressure, but on the other it's pretty clear what would constitute a successful run in Chicago. 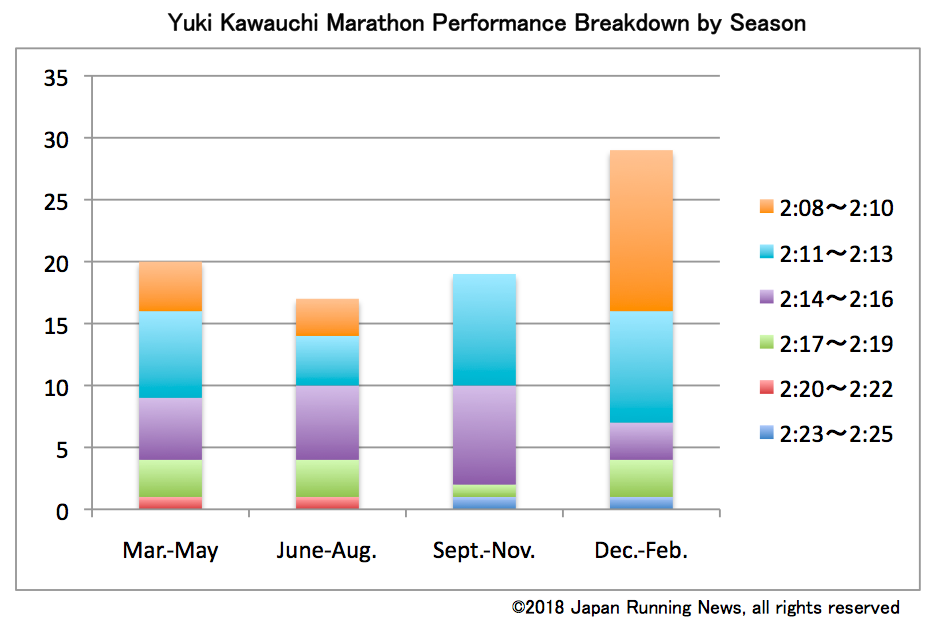 In his 85 marathons to date Kawauchi has broken 2:11 twenty times, the second-most in history, but he has never done it in the fall season. In that it's easy to see the impact of not being able to get away somewhere cooler to train during the summer months due to his full-time job, and with a brutally hot summer behind him this year it would be one of the better performances of his career if he were to clear the 2:11 hurdle in Chicago. Even bettering his fastest time of the year, his solo 2:11:46 CR at February's Kitakyushu Marathon, would be a good day regardless of how fast anyone else runs, a time that would put him among the ten fastest Japanese performers ever in Chicago.

A training partner of 2018 Asian Games gold medalist and 2:06:54 man Hiroto Inoue and 2014 Asian Games silver medalist and 2:08:09 man Kohei Matsumura, Kiname has been on a solid trajectory since his 2:12:48 debut at Beppu-Oita in 2014, winning his follow-up at the 2016 Hokkaido Marathon, taking his PB to the 2:10 level at Beppu last year, then dropping a 2:08:08 in Tokyo this year. Chicago will be his international marathon debut. A 29:35.42 for 9th in the 10000 m B-heat at last week's National Corporate Track and Field Championships wasn't encouraging, but if Kiname managed to get under 2:08:00 in Chicago he would earn a 5,000,000 yen bonus, ~$44,000 USD at the current exchange rate, under the corporate league's Project Exceed high performance program. 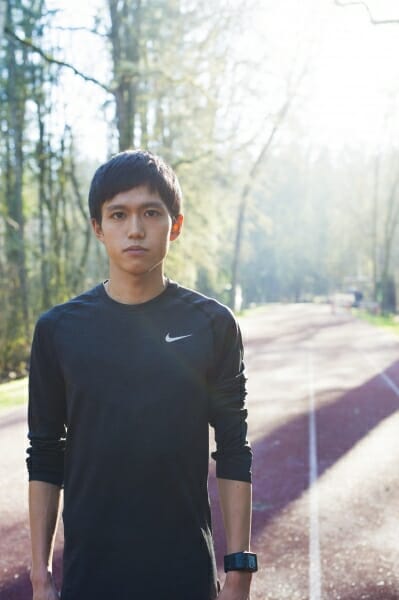 After a solid 2017 that saw him take 3rd in both Boston and Fukuoka Osako had a patchy spring, winning the National Cross Country Championships and taking the top Japanese spot at the World Half Marathon Championships but DNFing a planned shot at the 10000 m national record and pulling out of the National Track and Field Championships. In early September paced by two bicycles he soloed a 1:01:01 PB to move up to all-time Japanese #9 for the half marathon. Last year he did something similar a month out from Fukuoka, soloing a 1:02:15 in Phoenix before running 2:07:19. Naturally his fans in the Japanese media are looking at those numbers, the 1:01:01 in Redmond this time, doing the math, and anticipating the Rapture. But whether the Labor Day mark shows genuine improvement or is simply bringing his half PB into line with his other marks, which rank him all-time JPN #6 for 10000 m and #7 for the marathon, remains to be seen. Sixteen Japanese men have broken 2:08, but only one, Takaoka, has ever done it more than once. Regardless of whether he takes himself further even a sub-2:08 would be a great day for Osako. If he makes it as far as the NR Project Exceed will be there waiting with a 100,000,000 yen payday.

In his last race at Waseda University the likable Suzuki made his marathon debut at age 22 at his hometown Ehime Marathon in hopes of breaking its 1965-era course record of 2:16:49. Kawauchi was also in the race, and when Suzuki set out fast the pair pushed it to 2:07 pace in the early going. Suzuki lasted until 20 km, but although Kawauchi went on to take 7 minutes off the CR Suzuki succeeded in his original goal of clearing the old CR, celebrating as he came in to finish 2nd in 2:14:53. Since joining the corporate leagues he has been one of the most entertaining people on the circuit and taken his half marathon PB down to 1:01:53. Last week he ran 29:12.98 to win the same Corporate Nationals 10000 m B-heat that Kiname ran.  Two years almost to the day since he set the CR on the Izumo Ekiden's Fourth Stage he hopes to take his marathon PB further too in Chicago. 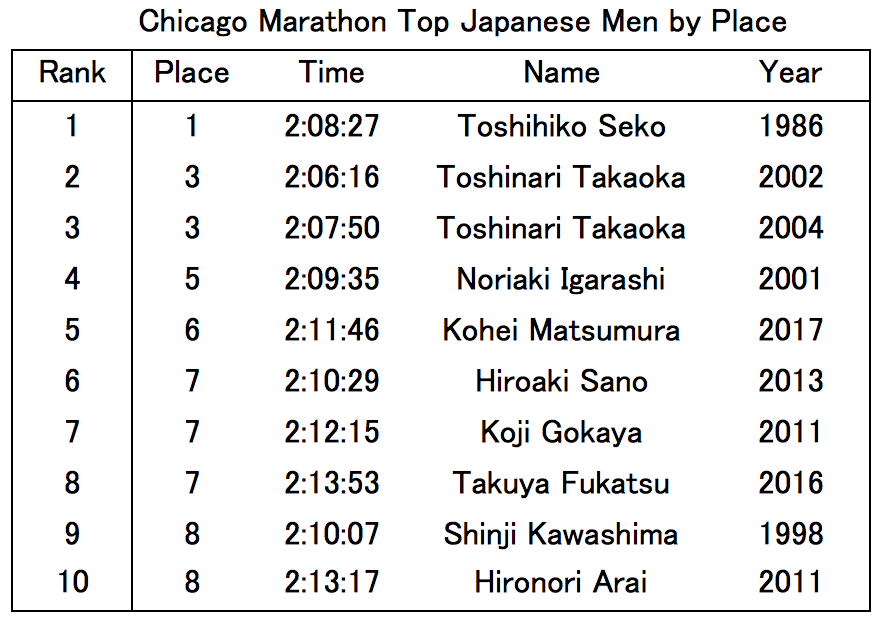 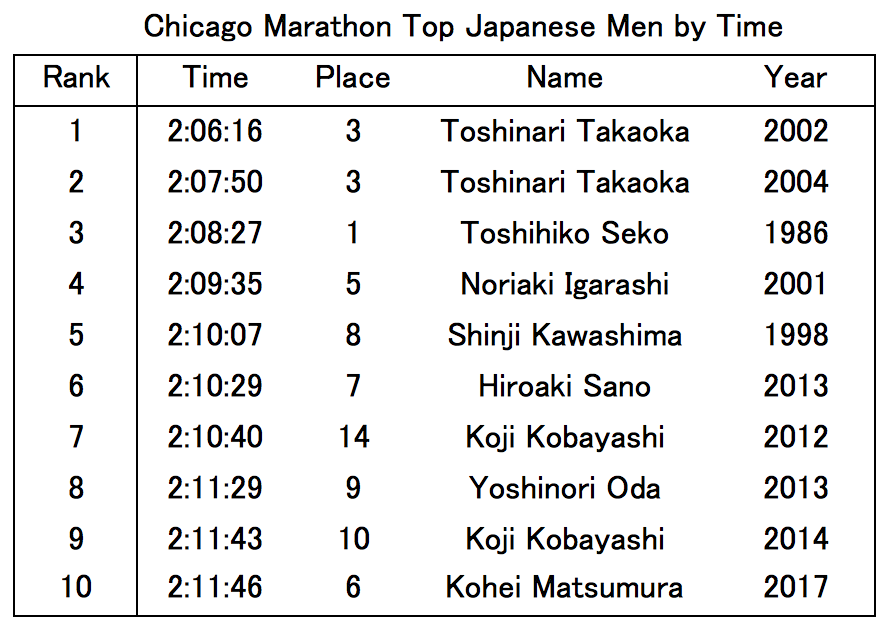 Unknown said…
Thanks for this great info!! I only knew about Kawauchi and Osako coming to Chicago this year. It's so awesome to have them come and go for their best race on our pancake-flat course! I'll be volunteering at Aid Station 13 (mile 17) this year and sure look forward to cheering on these Japanese runners! The weather is a bit weird/unstable this week here in Chicago. It got super warm today (86F/30C) all of a sudden and the temps will drop tomorrow again (58F/14C overcast, perfect marathon weather!). Hopefully it'll stay somewhat cool and no rain/wind at least while the elites run Sunday!
October 4, 2018 at 11:05 AM