"I'm really happy to have the chance to race in the Bank of America Chicago Marathon and the Abbott World Marathon Majors," Kawauchi said. "I'm looking forward to running the same race where Toshinari Takaoka set the former national record and so many other great Japanese athletes have run well. My results in the other American Abbott World Marathon Majors races, Boston and New York, were pretty good, and I'll do everything I can to line up in Chicago ready to produce good results there too."

“Yuki and Suguru are exciting additions to our elite field,” said Executive Race Director of the Bank of America Chicago Marathon Carey Pinkowski. “Yuki has taken an unconventional path to marathon stardom; there’s no other elite runner competing today like him. And Suguru is young in his marathon career with a real chance at breaking the Japanese national record in Chicago.”

Before becoming the 2018 Boston Marathon champion amidst freezing temperatures and pouring rain where he said, “for me, these are the best conditions possible,” Kawauchi gained global renown for his prolific racing schedule. He holds the record for the most marathons run under 2:20 (79), he boasts a PR of 2:08:14, he has won more than 30 career marathons and he finished 12 marathons in 2017 alone. He has raced more than 20 times in 2018, including running the Kuki Half Marathon dressed in a panda suit and setting a course record at the Yatsugatake Nobeyama 71K ultramarathon in May. He won there by 30 minutes. 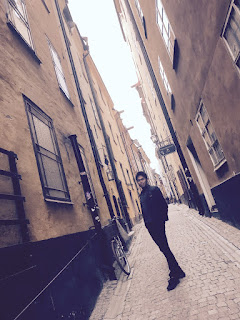 Kawauchi, often referred to as a “citizen runner,” “rebel government clerk” and “emperor of pain,” fits his training and racing in around his full-time job as a government employee, bucking a national trend where most elite runners compete full time on corporate teams. To track Kawauchi’s racing schedule, Brett Larner of Japan Running News dedicates a page of his blog to Kawauchi called “The Kawauchi Counter.”

Kawauchi thundered onto the global stage when he placed third at the 2011 Tokyo Marathon. He explained his marathon tactics in a post-race interview this way: “Every time I run, it’s with the mindset that if I die at this race, it’s ok.”

Compatriot Suguru Osako, based in Portland, OR., will be joining Kawauchi in Grant Park on October 7. Osako is a 2016 Olympian and the Japanese record holder in the 3000m and 5000m. He competed in the 5000m and 10,000m in Rio after winning both events at Japan’s national championships. He made his marathon debut at the 2017 Boston Marathon, landing on the podium in third in 2:10:28. At the time, he was the first Japanese man to finish among the top three since Seko won Boston in 1987. He closed out 2017 with an impressive personal best and third place finish at the Fukuoka Marathon, 2:07:19.

 Osako hopes to secure an additional bonus in Chicago by breaking the Japanese national record , currently 2:06:11. If he manages that feat, the Japanese Corporate Track and Field Federation will pay him a 100-million-yen bonus, nearly one million U.S. dollars. “I want to try to break the national record, but the most important thing to me is to be competitive with the other runners,” said Osako. “I’m really excited and proud to run with Mo Farah and Galen Rupp. I'm going to enjoy the challenge.”

Japan has a long history of producing some of the world’s best marathon runners, stretching back to the post-war era of the 1940s and 1950s. Japan dominated the global scene in the 1960s. In 1966 alone, 15 of the top 17 marathon times belonged to Japanese runners. As Tokyo looks ahead to hosting the 2020 Olympics, it hopes to see its marathon runners - like Osako - back in the medal count.

The 2018 Bank of America Chicago Marathon, a member of the Abbott World Marathon Majors, will start and finish in Grant Park beginning at 7:30 a.m. on Sunday, October 7. 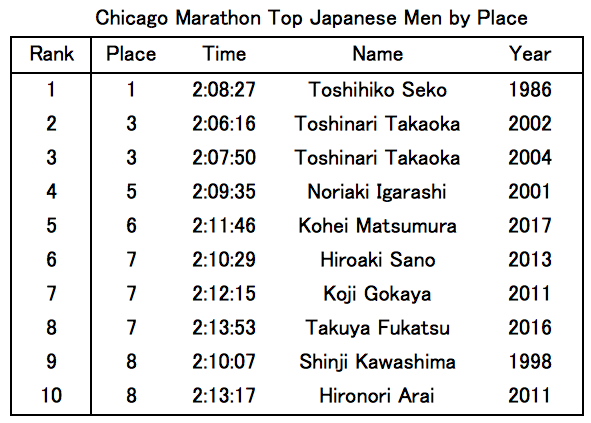 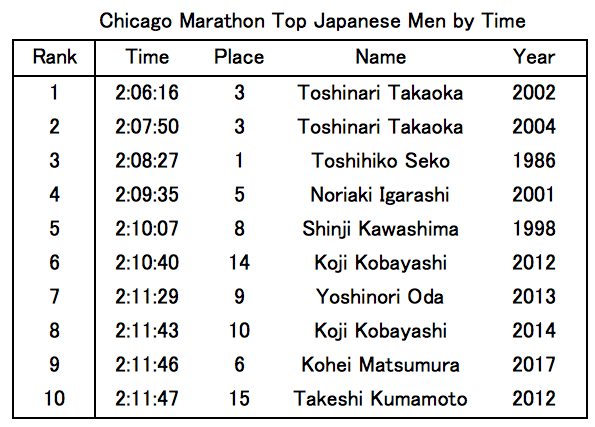