May 03, 2017
by Brett Larner
all statistics c/o the ARRS database
corrections and additions welcome

The upcoming sub-2 marathon attempt is generating a lot of talk about the very sharp end of men's marathoning, the delivery of the single greatest marathon performance of all time. But there are other ways of thinking about who ranks at the top of the list of all-time greats than just a single run by a single athlete. Who performed the most consistently at a high level, had the greatest depth at quality as a marathoner over their career? Sub-x marathon records, the greatest number of times a single runner has gone under 2:03, under 2:04, under 2:05, are one way to look at that.

The table below shows the seven men from four countries who hold the records for every one minute increment from sub-2:03 to sub-2:20. Click to enlarge. Athletes with names in green are still active, while those in red no longer compete. Within the table green indicates a sub-x record, yellow a record which a given athlete is within three marathons of tying, and red a level beyond that athlete's PB.

Kenyans hold the records at the four fastest levels, Ethiopians the next six levels, Japanese the next seven, and the U.S.A. the final record, sub-2:20. World record holder Dennis Kimetto is the only man to have broken 2:03 as of this writing with one sub-2:03. London Olympics bronze medalist Wilson Kipsang holds the records for sub-2:04, sub-2:05 and sub-2:06. The sub-2:07 record, ten, is jointly held by former world record holder Haile Gebrselassie and Beijing Olympics bronze medalist Tsegaye Kebede, with Kebede also holding the sub-2:08, sub-2:09, sub-2:10 and sub-2:11 records. Abebe Mekonnen holds the sub-2:12 record with 22. Incheon Asian Games bronze medalist Yuki Kawauchi holds every record from sub-2:13 to sub-2:19, with Doug Kurtis holding the sub-2:20 record at 76.

Looking at potential updates to these records, Kipsang is one sub-2:07 away from tying the sub-2:07 and sub-2:08 records and two from adding both to his resume. Given his pair of 2:03 times in his last two marathons that seems realistic. Kebede is one more sub-2:07 from eliminating Gebrselassie from the list of record holders, but with more than three years having passed since he last ran that fast time isn't on his side. Over the last few years Kebede and Kawauchi have been waging an intense but unnoticed battle to erase Mekonnen from the books, Kebede taking away his sub-x records from the faster end and Kawauchi from the slower. Both are now one sub-2:12 from tying Mekonnen's last remaining record, which survived the month of April after Kawauchi ran 2:13:04 in Daegu and Kebede 2:12:31 in Hamburg. 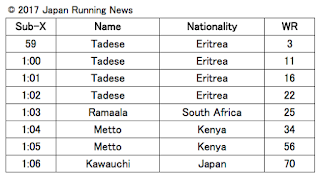 Given the frequency of his racing Kawauchi is likely to get there first, potentially tying it this Sunday at the Volkswagen Prague Marathon and then breaking it at one of the three other marathons he plans to run over the summer. He's also on track to break Kurtis' sub-2:20 record in March or April next year. With enough success at the faster end of his ability he has the potential to hold every record from sub-2:10 to sub-2:20 by the time he's done. Uniquely among the seven record holders, Kawauchi also holds a sub-x record in the half marathon, shown above, with 70 career sub-1:06 half marathons to date. As in the marathon, at the faster end he has the potential to also take the sub-1:04 and sub-1:05 records from Kenyan Philemon Kipkering Metto. 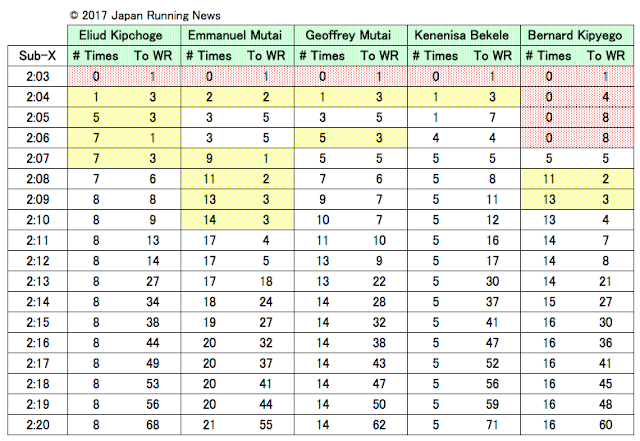 Looking at other active athletes with the potential to break some of the marathon sub-x records, Rio Olympics gold medalist Eliud Kipchoge, the focus of the sub-2 project, is the clear favorite with one race to go to tie Kipsang's sub-2:06 record of eight. Berlin World Championships silver medalist Emmanuel Mutai is also one race away from becoming the third runner to run sub-2:07 ten times in his career, but like Kebede it has been three years since he has run that kind of time. Both he and Birmingham World Half Marathon Championships silver medalist Bernard Kiprop Kipyego are two races away from tying the sub-2:08 record of 13. 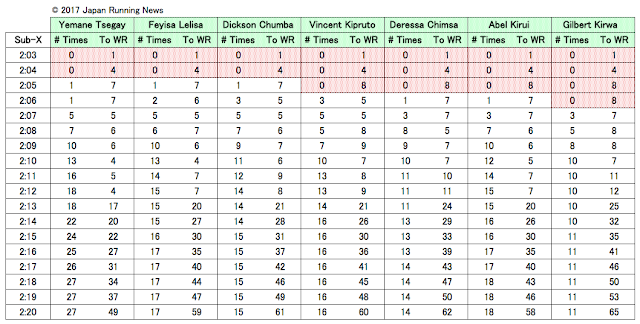 Among other active athletes with ten or more sub-2:10 marathons to their names, none is likely to break one of the sub-x records anytime soon. Beijing World Championships silver medalist Yemane Tsegay and Rio silver medalist Feyisa Lelisa, both of Ethiopia, are closest, each of them four races away from tying the sub-2:10 record. Tsegay is likewise four races away from Mekonnen's sub-2:12 record, but as with Kebede that record is likely to be put out of reach by Kawauchi before he gets there.

January 20, 2022
Scheduled for Feb. 20, 2022, the 16th Shonan International Marathon has been officially canceled. For everyone who has borne hope through the coronavirus crisis and worked together to bring back mass-participation marathons, we had set as our goal the task of staging an event where everyone could participate safely even in the midst of the pandemic. To that end we were requiring a negative PCR test and full vaccination for all runners, volunteers and staff members, and we are deeply disappointed not to be able to follow through for all of those who understood the need for these requirements and made the brave decision to support them. Our initial plan for implementing the race safely was based on these two requirements and additional countermeasures against the spread of the virus. But with the outbreak of the omicron variant, which has a very short incubation period from infection to expression of the disease that decreases the reliability of PCR testing in the three days before the
Post a Comment
Read more