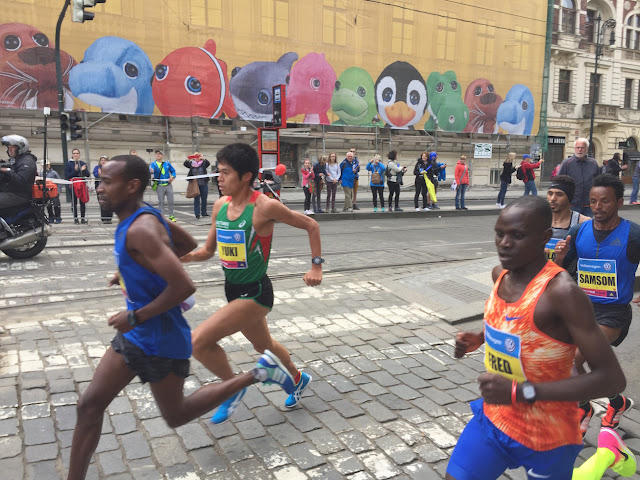 London World Championships marathon team member Yuki Kawauchi (Saitama Pref. Gov’t) lined up at the Volkswagen Prague Marathon with support from JRN in a bid to break his four-year-old best of 2:08:14. Planning to go with second group pacer Eliud Macharia of Kenya at 3:02/km, Kawauchi and Macharia found themselves part of the lead group when its pacers were unable to hit their target 3:00/km in the challenging early part of the Prague course. The lead group accelerated approaching 15 km, while Macharia, Kawauchi and Moroccan Salah Eddine Bounasr stayed their course and hit it dead on 2:08:00 pace in 45:30. 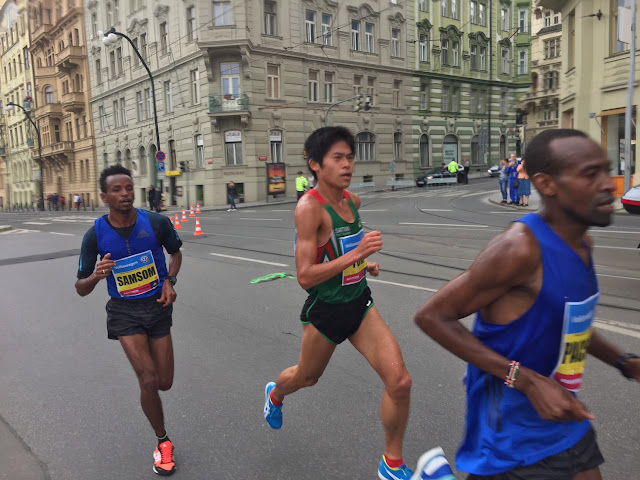 Over the next 10 km the leaders again slowed, letting Macharia’s trio return and even go to the front without changing their pace. Following the pacers’ departure it was down to a race of six, the Ethiopian trio of Gebretsadik Abraha, Bazu Worku and Mekuant Ayenew, Kenyan Benson Kipruto, Bounasr and Kawauchi. The group hit 32 km in 1:37:43, well off the hoped-for sub-2:07 winning time and Kawauch’s PB pace but still on track for sub-2:09. Calm and in control, Kawauchi looked set for his biggest run ever on European soil. 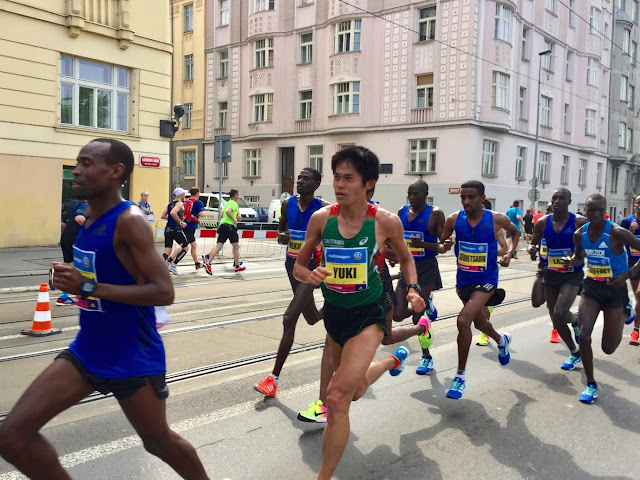 Then, rounding a cobblestoned corner onto a bridge between 32 and 33 km, he tripped and fell. The Ethiopians surged to get away, leaving Bounasr behind in the process, and by the time Kawauchi could get back to his feet he was 15 seconds behind, bleeding from cuts on his hand, hip and leg. The Ethiopians made a series of attacks over the last 10 km to get rid of Kipruto, and in the last two km Worku opened up a lead that looked like it would be enough to give him the win. But Abraha had other ideas, putting on a long surge to pass Worku and take the win by a second in 2:08:47.

With a 2:08:48 for 2nd Worku joined an exclusive club of men with ten or more career sub-2:10 performances. Ayenew ran a PB 2:09:00 for 3rd, Kipruto 4th in 2:09:51 and Bounasr just missing his first-ever sub-2:10 as he took 5th in a PB of 2:10:04. Kawauchi looked like he might return to catch both Kipruto and Bounasr, but with the impact of his fall still resonating all he could manage was 2:10:13 for 6th. Taken straight to the medical area, he received treatment for his cuts and was examined for more serious injuries but was pronounced unhurt. 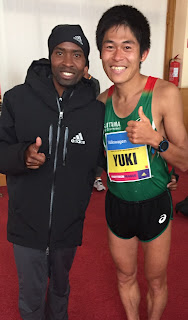 Bitterly disappointed by the fall but trying to find the positive, post-race Kawauchi told JRN, “I thought I could catch the Moroccan but he just wouldn’t come back. Up to 32 km it was the best I’ve ever run in a European race, so in that respect it gives me confidence for London. I’m going to be really sore for the next few days, though.” Besides the confidence of knowing that he ran one of the best, if unluckiest, races of his career in Prague, Kawauchi can take encouragement from having surpassed Suguru Osako’s 2:10:28 from last month’s Boston Marathon to become the fastest Japanese man outside Japan so far this year despite his fall. He also achieved one historic accomplishment, tying the world record of 22 career sub-2:12 marathons held by Ethiopian great Abebe Mekonnen. If he succeeds in doing it again at June’s Stockholm Marathon Kawauchi will singlehandedly hold every sub-x record from sub-2:12 to sub-2:19.

While the men’s race was overall slower than Prague’s usual standards, the women’s race was hot. A quartet of sub-2:23 Ethiopians led by 2:20 women Feyse Tadese and Amane Beriso was expected to take down the 2:22:34 course record set back in 2011 by Kenyan Lydia Cheromei. Two of them succeeded, Beriso running 2:22:15 and Tadelech Bekele a PB of 2:22:23, but in a sight familiar of late, Kenyan Valary Jemeli Aiyabei and a male pacer ran a death-defying first half to put the win way out of the Ethiopians’ reach. Aiyabei and pacer split an incredible 1:08:24 for the first half, no small feat given the difficult first 4 km and other sections full of streetcar tracks and the cobblestones that tripped up Kawauchi’s plans.

Aiyabei paid for the first half with a 1:13:33 on the easier second half, but even so there was littlee chance of her being caught. Aiyabei crossed the finish line with a 2:21:57 course record, a PB by three minutes. Beriso and Bekele did their best to close the gap, Beriso coming within 20 seconds by the end of the race, but it was simply to far to the front. Other Ethiopians took 4th, 5th and 7th to make it five in the top seven, but with a brave and wild run from Aiyabei the women’s race belonged to Kenya. 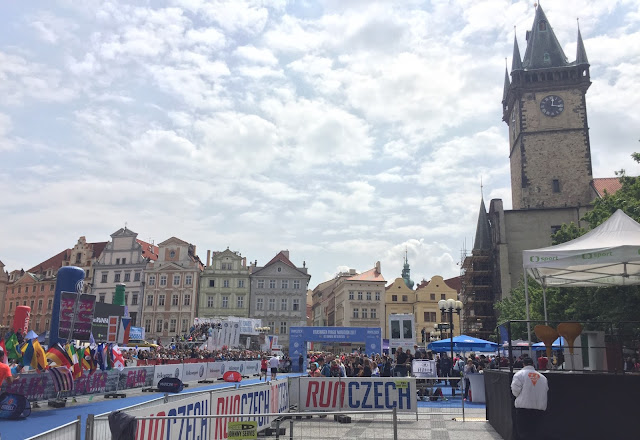 February 05, 2023
In its 75th anniversary race the Marugame Half saw new course records in both the women's and men's races and a near-miss on a new Japanese men's NR. Japan-based Kenyan  Pauline Kamulu soloed a 1:07:22 CR to win the women's race by 49 seconds, 4 seconds under the old CR and her fastest time since her 1:06:56 for bronze at the 2018 World Half Marathon Championships. Rika Kaseda continued to climb the ranks among Japanese women with a 1:08:11 for 2nd, landing her in the all-time Japanese top 10. Australian duo Isobel Batt-Doyle and Sinead Diver were 3-4 just 2 seconds apart in 1:09:27 and 1:09:29. In the men's race a lead sextet of Japan-based Kenyans Alexander Mutiso , Cleophas Kandie and Andrew Lorot , corporate leaguer Tomoki Ota , and collegiate runners Kotaro Shinohara and Reishi Yoshida went through 10 km together in 10 km before splitting into two groups. Lorot fell off the front group before 15 km and Yoshida off the back group by 15 km, leaving Muti
Post a Comment
Read more