For almost the entire race, returning after a typhoon-induced cancellation last year with a 45.1 km course 600 m longer than Komazawa's 2:09:11 course record win version in 2013, Aoyama Gakuin and Komazawa dueled head to head for the title in the first of the Big Three University Ekidens, the crown jewels of Japan's racing schedule.  Komazawa's Keisuke Nakatani, this year's World University Games 10000 m bronze medalist, went to his limit against AGU rival Yusuke Ogura, the World University Games half marathon gold medalist, beating him by 15 seconds to put Komazawa well ahead on the 8.0 km First Stage.

Komazawa's second man Kenya Sonota extended the lead to 24 seconds over the day's shortest run, the 5.8 km Second Stage, but ultra-reliable AGU senior Kazuma Kubota turned it around on the 8.5 km Third Stage with a course record 24:11 to run down Komazawa's Naoki Kudo, 3rd at last year's Ageo City Half Marathon.  Kubota's version of the stage included the 600 m addition to the course, meaning that translated to the old 7.9 km length his time was equivalent to 22:29, 7 seconds under the old course record held by sub-1:01 half marathoner Kenta Murayama, then of Komazawa.  Likewise for Toyo's 2015 National University Championships 5000 m champion Hazuma Hattori, just 2 seconds slower than Kubota further back in the field.

Komazawa's fourth man Shota Baba cut down AGU's lead from 5 seconds to 1 second over the 6.2 km stage against Yuta Shimoda, the fastest-ever Japanese 18-year-old half marathoner after a 1:02:22 PB at March's National University Half Marathon Championships, setting up a thrilling final two stages.  On the 6.4 km Fifth Stage Komazawa's Yusuke Nishiyama was far ahead of AGU's Shun Yamamura on paper, but Yamamura stayed locked to Nishiyama stride for stride, only 2 seconds slower by stage's end.  Kubota earned most respect for his MVP-quality performance, but Yamamura deserves almost as much credit for running well beyond his potential to keep AGU right at the front.

With just a 3 second lead, Komazawa anchor Shohei Otsuka, a 28:34.31 runner over 10000 m on the track, faced 2015 National University Half Marathon champion and World University Games half marathon silver medalist Tadashi Isshiki, 28:23.40 for 10000 m, over the 10.2 Sixth Stage.  Isshiki quickly closed the gap to Otsuka, and through halfway the pair ran close together.  Immediately after crossing halfway Isshiki threw down, gapping Otsuka and never looking back.

Isshiki sailed on solo to cross the finish line in 2:09:05, 6 seconds better than Komazawa's 2013 course record despite a course 600 m longer.  Scaling it to the old 44.5 km course AGU's time was equivalent to 2:07:22, almost two minutes better than Komazawa's old record and mirroring the stunning quality of its record-setting win at January's Hakone Ekiden, even without star member Daichi Kamino.


Otsuka flailed after losing ground on Isshiki, dropping in pace as behind him Kenyan first-year Dominic Nyairo, a replacement for ailing Yamanashi Gakuin University fourth-year Enock Omwamba, gained ground.  With less than than a kilometer to go Nyairo overtook Otsuka for 2nd, bringing much consternation to Komazawa head coach Hiroaki Oyagi.  Thanks in part to Nyairo, whose 28:41 stage-winning time was faster than his track 10000 m best of 28:11.49, Yamanashi Gakuin, sporting a young team of mostly first and second-years, took 2nd 38 seconds back from AGU in 2:09:43, Komazawa another 7 seconds back in 2:09:50.  Along with AGU, both schools' times were under the old course record when adjusted for the extra 600 m.

Top three contender schools Toyo University, Tokai University and Waseda University took 4th through 6th, with Chuo Gakuin University outrunning the strong Meiji University for 7th thanks to a 15:51 course record for the 5.8 km Second Stage run by this year's 3000 m steeplechase national champion Hironori Tsuetaki.  Toyo and Tokai joined the top three in breaking the old course record on adjusted time, an indication of the both the high quality of the field and the luck of many of the best schools to be racing head to head throughout the entire ekiden.

With lead off runner Sam Pons running 23:20, faster than the stage winning time the last two Izumo Ekidens but only good enough for 9th this year, the American Ivy League Select Team ran in 11th through most of the race before unexpectedly returning to 9th thanks to a strong run from anchor James Leakos.  Kyoto Sangyo University scored a moral victory of sorts with a 10th-place finish, outrunning Kanto region schools Daito Bunka University and Josai University to finish as the best non-Kanto school in Japan. 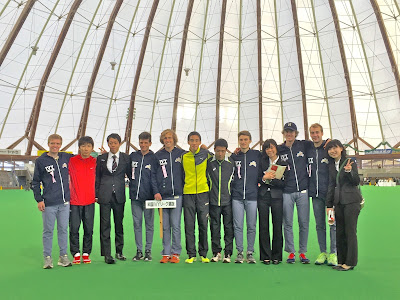 University ekiden season continues on Saturday with the Hakone Ekiden Yosenkai qualifying race in Tokyo's Showa Kinen Park.  AGU, Komazawa and the top Kanto region schools will next meet up at the Nov. 1 National University Ekiden.  After such a dominant performance there's little doubt that AGU is well on its way to a rare triple crown win this season.