Aoyama Gakuin ended last season with a course record-breaking win at the Hakone Ekiden and has only gotten stronger since then, all in line with head coach Susumu Hara’s long-term development plan for Aoyama Gakuin to become the best in Japan this season with the full maturing of his core group of seniors. At the Oct. 12 Izumo Ekiden Aoyama Gakuin ran six seconds faster than Komazawa’s course record despite a 600 m longer course, effectively two minutes faster minus the extra section on one stage, and without the runner who gave them the Hakone record, captain Daichi Kamino.

Izumo had six stages with an average length of 7.5 km and maxing at 10.2 km. The National University Ekiden has eight stages averaging 13.4 km and a 19.7 km anchor stage that approaches the kind of half marathon distances that make up Hakone and the focus of Japanese university men’s training. Where Izumo was short and fast, Nationals requires more of a balance between 10000 m speed and half marathon stamina. With Kamino back at the top of its entry list Aoyama Gakuin dominates in both. 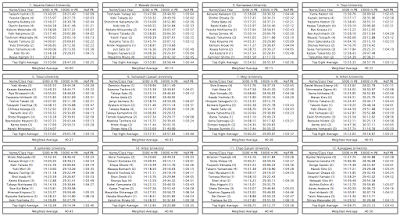 Aoyama Gakuin's best eight men average 28:47.29 for 10000 m and an incredible 1:02:25 for the half marathon, far ahead of Komazawa and every other school, and still with four quality alternates to back up the main lineup. Only three teams have ever won the Big Three in a single season and only Waseda University has ever done it with course records at all three. At Nationals it’s not a question of whether Aoyama Gakuin will win, but how much they are going to take off the 5:12:43 course record Komazawa set in 2012. If every team member runs up to potential the numbers say 5:11:49. From there Aoyama Gakuin’s own Hakone record awaits.

Komazawa has a solid shot for 2nd with its main challenger being Waseda. Waseda has a slight advantage on paper with stronger half marathon credentials, but at Izumo it lacked captain Koki Takada and most of its other best were sub-par. Combined with Komazawa’s superiority over 10000 m Waseda will need a perfect day to outrun Komazawa, who will need more than a perfect day to challenge Aoyama Gakuin. Toyo University and Tokai University are ranked 4th and 5th, the same places they finished in Izumo and with a similar margin.

The seeded bracket, guaranteeing a return trip to Nationals in 2016, runs six-deep, and Izumo runner-up Yamanashi Gakuin University occupies the #6 pre-race ranking with a small margin of safety. Yamanashi Gakuin’s success at Izumo came in large part thanks to a soaringly brilliant anchor run from first-year Dominic Nyairo, a sub for ailing fourth-year Enock Omwamba. Despite Nyairo’s lack of experience over longer distances the lack of sub-1:03 half marathoners in Yamanashi Gakuin’s current roster means head coach Masahito Ueda will probably run him on the 19.7 km anchor stage. If he handles it like he did Izumo look for Yamanashi Gakuin to finish much higher than 6th. If not, three more schools, Meiji University, Nihon University, and Juntendo University will be there to pick up the slack.

Because the sheer scale of Hakone prestige draws so much high school talent to the Kanto Region universities it’s very unusual to see a school from anywhere else in the country make even the top ten at Nationals. The Kansai Region’s Kyoto Sangyo University pulled it off in Izumo, taking 10th with cross-town rival Ritsumeikan University 19 seconds back in 11th, but coming into Nationals ranked 16th and 17th it will be tough for either to match Kyoto Sangyo’s 12th-place finish last year.  New on the entry list this year, the National University Select Team features Kansai Region half marathon record holder Kentaro Hirai (Kyoto Univ.) and strong Kanto Region runners Sho Tokunaga (Chuo Univ.) and Kenta Muto (Kokushikan Univ.).

The National University Men’s Ekiden Championships will be broadcast live nationwide on TV Asahi starting at 7:00 a.m. on Sunday, Nov. 1. Look for full results and exclusive coverage on JRN post-race.