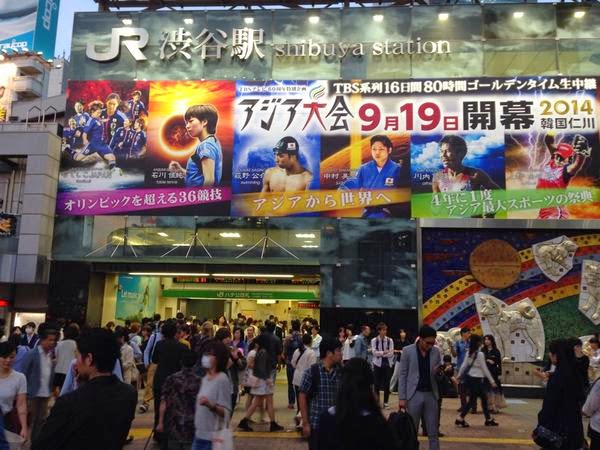 With over half the world's population represented making it the biggest of the world's regional championships, track and field events kick off September 27 at the 2014 Asian Games in Incheon, South Korea.  It's a reality of the region that Bahrain and Qatar field distance teams virtually entirely made up of Ethiopian and Kenyan athletes who duly take home most of the medals, but with Japan hosting the 2020 Olympics it is not screwing around, sending its best talent to what Japanese broadcaster TBS is hyping as "The Asian Olympics."

The women's 10000 m, men's 5000 m and women's 30000 m steeplechase get things moving on the 27th.  Complete start lists are as yet unavailable, meaning updates to this preview in coming days, but in the absence of Moscow World Championships women's 10000 m 6th-place Shitaye Eshete (Bahrain), Japan's sub-32 pair of Ayumi Hagiwara (Team Uniqlo) and Kasumi Nishihara (Team Yamada Denki), the only two women in the field to have run under 32 this year,  should be in it for medals against Bahrain's Eunice Chumba and Tejitu Daba, China's Chaofeng Jia and India's Preeja Sreedharan.

The men's 5000 m should be a blowout for sub-13 Bahraini Kenyan Albert Rop, with Japanese national champion Yuki Sato (Team Nissin Shokuhin) a potential medal candidate on paper against Bahrain's Alemu Bekele, Qatari Abubaker Ali Kamal and Saudi Arabia's Tariq Ahmed Al-Amri. Likable Kanto Region University 10000 m champion Kota Murayama (Josai University) will need a slow race to factor in, but with a brand-new 3:39.56 best for 1500 m to his name don't expect him not to go for it.

Japan's young pair of Misaki Sango (Suzuki Hamamatsu AC) and Mayuko Nakamura (Tsukuba Univ.) represent in the women's steeple, where they are ranked 2nd and 4th on the all-time Japanese list.  Bahrain's Ruth Jebet is the heavy favorite, all-time #2 in Asia with a 9:20.55 season best almost 30 seconds better than Sango's PB.  India's Lalita Shivaji Babar and Sudha Singh, both with season bests between Sango and Nakamura's time, should also have a chance at breaking into the medals.  China's Zhenzhu Li has the second-best PB in the field at 9:32.35, but with no mark this season her fitness remains to be seen.

Men's steeple national champion Jun Shinoto (Team Sanyo Tokushu Seiko), a stage record holder at the prestigious Hakone Ekiden, races on Sept. 29.  He'll be hard-pressed to be in contention for a medal if Qatar's Abubaker Ali Kamal starts alongside Bahrain's John Kibet Koech, both sub-8:20 this season to Shinoto's 8:32.89 best, the outcome largely depending on the fitness of Bahrain's two-time Asian Games gold medalist Tarek Mubarak Taher who has not raced this season.

Japan's best chance for a distance gold medal comes the morning of Oct. 2, when Moscow World Championships women's marathon 4th-placer Ryoko Kizaki (Team Daihatsu) goes up against Bahrain's Eunice Jepkirui Kirwa, the ink on whose transfer of nationality is still drying.  Kizaki ran 2:23:34 last year to make the Moscow team and comes to Incheon with a 2:25:26 in Nagoya this year, while Kirwa, with a 2:21:53 best, has not broken 2:30 yet this year.  It's hard to see Kizaki not medalling, and if Kirwa is fit it should be a great head-to-head.  Japan's Eri Hayakawa (Team Toto) will have her hands full in getting into the medals with up to four athletes from North Korea, South Korea and China within two minutes of the 2:25:31 best she set behind Kizaki in Nagoya in April.

All-time Japanese #3 and #4 Yuki Sato and Suguru Osako, both graduates of Nagano's Saku Chosei H.S. and teammates at the Nissin Shokuhin corporate team as of April, line up beside each other once again in the men's 10000 m.  Sato has made a cottage industry of sitting on Osako and outkicking him in the last 100 m at the National Championships for the last three years, but with Osako fresh from a 3000 m national record in Italy earlier this month off a period training with Olympic gold and silver medalists Mo Farah (U.K.) and Galen Rupp (U.S.A.) hopefully he won't just hand the reins to the older Sato again this time.  Both have bests of 27:38 that put them in good position against Bahrain's El Hassan El Abassi (27:32.96) and Isaac Korir (28:05.46), the primary variable being who, if anyone, Qatar has up its sleeve.

Athletics events wrap up the morning of Oct. 3 with the race most non-Japanese distance fans will probably be looking forward to most, the men's marathon.  There is no question that Bahrain's Shumi Dechasa, another brand-new nationality transfer, is the heavy favorite, having won May's Hamburg Marathon in a PB 2:06:44 and bringing a handful of 2:07s along with that.  Even at their best Japan's Kohei Matsumura (Team Mitsubishi Juko Nagasaki) and Yuki Kawauchi (Saitama Pref. Gov't) would need Dechasa to run a relatively slow race to compete against him; Dechasa easily beat Kawauchi both in Hamburg and in Kawauchi's 2:08:14 PB run in Seoul last year.  Japan-based Mongolian Ser-Od Bat-Ochir, who ran his 2:09:00 PB while beating Kawauchi for the win at last year's Hofu Yomiuri Marathon, is also in the field along with Bahraini wildcard Mahboob Ali Hassan Mahboob, who seems to be debuting at the marathon, and if Qatar sends its current best two Yaser Belan Mansour and Essa Ismail Rashed it could be a very solid sub-2:10 pack up front.  Despite the challenges foreign and domestic, Kawauchi remains dead-set on gold, and if both he and Kizaki, or their teammates Matsumura and Hayakawa, succeed it will be a major boost for the six years to come.

Look for extensive coverage of the Incheon Asian Games on JRN throughout the week, and be sure to enter the marathon prediction contest by the Oct. 2 deadline for the chance to a custom marathon medal wall display made by Runners' Wall bearing Kawauchi's motto "Genjou Daha," "Make a Breakthrough," and other great prizes.

Anonymous said…
Go Japan, go! Thanks to Brett's good work, the Japanese athletes are the only ones I know and the only ones that count for me. Good luck Japan!
September 26, 2014 at 9:45 PM