This One Goes Up to Eleven 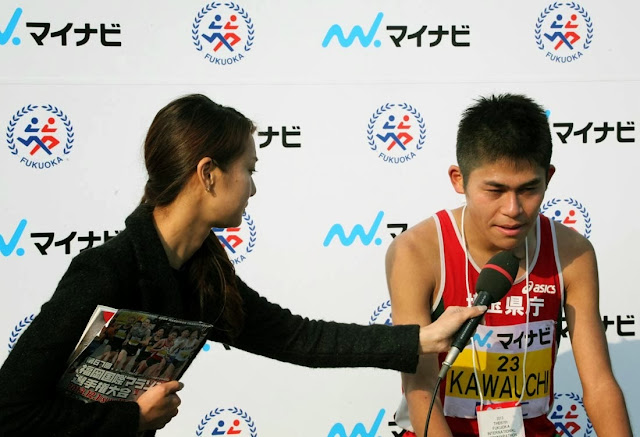 Boldly saying that he wanted “to go where nobody has gone before,” with his 2:09:15 second place finish at the Dec. 15 Hofu Yomiuri Marathon independent Yuki Kawauchi (Saitama Pref. Gov’t) completed his eleventh marathon of the year, an historic accomplishment in more ways than one. Two of his marathons were sub-2:09, four sub-2:10, six sub-2:12, one a national all-comers’ record, two PBs, four course records, five wins and eight top-three finishes. All while faced with an endless chorus of people telling him that it's such a fine line between brilliant and stupid, that he can’t keep getting away with this kind of craziness.

On the individual level he set world records twice for the shortest time ever between sub-2:10 marathons, taking one day off the record when he ran 2:08:14 and 2:08:15 forty-two days apart in March and February and then knocking an unthinkable twenty-eight days off that record with his 2:09:05 at the Dec. 1 Fukuoka International Marathon and the 2:09:15 in Hofu fourteen days later. He also joined national record holder Toshinari Takaoka as only the second Japanese man to break 2:10 six times in his career, and with four sub-2:10s this year he is the only one to do it more than twice in one year.

He narrowly missed two other historic achievements when he ran 2:10:01 gross time at the July 7 Gold Coast Marathon. At Gold Coast Kawauchi politely went to the start at the appointed time, but due to the narrowness of the start line he was pushed further and further back as latecomers came to the line after him. Being too polite to elbow his way back he was also not pulled back to the starting line by race organizers, meaning that he started from the third row and lost what proved precious seconds. His 2:09:58 net time would have made him only the sixth Japanese man in history to win an overseas marathon sub-2:10 and would have meant that Hofu surpassed Takaoka’s career record of sub-2:10 performances. Shoulda coulda woulda.

On a national level Kawauchi played a large role in Japan having its fifth year on record with at least ten sub-2:10 marathons, giving his nation its 2nd, 3rd, 6th and 10th-fastest marathons of the year. All of the top ten fastest marathons by Japanese men were between 2:08:00 and 2:09:15, Japan’s best-ever for depth but, with no 2:07 performances, only its second-fastest top ten average, 2:08:46, after 2003’s 2:08:34 average. Kawauchi’s Gold Coast time was the eleventh-fastest of the year.  It’s clear what an impact he had by looking at the list of the top eleven fastest Japanese marathons of the year minus Kawauchi’s performances.

Although the rest of the country’s depth was of course greater, at the top end it was almost even, with two 2:08s and two 2:09s (three, really) from Kawauchi vs. three 2:08s and three 2:09s from the rest of the country.  In fact, at the national level only Kenya, Ethiopia and Japan had more sub-2:10 marathons this year than Kawauchi, with Eritrea and Uganda coming in at four each.  It’s even more informative to compare Kawauchi’s record for 2013 with the top eleven marathons run by U.S. athletes.

Only one American, World Half Marathon and World Cross Country medalist Dathan Ritzenhein, broke 2:10, with Ritzenhein’s time of 2:09:45 coming in at fifth on Kawauchi’s list. You have to go down to the ninth-fastest marathon on each list to find an American time faster than Kawauchi’s equivalent run, even including numerous American performances on historic aided one-way and/or downhill courses. In all of American marathoning history only two years have equaled Kawauchi’s 2013, 1983 with four sub-2:10s by American men and 2012 with five. Kawauchi is exceptionally tough, but one self-coached athlete working a full-time job being able to beat an entire country capable of producing world-level distance medalists on the track surely points to serious systemic problems.

Speaking of problems, there are issues for Kawauchi to work out. His only two bad marathons of the year, a 2:15:35 for 18th at August’s Moscow World Championships and the 2:12:29 he ran for 11th with support from JRN at November’s New York City Marathon, were also the two biggest races he ran this year. Writer Anna Novick, who interviewed Kawauchi for the Wall Street Journal following his 2011 breakthrough, has suggested that he runs best in races where there are only one or two main competitors and has trouble coping with large packs, but while there may be some truth to this it is also true that Moscow and New York featured significant time zone differences from Japan where all but one of his other marathons did not. Both Moscow and New York were three to four minutes off his target time, the same margin as in his European debut at last year’s Dusseldorf Marathon, and similarly at both September’s Great North Run and last year’s World Half Marathon Championships he was one and a half to two minutes off target. It’s true that he ran well solo at the Egyptian Marathon and poorly at the Daegu World Championships, lending support to Novick’s take, but in general Kawauchi has thus far shown a consistent margin of deficit when racing with jet lag. This will be one of the main issues for him to solve in his international marathons next year, of which at least three are currently planned.

Kawauchi’s year went up to eleven, but there’s a further push over the cliff. Nestled in between the 2:08:15 and 2:08:14 was his most-overlooked performance of the year, a 1:29:31 course record win at the Kumanichi 30 km over three of Japan’s best young talents, two in the Japanese all-time top ten for the half marathon and the other a sub-28/sub-62 collegiate. To say nothing of Kawauchi's third-straight time running June’s Okinoshima 50 km ultramarathon or his second course record at July’s Kushiro Shitsugen 30 km. What will 2014 hold? Along with finally getting that elusive 2:07, one of his main goals is winning a rematch vs. Hofu winner Serod Bat Ochir of Mongolia for Asian Games gold. It’s safe to say there will be much more, and he won’t waste any time getting started. Look for Kawauchi to go for his first sub-29 on the road or track when he runs Madrid’s San Silvestre Vallecana 10 km on New Year’s Eve.

http://bobhodge.us/race-remembrances/ said…
I congratulate Yuki Kawauchi on his atavistic endeavor.

Unknown said…
Another observation (probably pointing out the obvious) but Kawauchi also has that ability to focus on giving 100% at every race.He races a lot, but none of those races are "junk" miles. I suppose this is a natural consequence of his personality and training style of "only" running once a day.
Well, I'm just in awe of this guy and can't wait to see what he does in 2014!
December 16, 2013 at 8:46 AM

TokyoRacer said…
Race directors take note. This year there were a few open weeks on his calendar. I'm sure he'll be open to entering your event.
December 17, 2013 at 2:08 AM

bagdaddy said…
More impressed with the ability to not break down mentally, get sick, or injured whilst travelling and running really fast nearly every weekend. Any American professional distance runner would be happy to have his list of race performances this ONE year for their entire career. Great effort. Inspirational.
December 18, 2013 at 11:57 AM