Mathathi Makes Transition to Marathon in Fukuoka, Kawauchi 3rd in Third Sub-2:10 of 2013

After giving up late in the game last year, 2007 Osaka World Championships 10000 m bronze medalist Martin Mathathi (Kenya/Suzuki Hamamatsu AC) got it right Dec. 1 at the 67th Fukuoka International Marathon, going to the front at the turnaround near 31.5 km and never looking back as he took the win in 2:07:16.  Defending champion Joseph Gitau (Kenya/Team JFE Steel) tried to go with him but faded  in the final 5 km to finish 2nd in 2:09:00.  After a stunning mid-race move in his tenth marathon so far this year, Yuki Kawauchi (Saitama Pref. Gov't) became the first Japanese man ever to break 2:10 three times in the same year and the sixth to break 2:10 five times in his career as he took 3rd, bearing down on Gitau in the last km but coming up just short of catching him in 2:09:05. 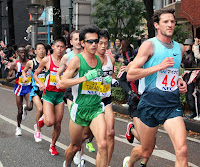 Aussie pacers Collis Birmingham and Ben St. Lawrence took things out on target with a large pack just off 3:01/km pace.  Alistair Cragg (Ireland) was the first major casualty, off the back of the lead group before 5 km.  Debuting former Nihon University ace Benjamin Ngandu (Kenya/Team Monteroza) was next, out of contention by 10 km and followed in short order by frontrunning independent Sho Matsumoto (Nikkei Business).

The first major break in the race came at a short up-down overpass just before 16 km.  Heading up the steep slope the pack fractured, with Mathathi, Gitau, top-ranked Japanese man Arata Fujiwara (Miki House), Reid Coolsaet (Canada), Ayad Lamdassem (Spain) and Koji Gokaya (Team JR Higashi Nihon) hanging back as the others in the front group pushed on ahead.  Fujiwara, looking uncomfortable in his first marathon since Fukuoka last year, began to slip back, then slowed to a walk, then dropped out just past 20 km. "Something wasn't right," he told JRN post-race.  "It wasn't that it felt hard, my running just felt soft and disconnected, not right.  It was the worst marathon I ever ran."

As Mathathi and Gitau regained contact with the leader group, Birmingham and St. Lawrence prepared to step off at halfway, hitting the line in 1:03:48.  The second they did, Kawauchi shot to the lead with a surge that opened a 10-second gap on the lead group by 22 km, a stunning move that came almost exactly at the point where he lost touch with the lead group last month at the New York City Marathon.  Polish national record holder Henryk Szost, 3rd last year in Fukuoka, was the only one to go after him, gaining contact at 23 km.  The pair traded surges as the pack treaded water, Juan Luis Barrios (Mexico) unable to hang on once the gradual push to catch up came.

Popular former Hakone Ekiden star Mekubo Mogusu (Kenya/Team Nissin Shokuhin) led that push after 25 km, bringing the chase pack of Mathathi, Gitau, 5000 m and 30 km national record holder Takayuki Matsumiya (Team Konica Minolta) and Chiharu Takada (Team JR Higashi Nihon) in contact by 28.5 km.  Despite a pre-race promise to keep his head until 35 km, Mogusu shot past Kawauchi and Szost to open a lead, Szost again attempting to go with him.  The entire pack passed Kawauchi, but he quickly responded and tucked back in to the middle of the group, face locked tight in a grimace as the others looked relaxed, Mathathi most of all. 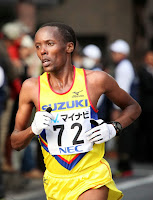 Rounding the turnaround between 31 and 32 km Mathathi went to the front for the first time.  The pack quickly strung out single-file, Szost yet again in the wingman position with Gitau at the rear and Kawauchi just ahead.  A sloppy water station pickup left Gitau 5 m behind, but the second he regained contact Kawauchi shot up the outside to move back toward the front of the group.  Gitau followed, leaving Matsumiya drifting away behind and five in pursuit of Mathathi.

With Mathathi splitting 2:57 from 33 km to 34 km, Gitau realized the precariousness of his position and moved up next to him.  Not eager for a replay of last year, Mathathi accelerated again to burn him off, dropping the rest of the group for the first time and opening 10 seconds by 35 km.  At 35 km he went into still another gear, saying goodbye to Gitau for good.  Kawauchi, Szost and Takada trailed Mogusu,  but at the 36 km water station Szost made his own move and away.  Kawauchi was right on him, hammering past at 37 km and inching away free into 3rd. 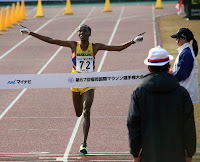 Mathathi was superb after 35 km, splitting a solo 14:39 from 35 to 40 and 6:24 from 40 to the end, the second-fastest closing split in Fukuoka history and just 7 seconds off Tsegaye Kebede's split from his course record run, for a 26-second negative split and the win in 2:07:16.  After looking like he was jogging for the first 31.5 km he clearly has plenty in the bank for more.  Add him to the list of people to watch out for in the spring.

Gitau, who ran poorly in fall ekiden season, slowed in the final stage.  Looking back on the final corner to see Kawauchi bearing down on him e almost jumped in surprise.  Rallying for a push on the track. he held on to 2nd, just missing a sub-2:09 clocking in 2:09:00.  Staggering after finishing, he had obviously given the best he had on this day.

Kawauchi paid for his move halfway through the race with his slowest 5 km split of the race, 15:53, before dropping his characteristic closing speed to run 6:50 from 40 km to the finish, the second-fastest in the field behind only Mathathi.  "I shouldn't have taken off like that," he told the media post-race.  "I was shooting for time so I wanted to shave the pack down to five or six people, but I ended up spending everything there." Post-race he told JRN, "That was a truly painful race.  I have to try harder in the future."

Nevertheless, with ten marathons in him so far this year Fukuoka earned him a place in the Japanese history books and, maybe, a place on the Japanese team for next year's Asian Games.  Kawauchi had publicly said before the race that if he failed to make the Asian Games team in Fukuoka he would remove himself from consideration from all future World Championships and Olympic teams after running poorly at two straight World Championships and one World Half. Having come up far short of his 2:07:30 goal and visibly crushed post-race, it would not be a surprise to see him stick to his guns and turn down a place on the team despite running one of the gutsiest races of his career and again bettering the best the corporate leagues can offer.  For their part, Federation officials were unambiguous about their opinions of his performance.  Executive director Mitsugi Ogata said, "I was deeply moved. Kawauchi showed absolute spiritual and physical strength. He was superb. He may become Japan's greatest marathoner." Director of men's marathoning Takeshi Soh commented, "He has shown consummate professionalism as a marathoner."  Either way, look for him to take a shot at tying national record holder Toshinari Takaoka's career record of six sub-2:10 marathons two weeks from today in Hofu. 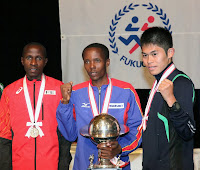 Szost held on to 4th, sub-2:10 for the third time in Japan in 2:09:37 with Takada just over a minute back in a sizeable PB of 2:10:39 for 5th.  One of the surprises in the race came next as Canada's Coolsaet kept calm after losing touch with pack at the 16 km uphill, running steadily alone and picking off faders one at a time.  Passing Mogusu with a kilometer to go he took 6th in 2:11:24, the third-best time of his career. "I'm happy with 6th," he wrote post-race on his blog. "I have no regrets [about] going with the lead pack even if it wasn't the best move in hindsight." Mogusu's move between 25 and 30 km cost him dearly as he shuffled in 39 seconds back from Coolsaet in 7th.

Cragg made it to the finish line for the first time, 26th in 2:23:05 just ahead of Kawauchi's youngest brother Koki Kawauchi (Takasaki Keizai Univ.) who clocked a PB 2:24:13.  Back among the masses,  half marathon national record holder and all-time #4 Japanese marathoner Atsushi Sato (Team Chugoku Denryoku) finished the final marathon of his career in 2:33:00.  Having set his best of 2:07:13 six years ago in Fukuoka against a debuting Samuel Wanjiru (Kenya/Team Toyota Kyushu), Sato's run marked the end of one era of Japanese marathoning.

Unknown said…
Hope Fujiwara comes back soon. I wonder what was behind Kawauchi's スパート right after the half-way mark...
December 1, 2013 at 6:34 PM

Hywel Care said…
Although I didn't quite get what I hoped for from the race, I brought my marathon PB to a more respectable level, and I have to say I loved experiencing this famous race. The support is great, both from the roadside, and from the rear windows of the traffic that is still flowing on the opposite carriageway on the wide roads in Fukuoka! The atmosphere is pretty unique, as it has the support and media profile of a big city marathon but with the easier logistics of catering to a small but select field that improves the experience as an athlete. This combined with its competitive depth as a marathon makes it worth experiencing. Thanks Brett for the coverage of this great race.
December 2, 2013 at 11:01 PM