Former Hakone Ekiden uphill specialist Masato Imai (Team Toyota Kyushu) had the best results of the day among the three Japanese athletes at the 2013 ING New York City Marathon, running a steady pace to advance to 6th in 2:10:45, the best-ever performance by a Japanese man in New York.  The Koichi Morishita-coached Imai and, appearing with support from JRN, independent Yuki Kawauchi (Saitama Pref. Gov't) stayed in the midst of the men's lead pack running into the wind throughout the first half of the race. When defending champion and eventual winner Geoffrey Mutai (Kenya) led a move at 22 km both Imai and Kawauchi fell off the group along with past New York champions Meb Keflezighi (U.S.A.) and Martin Lel (Kenya) and 2013 New York City Half Marathon runner-up Daniele Meucci (Italy).

Imai showed characteristic uphill strength heading onto the Queensboro Bridge just before 25 km, remaining within 10 seconds of the lead group after the turn onto 1st Avenue.  Keflezighi and Lel soon vanished from contention, leaving Kawauchi and Meucci together for the next 15 km.  As stragglers began to come back following the carnage of New York's characteristic First Avenue surge Imai held onto a steady pace, picking up places one by one and coming just shy of overtaking 2:05 man Stanley Biwott (Kenya) for 5th.  His final 6th place finish in 2:10:45 was one step up from the top Japanese showings in Berlin, where Suehiro Ishikawa (Team Honda) was 7th in 2:10:24, and Chicago, where Hiroaki Sano (Team Honda) was 7th in 2:10:29, particularly given that unlike Ishikawa and Sano he ran in the unpaced lead pack rather than a carefully-controlled second pack. 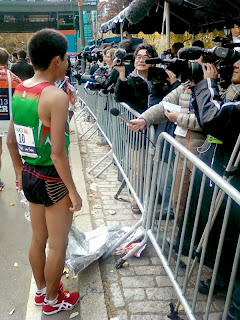 Kawauchi was unable to bring his characteristic strong finish and lost touch with Meucci at 40 km nearing the exit from Central Park.  Down to 12th place, he overtook defending Olympic and World Championships gold medalist Stephen Kiprotich (Uganda) at Columbus Circle with less than 1 km to go to move up to 11th in 2:12:29.  "Passing the Olympic and World champion was the only outcome I can really take any satisfaction from today," Kawauchi told JRN post-race.  "I beat Keflezighi, but I wanted to race him when he was strong so it doesn't really count.  I thought that even in a worst-case scenario I would make the top ten, so it's very disappointing that I couldn't stay with Meucci and ended up 11th.  If I had been able to run a race like Imai did, steady after 25 km and moving up late in the race, it would have been a much better result."

"But, this was my first time racing in the U.S. and in a race of this level.  The field here was stronger than either of the World Championships I've run in and I placed better here than I did in either Daegu or Moscow, so it wasn't all bad.  And I did better than Arata Fujiwara (Miki House) did in 2010." [laughs]

"I learned a lot too.  Before the race Keflezighi told me that he has done marathon-distance training runs in 2:25 at 4000 m elevation, so he said he doesn't think my approach of using marathons as training is strange.  Coming from an Olympic medalist that's very encouraging.  During the race I was keying off Kiprotich and watching Mutai and Tsegaye Kebede.  Mutai spent a lot of time going to the front and dropping back over and over.  I think if he had focused on running more steadily he would have had a better result.  I have more respect for the way Kebede ran, biding his time and not wasting his energy before making his move, even if he didn't win.  But I learned a lot from watching both of them."

"With this behind me I think I could do a lot better next year if they wanted me back.  I really liked the focus on racing without pacers. It's much better than the kind of heavily-controlled time trials we have in Japan. The atmosphere was amazing too. The screaming crowds put Tokyo to shame."

In the women's race, London Olympian Risa Shigetomo (Team Tenmaya) equalled Kawauchi's 11th place finish in 2:31:54.  Running in the lackadaisical second pack far behind early leaders Buzunesh Deba and Tigist Tufa Demisse of Ethiopia, Shigetomo lasted until the Queensboro Bridge when she fell behind on the long uphill.  She ran on solo from there to the finish.

TokyoRacer said…
Disappointing but not unexpected that the clueless race announcers did not even notice Imai finishing in 6th, just behind Biwott. And of course they did not realize that he had been the one shadowing the lead pack, in 11th, then falling further back, then fighting back to 6th, It was the gutsiest performance of the race, but went entirely unnoticed and unmentioned.
It's bad enough that ESPN or whoever don't want to use announcers who actually know the runners, but can't they have someone on hand who does? Someone to pass them notes saying, "Mention what a great race so-and-so is running." "Mention how Kawauchi, who is very popular and was featured in a NY Times story, is doing." Wishful thinking, I suppose.
November 4, 2013 at 8:53 AM

Brett Larner said…
I keep thinking I should start documenting instances of the "Invisible Japanese" phenomenon as it's a fairly interesting variety of subtle racism and pervasive in American coverage whenever Japanese athletes run. This time throughout much of the time that Imai was running alone in 10th ESPN's on-screen leaderboard said Meucci, who was far behind running against Kawauchi in 12th, was in 10th instead of Imai.

Another favorite was this year's NYC Half when Kenta Murayama was the one to lead the breakaway after 5 km that got the race moving. The race broadcaster said in a voiceover of footage of Murayama leading by a large margin with Barrios of Mexico 10 m or so behind and a larger gap to the pack, "And here's Juan Luis Barrios of Mexico leading the breakaway." To their credit the NYRR eventually edited that part out of the highlights video.

Cf. also Flotrack's universal tendency to say every leading athlete's name except the Japanese, who are designated "one of our Japanese athletes."
November 4, 2013 at 11:57 AM