On a busy weekend featuring at least seven major events across the country, Japan's biggest race of the weekend took place northwest of Tokyo in Saitama.  With perfect conditions for its 26th running, the Ageo City Half Marathon, consistently one of the world's deepest halves as a consequence of being the unofficial tryout race for Japan's biggest sporting event, the Jan. 2-3 university men's Hakone Ekiden, saw a dramatic race with five men battling to the line to make history.   In a relationship set up by JRN, two invitations to run March's New York City Half Marathon were up for grabs for the first two Japanese collegiate finishers, and, having seen the effect on last year's Ageo winner Kenta Murayama (Komazawa Univ.) who returned from finishing 10th in New York in 2013 to set course records at both the Izumo Ekiden and National University Ekiden Championships, the field responded en masse. 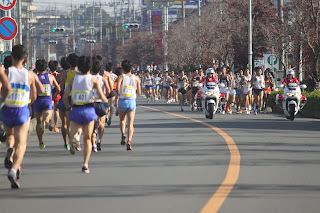 The race started with a mishap that spelled disaster for one school, as an A-list member of Josai University's Hakone team fell at the start, was trampled underfoot by the dense pack behind, and was rushed to the hospital in an ambulance with a broken collarbone and other injuries.  Sailing on and skimming right around 3:00 min/km pace, a lead pack of around seventy hit halfway in 31:34, on track for a 1:03:08 finish time, without any clear leaders. Koki Takada (Waseda Univ.), Keigo Yano (Nittai Univ.), Takayuki Maeno (Meiji Univ.), Ikuto Yufu (Komazawa Univ.), Norihisa Imai (Toyo Univ.), Duncan Muthee (Takushoku Univ.) and others took turns in the three to five-wide front line but none exerted true pressure until Imai began to push after the halfway mark.  By 15 km the lead group was down to thirty, all university men in the hunt for both places on their schools' Hakone Ekiden teams and tickets to New York except for former Hakone Ekiden Select Team teammates Aritaka Kajiwara (Team Press Kogyo) and Yuki Kawauchi (Saitama Pref. Gov't). 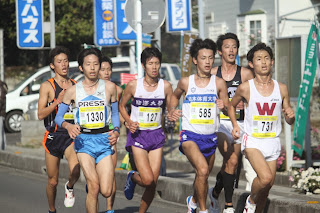 Rounding a corner with 3 km to go Yufu attacked, with Takada immediately responding and going to his side.  Yano and Kajiwara quickly took over, with a handful of others latching on to make a lead group of seven dipping into 62-minute territory. Yufu soon faltered and dropped as the pace continuously increased, but with 1 km to go the other six men were still locked tight as Kajiwara, Takada and Kazuto Nishiike (Hosei Univ.) hit each other up front.  600 m to go and Maeno dropped.  500 m to go and Takashi Ichida (Daito Bunka Univ.) craftily came up behind leader Nishiike from the rear of the pack for the first time.  400 m to go and Nishiike, 0.02 out of the medals at the 2010 Youth Olympics 3000 m, surged on the corner leading onto the track.  All five men were onto the track within one second of each other, but while Nishiike and Kajiwara fought for control Ichida put on an incredible surge in the home straight to catch them both at the line in a photo-finish. Nishiike and most spectators thought he had won it, but on review of the finish data the title went to Ichida with both he and Nishiike timed at 1:02:36, making it the third-straight year that an identical twin runner took the top Japanese collegiate spot in Ageo. 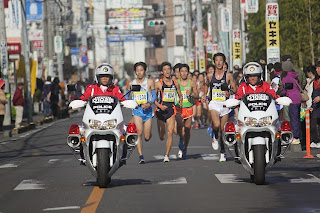 Kajiwara was 3rd a stride behind in 1:02:37, just outrunning Takada who took 4th in 1:02:38. Redeeming himself for an anchor stage breakdown two weeks ago that cost 2013 Hakone Ekiden champion Nittai University a seeded top three finish at the 2013 National University Ekiden Championships, Yano was 5th in another photo finish with Takada in a PB 1:02:38.  Almost everybody in at least the top twenty ran a PB or debut.  Just two weeks after running the New York City Marathon Kawauchi ran his fastest half marathon of the year, 1:03:06, just four seconds slower than he ran last year in Ageo when he finished 3rd. This year he was 20th. 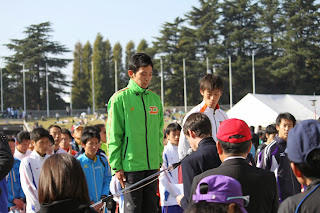 In its first 25 years Ageo had seen a total of thirty-six men run under 63 minutes.  Eighteen more joined their number today, the most ever in a single year of Ageo history and all but Kajiwara university athletes.  Aided by perfect conditions and given extra drive by the New York Half's big apple on a stick, the results were rich in import for the Hakone Ekiden, whose coaches use Ageo to pare down their rosters to the final entry list they will submit in a month's time.  Waseda University was the big team winner of the day, with four of its younger runners clocking sub-63 bests. Nishiike's Hosei University continued its steady development over the last year and a half with three men, including Nishiike, under 63.  Even favorite Komazawa University benefitted from the day, with Komazawa 1500 m and 10000 m record holder Yufu recording the second-fastest time of his career, 1:02:51 for 7th, and first-year Yusuke Nishiyama debuting in a solid 1:02:54 for 10th.  Overall depth returned to the kind of legendary numbers Ageo has not seen since 2006:

All told it added up to the greatest day in Ageo's 26-year history. 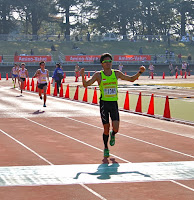 That history received an additional footnote as Singaporean Mok Ying Ren ran 1:07:53 to set a new national record.  The time, which put him 301st, also earned him a place at March's World Half Marathon Championships, the first time an athlete has ever qualified for a national team at Ageo.  Mok Ying Ren next races at December's Southeast Asian Games marathon in Myanmar where he is one of the favorites for the win.

Unknown said…
Hi Brett , what a great site you have. The report on the Aego Half marathon is amazing .The depth of talent in the race is astounding .
I have alerted everyone to your resource ! Congratulations . Malcolm
November 19, 2013 at 7:41 PM

Anonymous said…
Could the minister of sport in japan consider coming to ireland!
November 20, 2013 at 7:58 PM