Click here for video of the 2009 Hakone Ekiden Qualifier.

Japan's Monday morning network news talk programs devoted lengthy segments to discussing the outstanding results from Saturday's university men's Hakone Ekiden Qualifier 20 km road race, which featured the 9th through 55th-ranked schools in the Kanto region. At the same time, American fan websites were buzzing with discussion of the results of Saturday's big university pre-National cross-country meets. How did the results compare between the top schools and runners in the two countries? 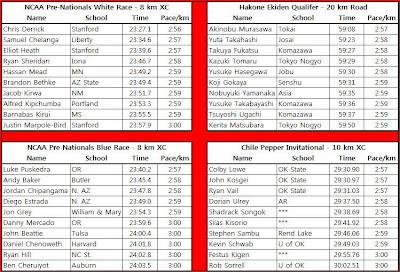 While the races in the U.S.A. were cross-country and thus suffered a disadvantage in terms of pace relative to a road race, the distance in the Hakone Qualifier was twice to 2.5 times as long with a hilly, twisting second half. The number of runners breaking 3:00/km pace in the American races ranged from five to nine, including Kenyan ringers in all three races. All ten runners in the top ten broke 3:00 pace in the Hakone Qualifier, and all ten were Japanese. Most notably, Tokai University freshman winner Akinobu Murasawa's pace over 20 km would have been good enough to win the NCAA Pre-National Blue Race and Chile Pepper Invitational outright and place 2nd in the Pre-National White Race. His time for his final 8 km, 23:26, would have taken the winner of the White Race, Stanford's Chris Derrick, by one second. All of this as a freshman in Murasawa's first-ever race longer than 10 km.

Turning to the team results, the second table shows the average pace per km of the top five men for the top ten teams in each of the four races. Teams are listed by time/pace rather than official place to negate differences in scoring. Click for full-sized version. 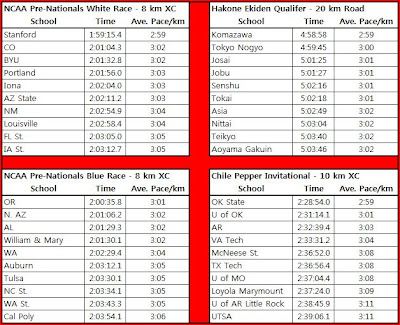 As mentioned above, the Hakone Ekiden Qualifier did not include the eight top-ranked schools in the Kanto region as they are already seeded for the Hakone Ekiden. Winners Komazawa University tied the winners of the NCAA Pre-National White Race, Stanford University, and Chile Pepper Invitational, Oklahoma State University, at 2:59/km. Pre-National Blue Race winners Oregon averaged only 3:01/km. While all the top ten teams in the Hakone Ekiden Qualifier averaged 3:02/km or better, a total of only nine teams between the three American races managed 3:02. Beyond the differences in terrain and distance mentioned above, it is also worth noting that while the American teams field seven runners with five scorers, the Japanese teams field squads of twelve with the top ten scoring in the team results.

TokyoRacer said…
I've been telling people for a while how incredible Japanese collegiate runners are, and it's nice to have solid proof. Those results are amazing. I don't care if the x-country courses are softer, 20k is a hell of a lot further than 8/10k!
October 20, 2009 at 10:40 AM

David said…
You can't comepare these time even if the distance is further. I've run Half Marathon's on the road that were at the same pace as many of my Cross Country races...

Taken from letsrun "For comparison, look at head to head. World XC championships, German and Derrick beat the top Japanese finisher from the 20k, Akinobu Murasaw, that day. Derrick beat him by 26 seconds, German by more. Puskedra, who had a notably bad day, was 7 seconds back."
October 20, 2009 at 12:52 PM

Brett Larner said…
Wow, that's pretty impressive. Congratulations. I can't say I've ever pulled it off or that I know anyone else who has.

Yes, you're right, your university guys German and Derrick beat high school student Murasawa at World XC. You'd have to admit, then, that Murasawa seems to have made an excellent transition to university running with this performance.
October 20, 2009 at 1:52 PM