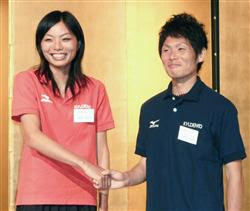 Team Kyudenko held a press conference at a Fukuoka hotel on July 30 to send off its two representatives on the Berlin World Championships team, men's marathoner Kazuhiro Maeda and women's long jumper Sachiko Masumi. Over 300 people gathered to see the pair. "You'll have to excuse me if I'm a little tense," laughed Maeda nervously.

"I'm hungry for a medal, and that's how I'm going to run," Maeda said of his target for the race. Having competed in the 10000 m at the 2007 Osaka World Championships, Berlin will be Maeda's second time on the national team. For Masumi it will be her first time. Having won June's National Championships with a PB jump, she approaches the World Championships with newfound confidence. "My goal is to make the final," she said.