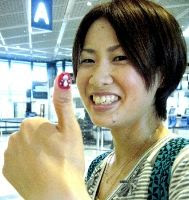 World Championships women's marathoner Yuri Kano (30, Second Wind AC) left from Tokyo's Narita Airport on July 10 for a high-altitude training camp in Albuquerque, New Mexico. Kano said she is in good spirits, and as a good luck charm she had her left thumbnail embossed with a panda. The background color of the design is a hot pink which reminds her of the color of sekihan, a dish Kano eats before each race.

"It's almost time!" Kano said, showing plenty of excitement toward her first time on the World Championships' big stage. However, she admitted that after several months of feeling off her best she went to a hospital on July 7 to have blood tests performed. Kano currently plans to remain in the United States until August 18, when she will travel straight to Germany for the World Championships.