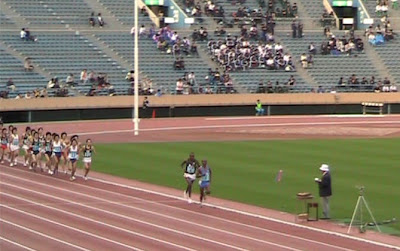 On May 18 at Tokyo`s National Stadium, Yamanashi Gakuin University senior Mekubo Mogusu ran a sensational 25 second PB to win the Kanto University Track and Field Championships men`s 10000 m in a meet-record time of 27:27.64. Mogusu`s time cleared the Olympic A-standard by a wide margin and established him as the 3rd-fastest man in the world so far this year behind fellow Japan-based Kenyans Josephat Muchiri Ndambiri and Gideon Ngatuny.

After a fast first lap Mogusu took the lead just before the 400 m point, followed only by Nihon University sophomore Daniel Gitau. Despite having a PB of 27:44.73 compared to Mogusu`s 27:52.79, Gitau remained in the trailing position for almost the entire race. The large field of top Japanese university runners made no attempt to follow. Juntendo University`s Hiroyuki Ono, famous for collapsing during this year`s Hakone Ekiden, took turns leading the pack with Komazawa University ace Tsuyoshi Ugata and Toyo University`s star recruit, first-year Ryuji Kashiwabara. Mogusu and Gitau lapped the first of the Japanese runners after less than 5 km and quickly reeled in the rest of the field. Gitau made a brief move to take the lead during the 7th kilometer, but Mogusu refused to relinquish his position.

When the two Kenyans overtook the large chase pack the Japanese runners quickly split into two parts, one group of seven which tried to match Mogusu`s pace and another which simply solidered on. Mogusu responded by accelerating, dropping all pursuers including Gitau. As with almost all his performances in Japan, including three sub-1 hour half marathons last year, Mogusu ran the rest of the race alone, apart from occasional company provided by runners being lapped for the second time who tried to go with him. The outcome was never in doubt. Gitau, while far off his PB, also managed to squeeze under the 28 minute mark, finishing in 27:59.05. 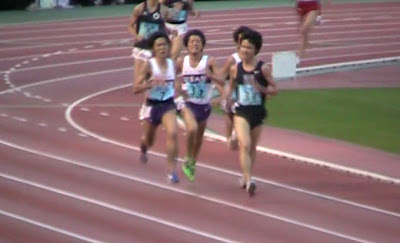 Further back, the race for 3rd intensified as Ono, Ugachi and Kashiwabara were passed by Ugachi`s Komazawa teammates Takuya Fukazu and Sota Hoshi. Kashiwabara, one of the top high school runners in Japan last year, showed that he will be one of the major new faces on the university scene this year by coming back in the last 200 m to beat out his more experienced rivals.

The Kanto University Track and Field Championships continue next weekend. Mogusu is expected to defend his title in the half marathon, which he won last year in course-record time. Also click here for footage of the decathlon 1500 m Group A and Group B races.

February 19, 2021
After experiencing mild pain in the outer ankle of his left foot and being diagnosed with peroneal tendonitis, Tokyo Olympics men's marathon trials winner Shogo Nakamura  (Fujitsu) has made the decision to withdraw from the Feb. 28 Lake Biwa Mainichi Marathon . Nakamura will take a few days off to rest and plans to resume light jogging next week. However, in combination with not meeting his performance goals at an intensive training camp last month, he has decided to err on the side of caution and withdraw. Comments from Nakamura: Lake Biwa was going to be my first race since the New Year Ekiden and my first marathon in a long time, so I'd been looking forward to it. The pain has already faded and doesn't look like it will get in the way of training, but after looking carefully at the situation we decided not to risk more serious injury and to withdraw in favor of being ready for the Tokyo Olympics.  I apologize to everyone who had been expecting to see me run. My first pri
1 comment
Read more

February 09, 2021
As the only game in town for its final running before being swallowed up by the Osaka Marathon 's platinum ambitions, the Feb. 28 Lake Biwa Mainichi Marathon has put together the best field in its history. Times in the last three years don't mean what they used to, but even so Lake Biwa has 2 men sub-2:07, 7 sub-2:08, 13 sub-2:09, 25 sub-2:10, 40 sub-2:11 and 53 sub-2:12, all Japanese but one, Japan-based Kenyan Simon Kariuki  (Togami Denki).  Among them are 2:06 men Ryu Takaku  (Yakult) and Hiroto Inoue  (Mitsubishi Juko), half marathon national record holder Yusuke Ogura  (Yakult), 2019 Fukuoka winner Taku Fujimoto  (Toyota), Tokyo Olympics marathon trials winner Shogo Nakamura  (Fujitsu), 100 km world record holder Nao Kazami (Aisan Kogyo) and many, many more. And there are at least another 7 men with half marathon bests under 62 minutes making debuts or trying to finish a marathon for the first time, notably university ekiden star Shunya Kikuchi (Josai Univ.) and 2017 Wo
3 comments
Read more

Locals Reflect on the End of the Lake Biwa Mainichi Marathon

February 25, 2021
For half a century, the Lake Biwa Mainichi Marathon has been held along the shores of Lake Biwa in Otsu, Shiga. Locals have long given it their full support, turning out as volunteers and to cheer. We talked to them about their memories of the historic race ahead of its final running before moving back to its original home in Osaka. Kikuji Kawamura , 85, a former Otsu municipal employee who has been a part of the race's operational team for decades, is known locally as a living encyclopedia of every aspect of the Lake Biwa Mainichi Marathon. In 1965, the year after the Tokyo Olympics, a friend asked him to help accurately measure the course's 42.195 km distance. The winner that year for the second time was two-time Olympic marathon gold medalist and famed barefoot runner Abebe Bikila of Ethiopia. Kawamura has vivid recollections of talking to Bikila there. "Before the race Abebe was warming up in the stadium and I noticed how skinny his legs were," Kawamura says. &q
Post a Comment
Read more