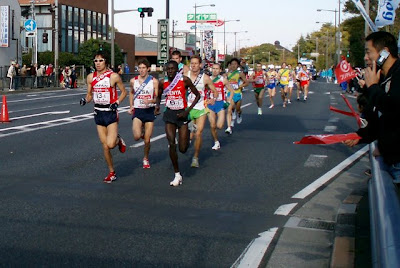 Ed Moran (USA) took the lead from the start in Chiba Prefectural Sogo Stadium, followed closely by Japanese university star runner Yuichiro Ueno. After just a few hundred meters Moses Masai (Kenya) moved up to the lead, opening a slight gap on the pack with only Ueno and Moran following. Ueno moved next to Masai at the exit from the stadium and the two continued to duel for the next 2 km, with Moran and Sergey Ivanov (Russia) just steps behind. Masai made his move at the 3 km point, dropping Ueno and steadily pulling away. Moran likewise dropped Ivanov and ran with Ueno, attacking several times in the final km but fading in the home stretch. Ueno reported being very happy to be within 10 seconds of his Kenyan rival. He also indicated that after his graduation from Chuo University next spring he will join the S&B jitsugyodan team which includes marathon great Toshihiko Seko on its coaching staff. 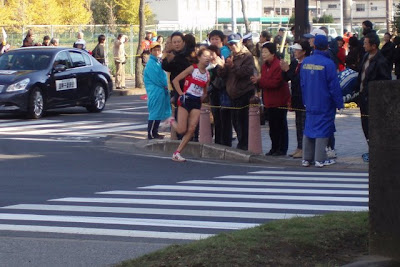 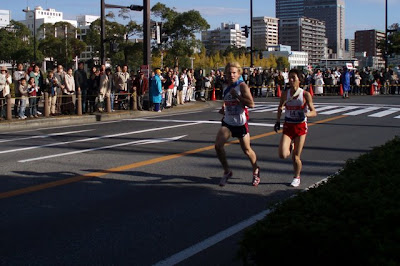 With only a 3-second lead, Barnaba Sigei (Kenya) went out hard, immediately widening his lead over Kenji Noguchi (Japan). Evgeny Rybakov came from behind to catch Noguchi after 2.5 km and the two continued together for more than 5 km. Scott Bauhs (USA) put on a fantastic performance, making up a 41-second deficit to catch Noguchi and Rybakov at the 7.75 km point. Rybakov accelerated to stay with Bauhs but Noguchi could not match Bauhs` speed and dropped back. Rybakov outkicked Bauhs in the final stretch but the American had the fastest time on the stage, beating Sigei`s time by 1 second. Noguchi, who ran a 1/2 marathon PB recently at the World Road Running Championships in Udine, Italy, said afterwards that the wind was a major factor in his sub-par performance.
1. Barnaba Sigei (Kenya) - 28:32 / 57:32
2. Evgeny Rybakov (Russia) - 29:00 / 58:13
3. Scott Bauhs (USA) - 28:31 (stage best) / 58:15
Fourth Stage - Women, 5 km 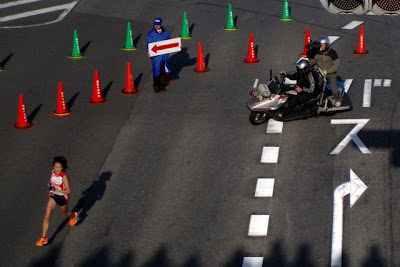 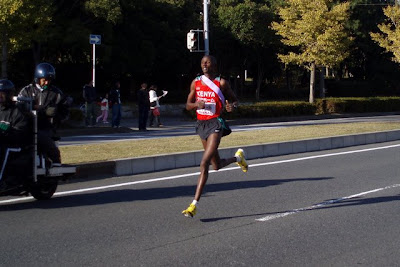 Despite his 36-second lead at the start of the fifth stage, Joseph Birech (Kenya) was rapidly hunted down by the other star university runner on the Japanese team, Kensuke Takezawa of Waseda University. Takezawa was impassive as he steadily gained on Birech but was unable to completely close the gap, finishing the stage 4 seconds behind the Kenyan and picking up the stage best performance. Ryan Sheehan (USA) quickly caught up to Anatoly Rybakov (Russia), twin brother of third stage runner Evgeny Rybakov. In this case it was the American who outkicked the Russian runner to move the USA team into third place. 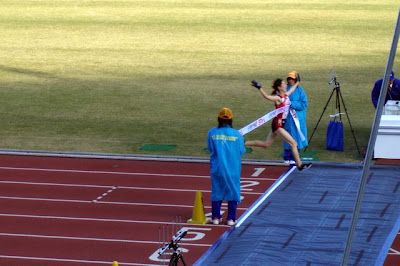 Japanese anchor and ekiden specialist Yukiko Akaba, who recently broke a long-standing stage record held by Naoko Takahashi in a separate ekiden, immediately made up the distance between herself and Kenyan anchor Catherine Ndereba, passing the legendary marathoner after only 800 m. Ndereba uncharacteristically took off her sunglasses just before Akaba`s arrival and was unable to respond in any way as Akaba went by. Akaba continued strongly to the finish, while Ndereba visibly struggled on to the end, finishing almost 400 m behind. Afterwards Ndereba happily played with Akaba`s young baby. Lilia Shobukhova, holder of the fastest 5000 m PB in the anchor field, passed Stephanie Rothstein (USA) to bring the Russian team home in third place. Further back in the pack, Sarah Salmon (Australia) ran a rousing final lap to outkick Chika Horie of the host Chiba Prefectural team. Also notable as an anchor was Romanian Adriana Pirtea, infamous for her recent loss in Chicago while prematurely celebrating victory.
1. Yukiko Akaba (Japan) - 22:39 (stage best) / 2:05:56
2. Catherine Ndereba (Kenya) - 23:53 / 2:07:06
3. Lilia Shobukhova (Russia) - 23:15 / 2:08:00
Final Results
1. Japan - 2:05:56
2. Kenya - 2:07:06
3. Russia - 2:08:00
4. USA - 2:09:05
5. Japan University All-Stars - 2:09:22
6. Great Britain - 2:10:11
7. Australia - 2:11:56
8. Chiba Prefecture - 2:11:57
9. Romania - 2:12:17
10. China - 2:13:59
11. Belarus - 2:14:32
12. Poland - 2:15:10
13. Sweden - 2:17:14
14. Italy - 2:17:30
15. Korea - 2:23:26
The new mixed-team format of the International Chiba Ekiden seemed popular with both spectators and runners and bodes well for its future. At the same time this ekiden`s health seems to be in doubt. Even with the size of the event cut in half, only Japan fielded an A-class team despite Kenya having aces such as Martin Mathathi, Mekubo Mogusu and Ngatuny Gideon, all of whom ran Chiba last year, residing in Japan. It would be a shame to see this event continue to dwindle in significance or disappear. Hopefully the new format will bring the International Chiba Ekiden back to the level seen in the last few years.
Postscript: 1 and 1/2 hours after the ekiden, members of the Romanian and Great Britain teams were spotted in the Nike and Adidas shops at a nearby outlet mall stocking up on bargains before heading home. 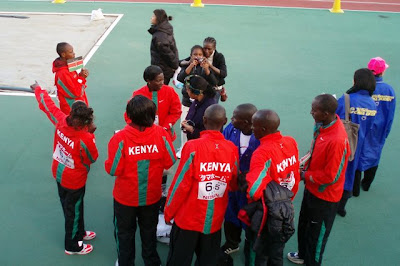 Billy Jack said…
Hey, thanks for this!