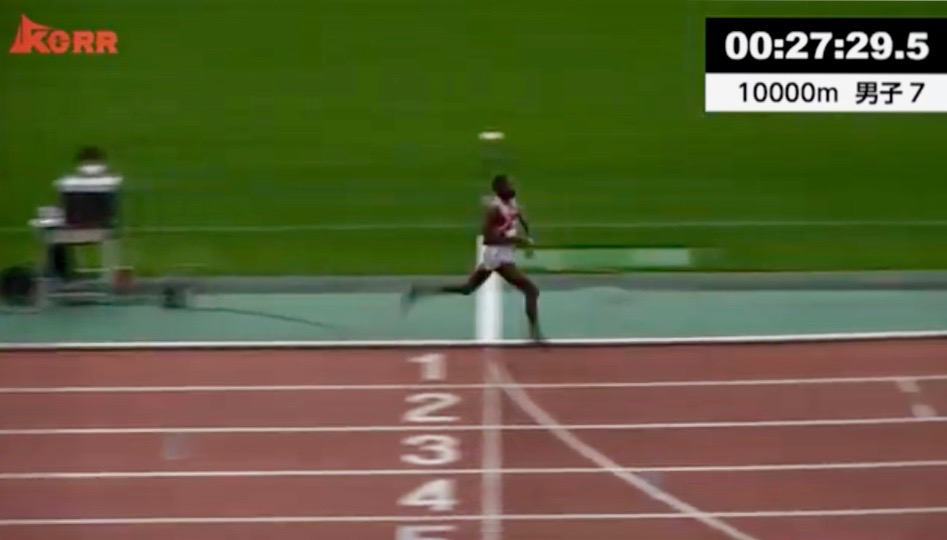 As everyone tunes up for the Mt. Fuji Women's Ekiden, New Yeark Ekiden and Hakone Ekiden, Saturday's Hachioji Long Distance meet was the main event. But it wasn't the biggest meet of the long weekend, and it didn't produce the fastest men's 10000 m time.
Both of those claims went to Monday's Kanto Region University Time Trials meet at Sagamihara Gion Stadium in rural Kanagawa. With ten heats of men's 10000 m and one women's 10000 m on the program, the seventh heat saw Musashino University first-year Charles Kamau Wanjiku improbably solo the second-fastest time ever by a student at a Japanese university, 27:30.09. Wanjiku's time put him 5 seconds ahead of Hachioji fast heat winner Justus Soget (Honda) and almost two laps ahead of runner-up Yuichiro Ono (Teikyo Univ.).
Heat 9 was supposed to have been the main event at the Kanto meet, and although it lost a bit of flair to Wanjiku's incredible run, fourth-year Gaku Hoshi (Teikyo Univ.) ran a solid PB of 28:20.63 to lead the top three in his heat under 28:30, including Komazawa University first-year Mebuki Suzuki, 2nd in 28:23.87. The top 18 in Hoshi's heat were all under 29 minutes, with Wanjiku the only other runner in the heat to pull it off. Women's results were relatively low-key, with fourth-year Kyoka Kudo (Nittai Univ.) taking the top spot in 34:12.45.
Kanto wasn't the only meet other than Hachioji to unexpectedly see a time under 28 minutes. At Saturday's Heisei Kokusai University Time Trials meet in Saitama, Hakone Ekiden Third Stage course record annihilator Vincent Yegon (Tokyo Kokusai Univ.) took 9 seconds off his PB with a solo 27:38.48 to win by nearly a  minute over high schooler Patrick Kinyanjui (Sapporo Yamanote H.S.), 2nd in 28:32.41. It was a return to form for Yegon, who has mostly struggled since Hakone last January, and increases his chances of being picked by his coach for TKU's Hakone lineup this time around. Takashi Ichida and Shuho Dairokuno of New Year Ekiden champ Asahi Kasei went 1-2 in the fastest 5000 m heat in 14:02.55 and 14:05.59.
Across Saitama at the Waseda University Time Trials meet on Saturday, Waseda second-yeat Ryuto Igawa ran a 10000 m PB of 28:12.13 to lead the top four under 28:20 and the top 16 under 29 minutes. The top three in the B-heat were also under 29, with fourth-year Eiki Noguchi (Toyo Univ.) leading the way in 28:56.48.
Down south in Hiroshima, Dan Kiplangat (JFE Steel) took the top spot in the Chugoku Corporate Time Trials 10000 m fast year in 28:32.95. The top 14 all followed Kiplangat under 29 minutes, with B-heat top two Nagisa Moriso (Chugoku Denryoku) and Wesley Kimutai (Chugoku Denryoku) doing the same in 28:58.93 and 28:59.03.
Back up in Kanto, the day before the Kanto Time Trials meet the long distance segment of the Kanto Region University Track and Field Championships, rescheduled from May, took place at same venue as the time trial meet the next day. Usually the highest-level collegiate men's distance track of the year, the rescheduled date up against Hachioji and the Kanto Time Trials meant it was a fraction of its usual self. Second-year Charles Ndungu (Nihon Univ.) won the men's 10000 m in 29:10.73, with second-year Kei Takase (Senshu Univ.) running 14:17.84 to win the men's 5000 m. Despite fewer options women's results were on the same kind of level, fourth-year Sae Hanada (Juntendo Univ.) taking the 5000 m title in 16:28.36 and second-year Satsuki Imai (Daito Bunka Univ.) the 10000 m in 34:59.12.
© 2020 Brett Larner, all rights reserved