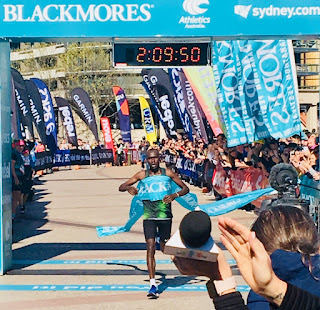 Despite warm and windy conditions the Blackmores Sydney Marathon saw new course records in both its men's and women's races. Felix Kiprotich (Kenya) led the way in the men's race with the first-ever sub-2:10 clocking on Sydney's challengingly hilly and twisting course, breaking away from a group including Michael Kunyuga (Kenya) and Satoru Sasaki (Asahi Kasei) for the win in 2:09:49.

The top three all broke the course record. Sasaki, a Rio Olympian in the marathon who failed to qualify for today's MGC Race 2020 Olympic trials, could take extra satisfaction from having been 26 seconds faster than MGC winner Shogo Nakamura (Fujitsu) on a far tougher course. "I was aiming to win," Sasaki told JRN post-race, "but the course was really twisty and it was hard to run. It would have been nice to be a bit faster, but given my current situation and the problems I've had since Lake Biwa last year I think this put me back on my feet and will help me in my next race. Thanks for cheering for me. It was fun." 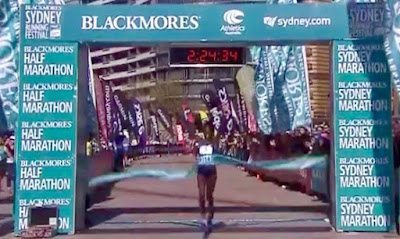 In the women's race a lead quartet of Africans took it out on track to go five minutes under the course record, almost fast enough to challenge Naoko Takahashi's 2:23:14 Australian all-comers record from the 2000 Sydney Marathon. The pace burned the group down, leaving only Kenyan Stellah Barsosio out front with a male pacer. Barsosio slowed slightly on the infinite twists and turns of the course's last 10 km but was still strong enough to take almost four minute off the course record in 2:24:33. Barsosio's time was so good that runner-up Josephine Chepkoech (Kenya) was almost two minutes under the course record despite being over two minutes behind. Ethiopian-born 3rd-placer Tejitu Chalshissa (Bahrain) just missed the record with a 2:28:22.

Three weeks after likewise just missing the course record at the New Caledonia Marathon, amateur runner Haruka Yamaguchi (AC Kita) was in Sydney in pursuit of her first sub-2:30 clocking with support from JRN. Moving up from 7th to 5th and spending most of the race there on her own, Yamaguchi went through halfway in 1:13:52. Over the second half she moved up to 4th, but the endless sharp turns in the last 10 km wore her down and she faded to a 2:33:09. That was still a PB by over 30 seconds, but it left Yamaguchi disappointed. "I made it to the end safely" she said post-race. "It was a PB but not the kind of time I was shooting for. I have to try again."