Sado Over Ohara at Osaka Women's Marathon, Fukushi DNF After Bad Fall, Iwade and Tanihara Take the Half

Stellar pacing right on the A-group target of 17:00 per 5 km quickly shook the pack down to the main contenders, Ethiopians Sado, Abebech Afework and Sutume Asefa Kebede, Kenyans Bornes Chepkirui and Eunice Jeptoo and Japan's Rei Ohara (Tenmaya), Kayoko Fukushi (Wacoal), and Natsuki Omori (Daihatsu). Ohara had already qualified for September's MGC Race 2020 Olympic marathon trials, but for Fukushi, running her first marathon since the Rio Olympics, and the debuting Omori, they needed to either clear 2:24 or be in the first three Japanese women after Ohara and under 2:28.

Just past 12 km disaster struck Fukushi. Tripping in the middle of the pack and falling, she tore both knees and hands before hitting her head on the pavement. Fukushi bounced up and quickly regained contact with the pack, but blood trickled down from a gash on the very right of her forehead and flowed from both knees. It didn't seem to slow her down, not yet, but her coach was worried enough to call out to her after the next water station to ask if she was OK.

Jeptoo was the first casualty from the lead pack, losing touch near 18 km. Afewerk was next, with Omori dropping off after the 20 km drink table. Asefa soon followed, ultimately the only one of the Africans to drop out of the race. Coming up to 25 km Fukushi began to fade, leaving only Sado, Ohara and Chepkirui when the final pacer stepped off at 30 km.

Organizers had put a 500,000 yen bonus, about $4500 USD at current exchange rates, up for the runner in the top 8 who clocked the fastest split from 30 to 35 km, double if they beat last year's winner Mizuki Matsuda's 16:19. But despite a short-lived surge from Ohara it didn't seem to motivate them, all three clocking their slowest split yet in the race, 17:32-33, with Chepkirui scoring the bonus.

At 35 km Ohara surged again, and this time it was enough to snap Chepkirui. Sado tailed her for 2.5 km before going to the front for the first time, never really surging but just gradually edging away. And that was it, really. Ohara rallied in the last kilometer, but with Sado having opened a gap of about 10 seconds she was too far away. Sado won in 2:25:39, Ohara next in 2:25:46 and Chepkirui rounding out the top 3 in 2:26:01.

Behind Ohara, the next three Japanese women could qualify for the trials if under 2:28 with the three after them also having a shot if under 2:27. Madoka Nakano (Noritz) led a pack of four from the B-group in pursuit of Omori, all on track to go just under 2:27 at 30 km. Just past that they suddenly overtook Fukushi, who had begun to repeatedly stop, rub her legs and bend her knees, which immediately started to bleed again. Nakano broke away from them all and entered the stadium in 4th, taking 4 minutes off her PB to clear the trials qualification standard in 2:27:39, only the ninth woman to qualify.

Also on PB pace, Yukari Abe (Shimamura) bore down on the finish line in 5th with the clock ticking down. Agonizingly, she cross the line in 2:28:02, just missing her shot at making the Olympic team by seconds. Just behind her, Hanae Tanaka (Shiseido) also missed out, needing a 2:28:20 to qualify after having run faster early in the qualification window but coming up just short in 2:28:42.

After getting run down by Nakano's group Fukushi alternately walked, ran, stopped, and stretched, slogging her way along and talking to spectators until her coach stopped her at 35 km. Post-race she was taken to the hospital for examination and issued a statement saying, "When I fell I tried to protect my legs, but because of that I hit my head on the road. I felt OK until 20 km, but after that I started getting dizzy and I thought, 'This is bad.'" If the damage isn't serious, dropping out gave Fukushi the chance to try to regroup and try one more time to qualify for the trials in Nagoya in March. 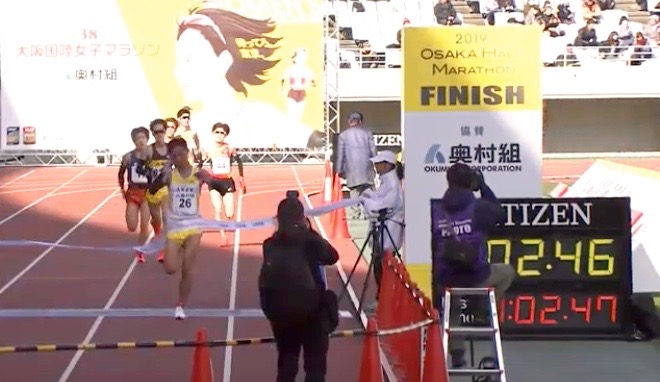 The accompanying Osaka Half Marathon has grown to be one of the better races on the domestic winter calendar, with the top ten men all clearing 63 minutes last year. This year it nearly happened again, with local policeman Madoka Tanihara (Osaka Police) outrunning his corporate league and university competition to lead the top nine under 63 for the win in 1:02:48. Tanimura made a bold move from nearly 2 km to open a big lead, but although Shinichiro Nakamura (Kyudenko) and others bore down on him on the track at the finish his margin of victory was safe. Fellow Osaka police officer Yuto Fujiyama took 6th in 1:02:54. 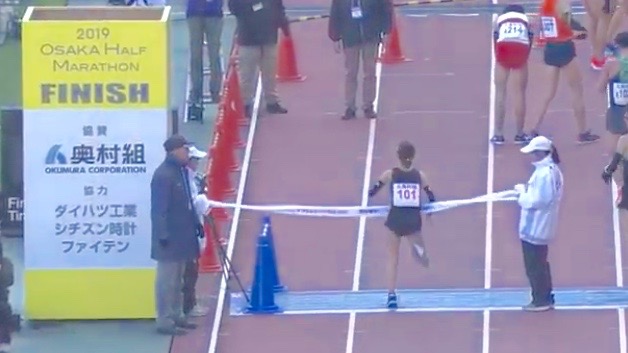 In the women's half, independent Reia Iwade (Under Armor) ran the entire way paced by a male training partner, finishing one second off her PB in 1:09:46. For whatever reason it's become rare to see Japanese women break 70 anywhere other than December's Sanyo Ladies Half, so Iwade getting it done at the beginning of the year is a welcome sight. For much of the race she had competition from Rino Goshima (Chuo University), but Goshima was unable to stay with the pace and fell to 3rd in 1:11:17, run down by Kotomi Tsubokura (Wacoal), runner-up at last weekend's Okukuma Half and 2nd again today in 1:11:08.