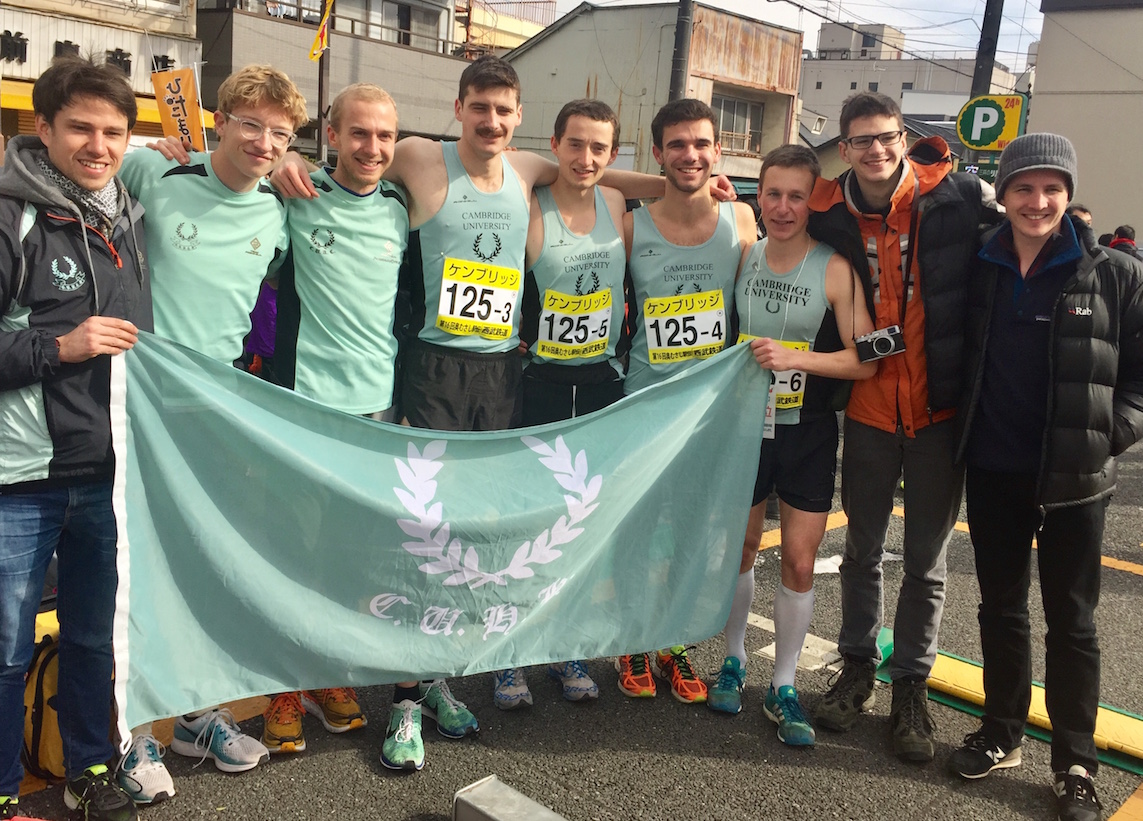 A team of recent graduates of Cambridge University made the trip to the mountains of southwestern Saitama to race the 64th running of the Okumusashi Ekiden in colder than usual weather on Jan. 28. After hearing about the top-level Izumo Ekiden from Harvard and Yale athletes who had run as part of Izumo's Ivy League Select Team, Cambridge runners Josh Carr, Matt Leach and Alex Short wanted to experience a Japanese ekiden themselves. Pulling together a team of six runners and three alternates, they settled on Okumusashi as the best option in competitive level and timing. 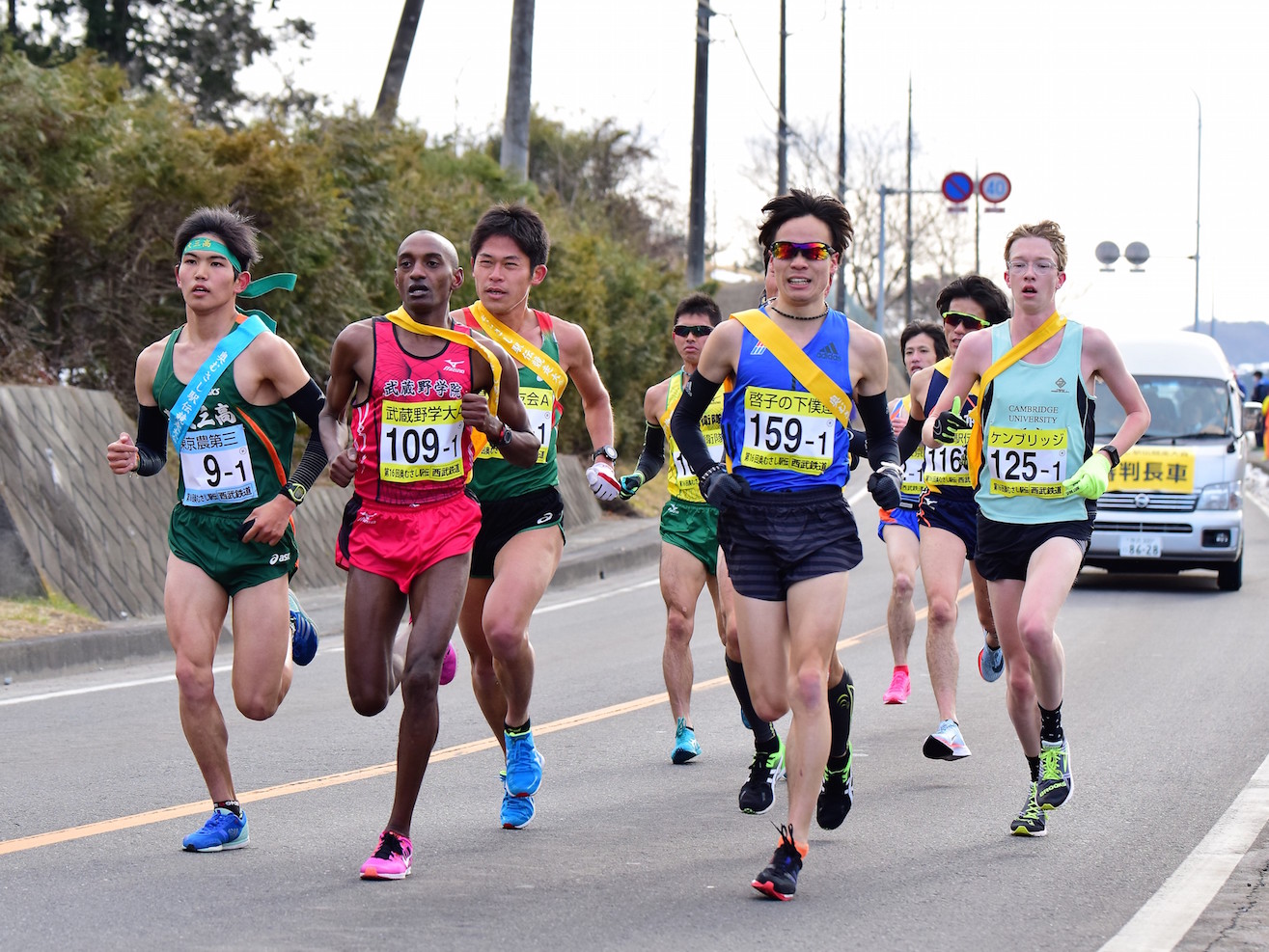 With a 28:45.48 best for 10000 m from Stanford last year Leach led off on the 9.9 km First Stage, facing an unusually deep field including 2018 National Men's Ekiden champion Saitama Prefecture's lead runner Ryu Hashimoto (Tokyo Nogyo Daisan H.S.),  28:17.11 man Yuki Muta and London World Championships marathon 9th placer Yuki Kawauchi. Kenyan Titus Wambua (Musashino Univ.) led in the early going before a pack of six including Muta, Kawauchi and Leach left him behind. With 1 km to go to the exchange Yasumasa Oneyama (Tokyo Police Dept) surged and dropped everyone but Muta and Hashimoto, a stage winner at the National Men's Ekiden three years ago while in junior high. Leach was 4th across the line at the exchange zone, 9 seconds behind Oneyama and 4 seconds up on Kawauchi.


With last year's runners-up the Tokyo Police Department ahead Cambridge's second man Lewis Lloyd moved up to 2nd, the team's best position of the day, narrowing the gap to 6 seconds. "I think I ran the first part a little too conservatively," Lloyd told JRN post-race. "If I'd gone hard early I could have caught up to the Police runner [Kinya Hashira] and things might have been somewhat different."

On the Third Stage the Police's lead grew rapidly despite other teams moving up through the field behind them. Cambridge fell back to 7th overall and 4th in the open men's division as its third runner Mark Nelson was only 26th on his stage. Fourth runner Richard Ollington overtook one open division team to move them back into 3rd but couldn't make a dent in the three high school teams ahead. Carr was overtaken by another high school and one open division team, putting Cambridge into 8th overall and 4th in its division at the final exchange. 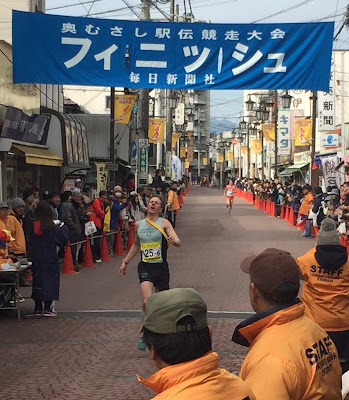 With Short a late scratch due to other commitments replacement anchor James Hoad had a packed road ahead of him for the 9.3 km Sixth Stage. Running down three high school teams including the A and B teams of 2017 National High School Ekiden champion Saku Chosei H.S., Hoad overtook the Takada SDF Base team to advance Cambridge into 3rd just behind Surugadai University. A top 3 finish looked to be in hand, but late in the game Hakone Ekiden team Nittai University's anchor Toshihiko Shiranaga overtook him to knock Cambridge back into 4th.

With an anchor stage win by Norihiko Matsuda the Tokyo Police Department took 1st in 1:57:07 nearly three minutes ahead of runner-up Surugadai. In between, local powerhouse Saitama Sakai H.S. crossed the line second to win the high school division in 1:58:30. Surugadai was next across the line for 2nd in the open division in 1:59:47, Nittai just 3 seconds behind them and Cambridge another 16 seconds back. 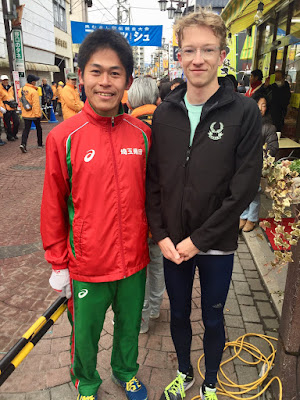 Initially surprised and confused by an overseas team's participation in an historic local event, race organizers, spectators and competitors were quick to embrace the Cambridge team with its strong showing. Kawauchi asked Leach to run the 10 km back to the start point with him as a cooldown. Every member of the team commented post-race that people all along the course had cheered for Cambridge by name, and journalists were quick to track them down in the finish area. Speaking at the award ceremony mayor Masaru Okubo gave the team special recognition during his speech, saying, "It is a great honor and a pleasure to have the Cambridge University alumni team here. With their strong run they have helped form a bond between our town of Hanno and the rest of the world that I hope will live on." 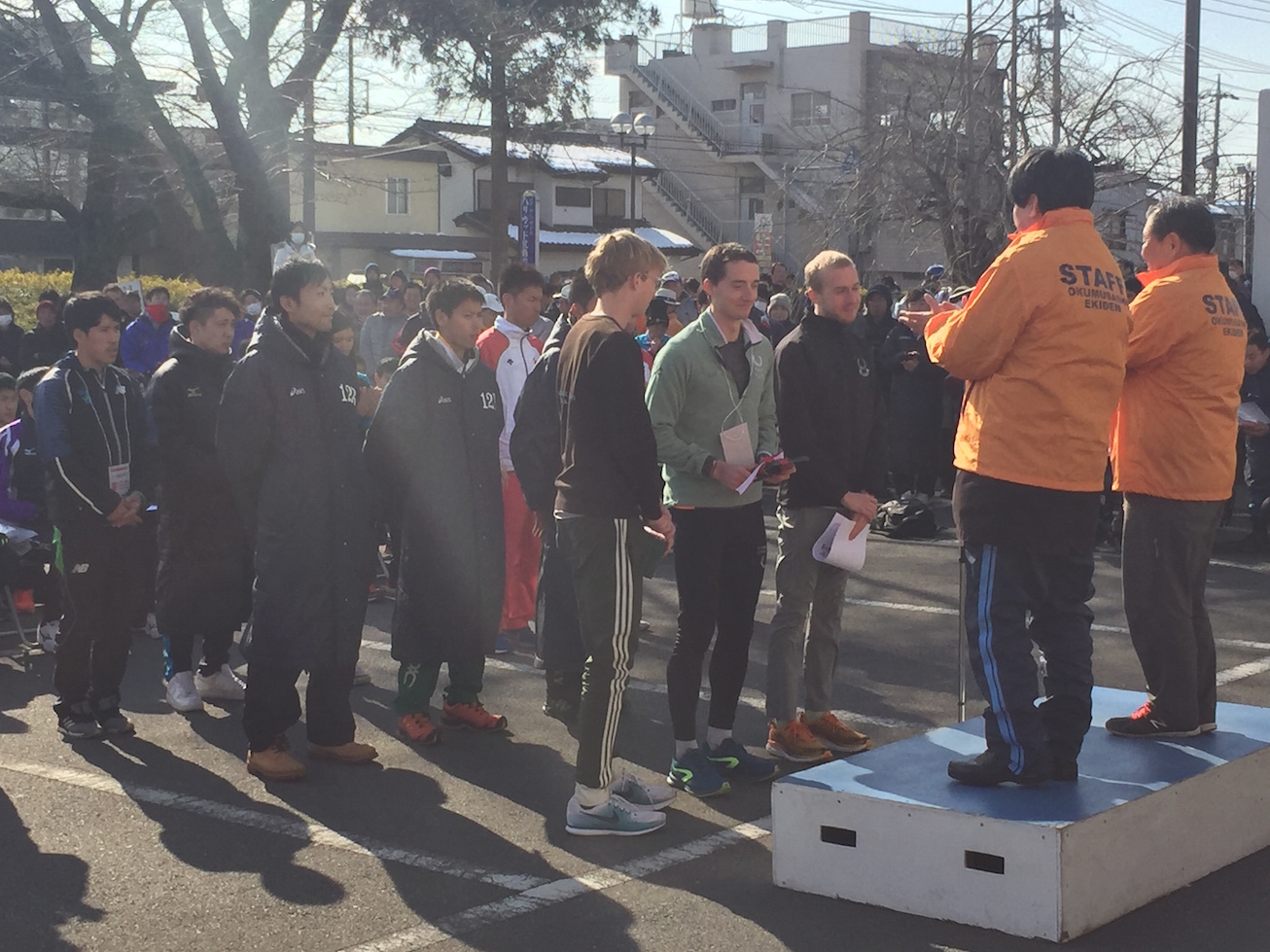