An Honest Look at American Marathoning

February 17, 2016
by Brett Larner
special thanks to Dr. Helmut Winter for assistance with graphics

It's fitting that last weekend's U.S. Olympic Marathon Trials brought American marathoning back to Los Angeles.  In the years leading up to the 1984 Los Angeles Olympics American men and women paved the way as the world's best marathoners, but the L.A. Olympics marked the start of a long decline on both sides that has only recently started to turn around.  With Galen Rupp making a massively anticipated debut and Los Angeles launching its bid for the 2024 Olympics the 2016 L.A. Trials may come to be looked back upon as another turning point.  It's worth taking an honest look at the last 50 years or so of history to understand where that turning point may take American marathoning. 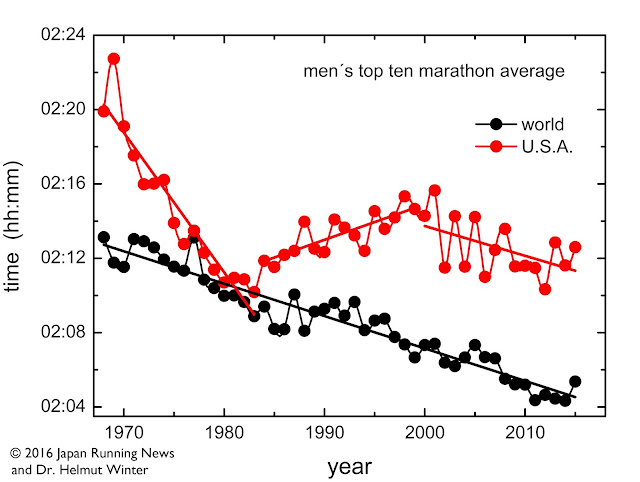 Looking at the average of the ten fastest marathons per year by American men, for the 16 years between the 1968 Mexico City Olympics and the 1984 Los Angeles Olympics American men's marathoning developed at a rate much faster than the world standard.  For a period from the mid-70's through the early 80's, the golden years of Frank Shorter, Bill Rodgers, Dick Beardsley, Alberto Salazar, Greg Meyer and others, the U.S.A. led the world as its dominant men's marathoning power.  1983 marked the height of this power, with four sub-2:10 performances and a top ten average of 2:10:11 that still stands as the best in American history.

The 1984 Los Angeles Olympics, however, seemed to pop the bubble.  For the next 16 years from L.A. to the 2000 Sydney Olympics American marathoning went into a steep decline, not just relative to the world standard but in absolute terms.  In that 16 year period there were only four sub-2:10 marathons run by American men, the same number as in 1983 alone, and the top ten average slowed by more than five minutes.  All the while the world standard continued to improve steadily, leaving the U.S.A. farther and farther behind.

Around the time of Sydney things began to turn around, and in the 16 years since then American marathoning has shown erratic but progressive improvement.  Sub-2:10 marathons became a regular occurrence, with the five run in 2012, including four at the Houston Olympic Trials alone, breaking 1983's record.  2012's top ten average of 2:10:20 came up short of the 1983 record but was still 2nd in American history.  The average level has yet to return to the peak years just before the L.A. Olympics over 30 years ago, but in absolute terms American marathoning has improved over the last 16 years.  At the same time, the rate of improvement during this period almost exactly paralleled the worldwide rate, meaning that overall American men are still treading water relative to the rest of the world.

The question of what happened after the L.A. Olympics raises a lot of possibilities that have been talked about for years: a generational gap, changes in training, priorities in university, a shift in focus to other distances as Kenya and Ethiopia came to the forefront of worldwide marathoning, the support systems in place for athletes trying to compete in an era of faster performances that demand more than in earlier generations, some combination of these and other reasons.  It's an equally good question to ask what brought about the turnaround after Sydney.  Many of the factors above that might have changed post-L.A. swung back around, not least among them the arrival of a new generation including Ryan Hall and Dathan Ritzenhein.  Another factor was significantly higher contributions from naturalized citizens.

Looking at the ten fastest marathon times per year from 1968 to 1983, to the best of my knowledge six of the 160 performances were by naturalized citizens, 3.75% of the total number.  From 1984 to 1999 five of the 160 fastest performances were by naturalized citizens, 3.125%.  From 2000 to 2015 this number jumped to 40 out of 160, a major increase to 25%.  In 2004, six of the ten fastest times including the four fastest were by naturalized citizens, with Eritrean-born Meb Keflezighi winning silver in the Athens Olympics.  Looking at the 2000-2015 numbers adjusted to percentages similar to the two previous 16-year cycles, i.e. only the six fastest of the 40 performances by naturalized citizens, the top ten average still shows moderate improvement, indicating that other factors were involved in the turnaround.  But, in keeping with what makes the United States what it is, a large part of recent American men's gains has come thanks to those born abroad who came to the U.S. to contribute what they have.  Some like Keflezighi came while young, others to run in the NCAA and taking citizenship after graduating, others like national record holder Khalid Khannouchi becoming citizens after having raced professionally for their native countries, but regardless of their reasons in the modern era of marathoning naturalized citizen runners have never played as important a role in the U.S. as in the last 16-year cycle. 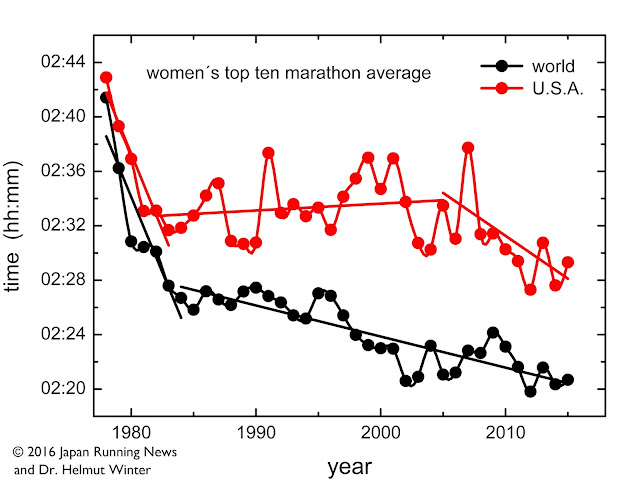 Both in the U.S.A. and worldwide, the 1984 Los Angeles Olympics more or less marked the starting point of modern women's marathoning.  In the years leading up to L.A. women's marathoning worldwide matured rapidly, most of its growth driven by American women who, like the men, led the way in the early 80's.  Joan Benoit Samuelson's gold medal in L.A. resonated around the world, but while women in the rest of the world took it as a starting point for over 30 years of progressive development American women's marathoning came to a standstill after L.A.  With some generational fluctuation along the way, for the 20 years after L.A. the average level among women in the U.S.A. showed no overall improvement, even regressing slightly relative to where it had been at the time of L.A.

There were signs of improvement around the time of the 2000 Sydney Olympics but nothing outside the range of what had come before.  The real turning point came four years later in Athens with Deena Kastor's bronze medal.  The fastest year in U.S. women's history up to that point, 1989, had a top ten average of 2:30:40.  In 2004 this went to 2:30:15 and continued to trend faster with almost every year since then averaging under 2:32:00.  2011 saw the average go under 2:30 for the first time to 2:29:24, and a year later with the 2012 London Olympics it went to 2:27:18.  The average is still well behind the world standard, but the American women's rate of improvement over the last 12 years has been significantly faster than the worldwide rate.

So the question is, with both American men and women going in the right direction, will this year's U.S. Olympic Marathon Trials mark another turning L.A.-based point?  If L.A. does win the 2024 Olympic bid, will American marathoning be ready to represent?  U.S. women are already better than they've ever been and have a solid group of talent at the top instead of just one star runner as in years past.  If the trend continues or accelerates they look set to become a global power for the first time in over 30 years.

For men the challenge is tougher.  Keflezighi pulled off a miracle in L.A. and made the Rio Olympic team at age 40, but none of the other top four at the Houston Trials, Hall, Abdi Abdirahman, and Ritzenhein, all runners who played large roles in the improvements since Sydney, were factors in L.A., Hall retiring, Abdirahman a DNS and Ritzenhein a DNF.  It's clear that another generational change is in progress with under-30 runners who hadn't started marathoning yet four years ago at the Houston Trials taking the other five spots in the top six around Keflezighi.  Winner Rupp definitely looks like he has the ability to go faster than his 2:11:10 debut time in the heat at the L.A. Trials, but as American men enter the next 16-year cycle it will take others stepping up for them to start bringing the U.S. closer to the world standard for the first time since before the 1984 Los Angeles Olympics, to maintain the holding pattern of the last 16 years, or even to stop a swing back in the direction of the 1984-1999 years.