For more than 50 years the United States has led the world as its largest amateur marathon market, more people from around the world finishing marathons in the U.S. than in any other country.  Always a strong home for elite marathoning, the launch of the Tokyo Marathon in 2007 sparked an incredible amateur running boom in Japan that coincided with a worldwide growth in the popularity of marathons.  The Association of Road Racing Statisticians website tracks the number of marathon finishers by country worldwide, listing all marathons with results it can document.  Below are the total number of marathon finishers worldwide, in the U.S.A. and in Japan over the last ten years using the ARRS numbers.  Totals are number of finishers, not number of unique individuals to finish.  Chinese and Korean races are relatively under-documented. 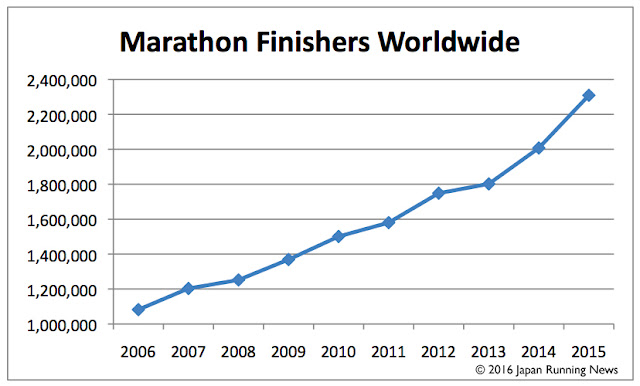 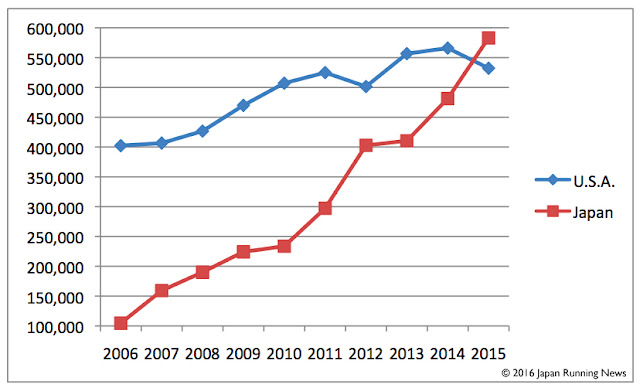 During the ten years from 2006 to 2015 the number of marathon finishers worldwide more than doubled from more than a million to well over two million.  The worldwide market grew at an almost constant rate.

During this time total finisher numbers in all U.S. marathons grew by over 30%, but over the same period of time the United States' worldwide market share fell from nearly 40% to less than 25%.  The divot in 2012 was due to the cancellation of the New York City Marathon, the world's single largest, and the 2013 numbers are likewise missing the significant part of the Boston Marathon field that could not finish after the bombings that year.  Accounting for the missing 2012 New York and 2013 Boston numbers, it becomes evident that participation in U.S. marathons hit a plateau in 2012-2014.  In 2015 marathons of all sizes in the U.S. experienced a small but widespread decline in participation; among the roughly 100 U.S. marathons documented to have had 1000 or more finishers in 2014, over 75% had lower finisher numbers in 2015.  The 25 largest of them totalled 292,491 finishers.

In the same ten years the number of marathon finishers in Japan grew from just over 100,000 to nearly 600,000, its worldwide market share climbing from less than 10% to over 25%.  In 2015 its 25 largest marathons totalled 366,066 finishers.  Even taking into account missing Chinese and Korean totals, Japanese races accounted for more than 40% of the worldwide growth during the last decade.  The slight dent in the graph in 2010 was caused by the cancellation of the Itabashi City Marathon due to bad weather and the postponement of the Shonan International Marathon thanks to that year's Yokohama G8 summit, but growth was so strong that the cancellation of most of Japan's March and April marathons following the 2011 disasters was hardly noticeable in the finisher totals.  Weather-related cancellations and the absence of the bi-annual Chiba Aqualine Marathon also held back the 2013 numbers somewhat.

In 2015 more people finished marathons in Japan than in the United States, the first time since 1961 that any country surpassed the U.S. as the world's largest amateur marathon market.  With U.S. growth having slowed and even showing signs of saturation the rapid rate of growth in the Japanese marathon market means it is likely to continue to occupy that position for at least the next few years, only China, #3 in the world in 2015, in a position to conceivably overtake it. 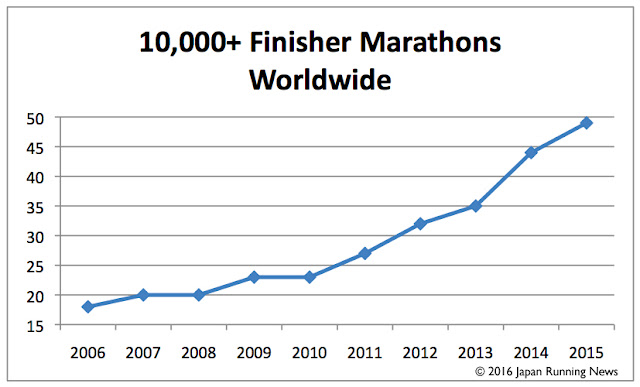 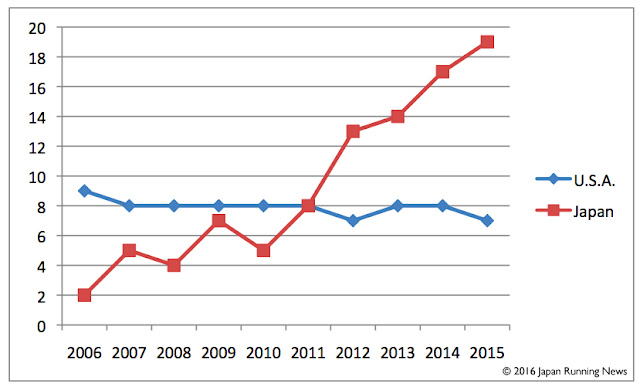 Not just the number of finishers but also the number of major marathons, those with 10,000 finishers or more, has grown rapidly over the same decade from 2006 to 2015, rising from around 20 to nearly 50.  Chinese and Korean marathons are again relatively under-documented.  In 2015 France's Medoc Marathon, the Singapore Marathon, the Philadelphia Marathon in the U.S. and Japan's Fujisan Marathon all dropped from over 10,000 finishers in 2014 to fewer in 2015.  Japan's bi-annual Chiba Aqualine Marathon, with more than 11,000 finishers in 2014, was not held in 2015, its next running set for October this year.  Nevertheless, the number of major marathons worldwide continued to grow with most of the growth taking place in Asia.

In the U.S.A. the number of major marathons has been almost flat over the last ten years, trending slightly downward from nine in 2006 to seven in 2015.  In the same period Japan rose from just a handful of documented races in 2006 to nineteen in 2015 even without Chiba, nearly half the worldwide number and representing roughly 50% of the worldwide growth.  With four more marathons in 2015 with over 9,000 finishers and at least one more big new race, the Kagoshima Marathon, set to kick off this year the number of major Japanese marathons could grow even further.

A large part of the U.S. finisher totals is made up of international marathon tourists, giant races like New York, Boston, Chicago and Honolulu famous as major international draws.  Japanese races have always been limited by a lack of English-language entry or even entry services being able to handle addresses outside Japan.  In recent years some races have started to offer foreign-language entry, and with the Japanese government pushing to increase its inbound foreign tourism beyond 2015's record-setting numbers online entry services are starting to welcome more runners from abroad to what is now the world's largest amateur marathon market.

Samurai Running Japan is a long-standing entry service that focuses on smaller races to help overseas visitors "experience the 'real' Japan."  Along with entry it assists with accommodations and transportation.

Launched in September, 2015, Runnet Japan is an English-language branch of Runnet, Japan's dominant online entry service, catering to the international community.  The number of races offered on Runnet Japan is still limited but constantly expanding.

Other entry services like Sports Entry, TecNet and the new Sportsnavi Do still offer only Japanese-language and domestic address service, but with swelling numbers of international runners at races across Japan they are bound to get in on the action soon.

sanrensho said…
Great job compiling this data. I wonder if there has also been an upswing in outbound participation with Japanese marathoners going abroad.
January 25, 2016 at 4:55 AM

Please note that within 100 miles of where I live in the South East USA, there are 4 marathons with less than 1000 participants. I would imagine there are over 100 marathons in the USA with less than 1000 participants. What I am starting to notice in the U.S. are lots of runners who are not marathoners, these are people who run just one marathon and then revert back to a shorter distances as opposed to individuals where the marathon is their preferred distance and they run lots of them.
January 25, 2016 at 2:09 PM

Brett Larner said…
The numbers above are for all documented marathon finishers, including every known marathon with less than 1000 finishers. The only statistics that don't are for the 100 largest marathons in the U.S. and the 25 largest there and in Japan.

Brett Larner said…
An earlier article on the rise of Japan's major marathons:

"New Generation of Japanese Mass-Participation Marathons Waking Up to Reality"