Aoyama Gakuin University opened the 91st Hakone Ekiden with an incredible team performance, chasing down frontrunning national champion Komazawa University on the mountainous final stage of the day to set a new record of 5:23:58 for the five-stage, 107.5 km net uphill Day One course. 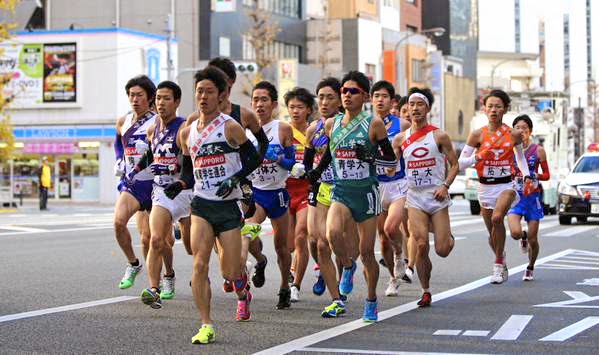 The heavy favorite, Komazawa led off with its two big guns, Shogo Nakamura, sub-62 at the 2014 World Half Marathon Championships, and Kenta Murayama, sub-61 at last year's Marugame Half.  Nakamura struggled in the early part of the second half of the 21.3 km First Stage, losing touch with the small lead group at least twice before making a move.  1:01:36 on the First Stage last year, he pulled away for the stage win in 1:02:00, but just 1 second behind him was Aoyama Gakuin junior Kazuma Kubota followed closely by Ken Yokote of 2014 National University Ekiden runner-up Meiji University, Masaya Taguchi of 2014 Hakone champion and course record holder Toyo University and, slightly further back, Hironori Tsuetaki of the relatively minor Chuo Gakuin University. 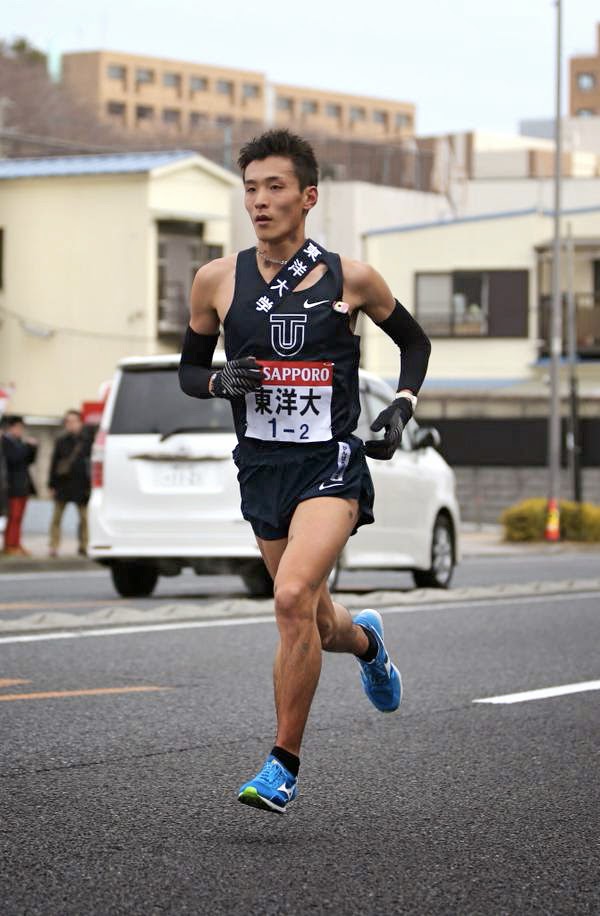 Murayama started smoothly on the 23.2 km Second Stage, strong but under control, but Toyo's Yuma Hattori, the 30 km collegiate record holder at 1:28:52, quickly made up the ground to him.  As the pair sparred for most of the stage Aoyama Gakuin's Tadashi Isshiki and Meiji's Shuho Dairokuno grew closer, while further back last year's Second Stage winner Koki Takada (Waseda Univ.) overtook Chuo Gakuin's Tsuyoshi Ebisawa for 5th and Murayama's twin Kota Murayama (Josai Univ.), starting in 16th, rapidly moved up into the top ten.  In the final kilometers Hattori put in a stage-winning surge that opened a measureable gap on Komazawa's Murayama, but when Isshiki also overtook him Murayama responded with a kick that brought him back to within two seconds of Hattori.

With just a two-second lead Toyo's Kazuki Uemura wasn't much of a match for Komazawa's star second-year Keisuke Nakatani, who quickly went by and began building a lead for the favorites with a 1:02:40 winning time on the 21.4 km Third Stage.  Almost as fast, Meiji's Yuki Arimura ran down both Toyo and Aoyama Gakuin to end the stage in 2nd 18 seconds back.  Aoyama Gakuin's Toshinori Watanabe also overtook Uemura for 3rd another 31 seconds back.

Komazawa first-year Naoki Kudo, a major surprise at November's Ageo City Half Marathon with a 1:02:18 debut for 3rd, ran a stage record 54:31 for the 18.5 km Fourth Stage, seemingly strengthening the team's position.  But behind him Aoyama Gakuin first-year Kazuki Tamura was even better, running 54:28 for another record, 2nd place just ahead of Meiji, and a few precious seconds off Komazawa's lead.

Throughout the Third and Fourth Stages the tension built as Hakone's most critical stage approached.  With 864 m of climb mostly in its middle 13 km, for nearly ten years the outcome of the 23.4 km Fifth Stage has been the determining factor in the overall Hakone win.  Aoyama Gakuin head coach Susumu Hara said pre-race that his planned Fifth Stage man Daichi Kamino was going to run 1:17:30, a mark only Toyo alum Ryuji Kashiwabara had ever bettered with his legendary 1:16:39 course record in 2012.  Last year Komazawa's Fifth man Shota Baba broke 80 minutes, the benchmark for the very top level of Hakone athletes, and despite the weaker than hoped-for runs from Nakamura and Murayama that left him with a lead of only 46 seconds a similar performance from Baba this time would put Komazawa in good position to retake the lead if Kamino lived up to Hara's expectations or to keep it if he failed. 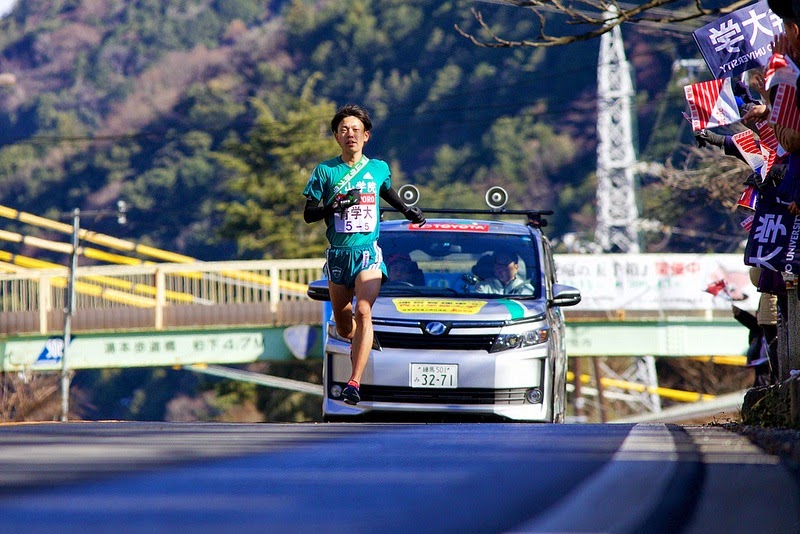 Baba ran well on the flattish first 5 km and looked strong heading into the hills.  But behind him Kamino went out hard from the handoff, reckless in how close to 100% he looked even before the course really began to make its demands.  With every checkpoint he was closer to Baba, and, despite a minor change in the stage length this year due to road construction, closer to Kashiwabara's record pace.  By 10 km he had Baba, who at first sped up to prevent Kamino from passing but soon gave in to his sheer momentum.  Baba gone Kamino kept pushing, face screwed in effort but still light and springy as he reached the peak with 5 km to go.

The Fifth Stage includes over 2 km of steep downhill from the peak to a flatter 2 km stretch to the finish, creating a need for some balance in ability rather than catering only to pure uphill specialists.  Kamino had it.  His lead on Kashiwabara's record pace grew as he flew down the hairpin curves, and still full of energy he turned the last corner to the finish line to break the tape in 1:16:15, eclipsing one of the most respected records in Japanese distance running.  Given the course change his time was almost equal in value to Kashiwabara's 1:16:39 record, and Aoyama Gakuin's time in its first-ever Hakone Day One win, 5:23:58, was well ahead of Toyo's 5:25:38 course record.

Left behind, Baba looked heavy as he hit the downhill, his pace not increasing and showing no reaction as Meiji's Kei Fumimoto went by into 2nd.  Beginning to stagger once he hit the flat, he fell on a slight uphill with 1.2 km to go.  In 2008 the same thing happened at almost the identical place to Juntendo University anchor Hiroyuki Ono, who struggled to his feet repeatedly before his coach and officials pulled him out of the race.  As Baba got back to his feet Komazawa head coach Hiroaki Oyagi called out, "Take it easy, take it easy, it's OK.  Walk if you have to."  Baba began a slow jog forward, face blank as he went down the slope to the final straightaway.  He showed no recognition as Toyo's Shun Gorotani went by into 3rd, and just before the final corner he fell again.  Struggling back up to round the corner with 30 m to go he only went steps before falling again.  It took him longer to get back up, and with 15 m to go he went down again.  A DNF looked like a real possibility, but Baba managed to get back up and take the final few steps to the finish line where Murayama, Nakamura and race emergency staff waited to catch him.  He was later reported to be suffering symptoms of hypothermia.

Just over a minute later Chuo Gakuin's Yuta Oikawa came through in 5th after catching Waseda captain Shuhei Yamamoto.  Tokai University's Shota Miyagami crossed the line next in 7th in 5:33:55, just beating the 10-minute cutoff from Aoyama Gakuin's 5:23:58 winning time.  The remaining 14 teams were all over the 10-minute mark, meaning a complicated Day Two battle for the remaining three seeded spots in the top ten as all 14 will start 10 minutes after Aoyama Gakuin with handicaps added to their running times.  Josai University, Daito Bunka University, Chuo University and Takushoku University are all in range.

Up front, with a 4:59 lead over Meiji, a 6:49 lead over Toyo and a 7:25 lead over Komazawa, Aoyama Gakuin is in a winning position that will be hard for any of those schools to touch on Day Two without one of Aoyama Gakuin's runners getting into the same kind of trouble as Baba.  At the very least it's set to beat its best-ever 5th-place overall finish.  Three of its six sub-29 runners and four of its eight sub-64 half marathoners are still in reserve, giving coach Hara plenty to work with.  But with a team made up largely of third-years he has a relaxed attitude. "There is no pressure at all this time," he told JRN pre-race.  "We can win, but if we don't we still have next year. Maybe there'll be pressure then, but not this time."

Meiji's run was excellent for a team that is always strong on paper but has trouble putting it together in the key ekidens, and while it has run its biggest names it still has four sub-29 men left.  Toyo also has three sub-29 men still left including Hattori's younger brother Hazuma Hattori, a 1:02:31 half marathoner.

Komazawa ran its four biggest names on Day One, and while it has the best people remaining out of all the teams in the top four, the quality still available to the other three teams makes it almost impossible for the four-straight national champion to come back and score its first Hakone win since 2008.  With a ten-man half marathon average of 1:02:29 Komazawa is far and away the strongest in the field, but at this point it's looking like coach Oyagi just couldn't put the pieces together this year.  At Hakone nothing is certain, and that's a big part of what makes it what it is.

Joe said…
This was the best race I've ever watched. Maintaining that level of excitement over 5 hours is unbelievable. I was standing up watching most of it and in tears on multiple occasions. Long live the Hakone Ekiden!
January 5, 2015 at 11:33 PM