A Few Words on Chicago

Chicago comes at a tough time for Japan's corporate leagues, just before the start of the fall ekiden season's regional qualifiers.  Although just about every team has more than enough people to fill their lineups for these relatively minor events, head coaches will usually not let their better athletes do an October marathon, whether because of the limited recovery time in the event that they decide a big gun has to run in a qualifier, or because it would give them the hassle of explaining to the parent corporation why a star is off doing his or her own thing instead of being there for the team.  As a result you typically only see Japanese runners at Chicago when they are looking to drop something big, as with Yukiko Akaba (Team Hokuren) and Yoshinori Oda (Team Toyota) this year, or, like the block of  Japanese men at 2:12~2:13, as part of a corporate federation junket for promising third-tier men to get the experience of running in the second pack of a race well beyond them for the benefit of hypothetical future appearances on Olympic and World Championships and for their numerous support staff to have the chance to comb the streets of foreign cities in search of laundromats. 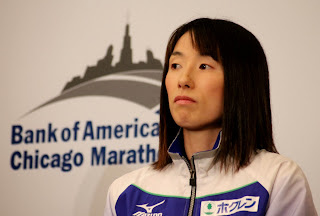 Akaba is the only quality Japanese woman on the line, one of Japan's all-time best on the track and over the half-marathon but so far unable to reach her goals in the marathon. With three 2:24 performances in London capped by a 3rd-place finish this year Akaba comes to Chicago looking to finally get where she envisions herself.  Her 2:27:17 course record win at July's Gold Coast Airport Marathon was originally planned as a training run, then upgraded on arrival when she discovered the unexpected strength of the invited African field.  In late August Akaba told JRN that her Kawauchi-style double, a 2:32:10 for 2nd at the Hokkaido Marathon seven weeks after Gold Coast followed six days later by a narrow loss in 1:10:24 at the Lille Half Marathon in France, was planned to simulate running with tired legs the kind of time she hoped to do over the second half of Chicago. Her racing style at Daegu and London, running a controlled pace and ignoring early moves before turning it on in the second half, served her reasonably well in those races, and if she is actually able to bring a second half time around 1:10:30 she could place very well indeed.

Oda has had a very interesting domestic career, steering clear of the ekiden powerhouse universities but still making the celebrated Hakone Ekiden on the Select Team before going to the Toyota corporate team which he helped lead to the 2011 national title.  His 2:09:03 a few weeks later at the 2011 Tokyo Marathon was the all-time third-fastest Japanese debut, but unfortunately he was almost completely overlooked due to the unlucky role he played in this:

He's had a streak of injuries and never been able to put another good marathon together in the two and a half years since his debut, but a 28:26.04 for 10000 m at the end of June put him back close to peak fitness.  If he carried that on through the summer then Oda may be on track to finally follow up. 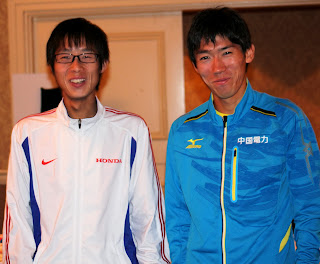 The most interesting Japanese man in Chicago, though, is 25-year-old Hiroaki Sano (Team Honda), a teammate of Moscow World Championships marathoner Masakazu Fujiwara and Berlin Marathon 7th-placer Suehiro Ishikawa. Sano exploded onto the scene in February with a completely unexpected, even by his coaching staff, 2:12:14 win in his debut at the Nobeoka Nishi Nihon Marathon.  Exploded in terms of a 6:31 split for the last 2.195 km, faster than Yuki Kawauchi's stunning finish a week earlier at the Beppu-Oita Mainichi Marathon. There's no telling whether it was a fluke and his other performances don't give much indication that Sano has the potential for major improvement, but there's always the chance something special could happen.  The man he beat in the Nobeoka sprint, Hirokatsu Kurosaki (Team Konica Minolta), is also on the list, but a 1:09:00 clocking two weeks ago at the Hakodate Half Marathon was not encouraging. 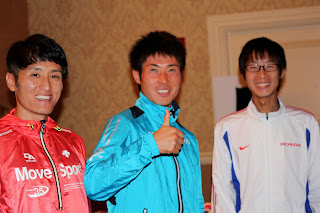 Four other men, Kenji Higashino (Team Asahi Kasei), Yoshiki Otsuka (Team Aichi Seiko), Hiroki Tanaka (Team Chugoku Denryoku) and Norihide Fujimori (Team Chugoku Denryoku) round out the Japanese tour.  Higashino, coached by the great Takeshi Soh, is the cream of the bunch, his 2:12:13 for 3rd in Beppu-Oita this year putting him just one second ahead of Sano's winning time a week later.  A breakthrough to sub-2:10 or even sub-2:12 territory for any of them would be a feather in the cap of a corporate system struggling with modernity.