Yukiko Akaba (Team Hokuren) and Yuki Kawauchi (Saitama Pref. Gov't) lived up to pre-race talk as they won the women's and men's divisions at the 35th running of the Gold Coast Airport Marathon.  In a moderate headwind over the opening 15.5 km that grew in strength as the morning progressed, Akaba ran a characteristically controlled and steady race, ignoring the fast early pace set by Kenyans Alice Ngerechi and Helen Mugo and going out at a steady 2:27 course record pace before picking it up over the second half of the race aided by the growing tailwind.  By 25 km she had overtaken Mugo, Ngerechi's turn coming just minutes later.

Rounding the second turnaround at 36.5 km Akaba suffered in the now-stronger headwind and her pace dropped, but she was never in danger of missing the antique 2:29:29 course record set 20 years ago by Eriko Asai.  Akaba took more than two minutes off that record, setting a new mark of 2:27:17.   "I didn't worry about the Africans when they went out fast," she said post-race.  "I just stuck to plan and ran course record pace hoping that it would be enough for the win."  Akaba's next major race is the Aug. 30 Lille Metropole Half Marathon in Lille, France.

Ngerechi was not far off the old course record, becoming only the third woman in Gold Coast history to break 2:30 as she took 2nd in 2:29:48.  Past Nagano Marathon champion Alevtina Ivanova (Russia) was never in the front of the race but pushed on for a 3rd-place finish in 2:32:01. 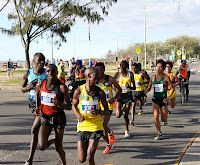 The men's race was a tight pack until 30 km, splitting a slower-than-hoped-for 1:05:00 at halfway.  Ethiopian Girmay Birhanu Gebru made the move at 30 km that got thing moving, surging away and opening an eight-second lead over Kawauchi, the only runner to chase him.  Girmay soon faded, leaving Kawauchi alone in pursuit of the 2:10:01 course record as he turned into the headwind over the final 5.5 km.

Despite a 6:47 split from 40 km to the finish, the fastest in the field, Kawauchi came up just shy of a new record and his goal of a sub-2:10 as he tied the existing course record in 2:10:01.  "One second....." he told JRN post-race.  Adding resolution to pre-race interview comments about his desire to beat Africans he added,  "I'm glad at least that I was able to run down the Ethiopian.  Next year I'll bring Gold Coast its first sub-2:10."  In his 25th marathon and 6th of 2013 Kawauchi had at least one consolation: his 2:10:01 at Gold Coast gives him an average of 2:09:01 for his five fastest marathons, passing London Olympian Arata Fujiwara (Miki House) and the legendary Toshihiko Seko to become the all-time #4 Japanese man.

Taiga Ito (Suzuki Hamamatsu AC) was a surprise 2nd-place in his second time at the Gold Coast Airport Marathon, not far off his best in 2:11:52.  Half marathon specialist Tewelde Hidru (Eritrea) turned out a 2:13:09 best for 3rd, running down Girmay late in the race.

Further back, Singaporean 5000 m and half marathon national record holder Mok Ying Ren fell short of a new national record in the marathon but set a new PB of 2:26:30 to qualify for December's Southeast Asian Games.  59+ world record holder Yoshihisa Hosaka (Natural Foods AC) told JRN pre-race that he was not fully fit and hoped to run around 2:50 but finished in 2:46:17, the second-fastest ever by a 64-year-old.  He plans to make a serious assault on Clive Davies' current record of 2:42:44 at October's Scotiabank Toronto Waterfront Marathon.

In the Asics Half Marathon, 2010 Marugame International Half Marathon winner Nikki Chapple (Australia) had an easy win in 1:11:00, while London Olympian Martin Dent (Australia) held off Shinichi Yamashita (Japan) by one second for the men's win in 1:03:56.  Moscow World Championships team member Jessica Tengrove (Australia) also had an easy win in the Southern Cross University 10 km in 33:05, finishing just behind 50-year-old marathon great Steve Moneghetti (Australia) who ran 32:58 for 31st in the men's division.  Craig Mottram (Australia) won the men's 10 m in 29:38 after outkicking Olympic marathoner Michael Shelley over the last kilometer. 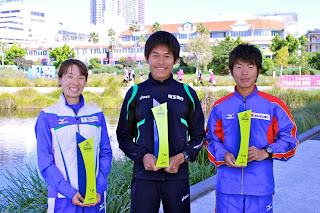 André Roukema said…
The title of the earlier post was "Akaba and Kawauchi Aiming for Course Records at Gold Coast Airport Marathon". If Kawauchi really aimed for the course record then he had the perfect result.
I love to read about this heroic runner and cannot wait to see more results, especially in Moscow.
July 8, 2013 at 3:05 AM

June 25, 2022
Australia's Village Road Show Theme Parks Gold Coast Marathon is set to return next weekend for its first full-on in-person edition since 2019. The elite fields for its half marathon and marathon division are smaller than usual but full of top domestic talent with some international support from the U.S.A., Japan, and elsewhere. A familiar face in Japan, Eloise Wellings leads the women's half marathon, her PB of 1:09:29 set at the Marugame Half in 2016. Earlier this year she ran a marathon best of 2:25:10 in Nagoya and 1:10:42 for 4th at the Gifu Seiryu Half, setting up a good head-to-head race with Jessica Stenson , 2:25:15 in Perth last fall and with a 1:10:59 best in Marugame in 2018. Brett Robinson leads the men's half marathon with a 59:57 NR for the win in Marugame in 2020. Tim Vincent is his strongest competition on paper with a 1:01:43 on the aided Rome-Ostia Half course earlier this year, but Joel Tobin-White , 1:02:03 in Marugame 2019, Commonwealth Games-boun
Post a Comment
Read more

An Update on Japan's Potential Team for Oregon '22