Kawauchi Challenges Kashiwabara to Race Him Next Year in Ome

Will the two biggest stars of Japanese long distance clash in Ome?  After winning Kumamoto's Feb. 17 Kumanichi 30 km in a course-record 1:29:31, Yuki Kawauchi (Saitama Pref.) said that he hopes to run Tokyo's Ome 30 km next year, setting up a potential duel with the Hakone Ekiden's most famous runner, uphill specialist Ryuji Kashiwabara (Team Fujitsu). Kashiwabara, who won the nearly 900 m-uphill Fifth Stage at Hakone four times, three in course records, made his debut at this year's Ome 30 km just after Kawauchi's win at Kumanichi, finishing 3rd in 1:31:49 after leading through 22 km.  "I want to try again next year," Kashiwabara said.  "I can't wait," said Kawauchi.  The God of Mountain vs. the Civil Servant Runner bringing the thrills to the hills.

Kumanichi was proof of Kawauchi's star status.  Launching his fourth surge at 28 km with bared and gritting teeth he was the first man across the line.  In complete control of a four-way battle and emerging victorious, he lived up to pre-race goals and expectations.  And the fans along the course loved it.  "You're #1 in Japan!" people shouted, their jaws dropping when they saw him and the crowds pressing onto the course to get closer, young and old, men and women, boys and girls alike.  There was no doubt Kawauchi fever had hit Kumamoto.

"You used to be able to say that I didn't have any speed, but having broken 3:00/km pace here I think I've cracked that nut," Kawauchi said with a wide smile.  "2:06 is in sight."  Just two weeks after setting a 2:08:15 course record at the Beppu-Oita Mainichi Marathon he became the all-time sixth-fastest Japanese man over 30 km, and having broken the legendary Toshihiko Seko's marathon best in Beppu-Oita, here at Kumanichi Kawauchi took Seko's 30 km best by 1 second.  It's well-known that he operates at the outer limits of common sense, but there is no denying that his strength is now the greatest on the circuit.

But it's not just about his strength.  At Kumanichi 180,000 fans packed the course, 30,000 more than last year.  "It's all because Yuki ran here," said one of the race organizers.  His popularity made such an impact that Kumanichi organizers are already planning to put in an offer to get him back next year.  "I have invitations from over 100 races," Kawauchi says.  "Many of them say that if I can't run this year then next year is OK too."  His schedule for the next year is already all but full. 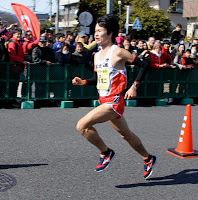 Among his goals for next year is a head-to-head showdown in Ome with the God of the Mountain, Kashiwabara.  Along the crowded street leading to the Ome finish line, the noise of the crowd and camera shutters swelled to its greatest peak when Kashiwabara came through in 3rd.  He was unusually quick to say he plans to return to Ome.  At the post-race press-conference he matter-of-factly told the media corps of over thirty that he intends to run Ome again next year.  "Today wasn't a matter of the course not suiting me," he said.  "I want to come back next year and go for the win again if I can.  There were so many people cheering along the course.  It was a lot of fun to run here."

Before the Ome start Kashiwabara heard news that Kawauchi had just won Kumanichi. He and eventual Ome winner Masaki Ito (Team Konica Minolta), both the same class year in college, talked about it before the start.  Their motivation going up a notch, all they could say was, "Unbelievable."  Kashiwabara led Ome on course record pace through 22 km, but, he said afterward, "my legs turned into sticks after 22 km."  Ito and his teammate Tomohiro Tanigawa (Team Konica Minolta) pulled away on the downhill and flat of the final 8 km to leave Kashiwabara in 3rd.  "I'm pretty unhappy to get beaten by somebody the same age as me," Kashiwabara told reporters.

Kashiwabara hopes to run the marathon at the 2016 Rio de Janeiro Olympics.  Aiming to clear the first checkpoint toward that goal, "going at 3:00/km pace," he entered the 30 km at Ome, the longest distance of his career so far.  But just past the halfway point of the marathon distance he could no longer hold on to the pace.  "I couldn't push the second half like Kawauchi can.  I don't have that kind of toughness," he said, feeling the sting of disappointment at not living up to his own expectations.

Kawauchi ran Ome in 2007, finishing only 10th in 1:36:27, but its course remains one of his favorites.  "There's no chance I could beat Kashiwabara on the uphills, but on the downhills I can take him," he said, already laying out his strategy for the difficult undulations of the Ome course.  Of Kashiwabara's performance Kawauchi said, "He got too caught up in trying to lead and blew it.  I think it was a good experience for him.  I can't wait to race him next year."  Kashiwabara modestly said, "I don't really deserve to be compared to him.  I'm really flattered that somebody as great as him would say something like that about me."  With a glint of competitive spirit flashing in his eyes he added, "But I'd like to see how much I can take him by.  If I don't have any injuries over the next year then I want to come back stronger next time.  My job will be to get the win and to give everyone who comes to watch something to remember."

At the Hakone Ekiden Kashiwabara was the biggest star the event has seen thanks to his uphill heroics.  Kawauchi ran Hakone twice on the Kanto Region Select Team while a student at Gakushuin University, both times on the ~900 m downhill Sixth Stage where he was 6th in 2007 and a strong 3rd in 2009.  The Ome course has a maximum elevation difference of 85.8 m, with an abundance of rolling ups and downs.  The uphill specialist vs. the downhill specialist on a celebrated and hilly course.  Bound to pull in the fans, it should be one of the biggest showdowns in Japanese racing history.  And one that will give them both the confidence to take on the best in the world.