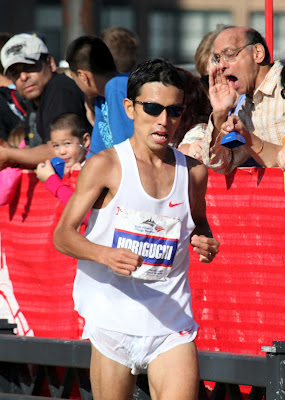 Long one of the races of choice for Japanese athletes looking to run a fast time overseas and the home of Toshinari Takaoka's 2:06:16 Japanese national record, for the second year in a row the Chicago Marathon is playing host to a group of developmental-level Japanese men.  This year's group is a step above last year's, including one 2:09 man, one 2:10, one 2:11 and two 2:12 runners.

The Japanese federation has said that a sub-2:08 in any of the Majors will put the runner into the stable for next year's Moscow World Championships marathon squad, but of the men in Chicago only veteran Takashi Horiguchi (Team Honda) looks to be in contention.  After taking eight years to break his 2:12:06 debut time Horiguchi has been on a roll for the last year and a half, PBing twice and becoming one of eight Japanese men so far this year to have broken 2:10 with a 2:09:16 in cold rain at Lake Biwa in March.  He trained all summer with teammates Masakazu Fujiwara and Suehiro Ishikawa, both of whom ran 2:11 in Berlin last week, but is reportedly in better shape.  Sub-2:08 is a stretch, but even a sub-2:10 should ultimately put him into contention for Moscow.  It should be interesting as well to see how he stacks up against 2:09:55 American favorite Dathan Ritzenhein.

Team Toyota captain Takeshi Kumamoto was one of the many to come close to adding to Japan's sub-2:10 tally this spring with a 2:10:13 in his debut at the Tokyo Marathon.  If he and Horiguchi or another of the Japanese men in Chicago manage to cross that barrier it will make 2012 the fourth year that Japan has seen ten or more sub-2:10 performances.  Apart from Japan only Kenya and Ethiopia have ever had ten sub-2:10s in a year, making it a worthy sub-goal behind the federation's somewhat optimistic sub-2:08 WC selection criterion.  Like Kumamoto having debuted in the spring, the Takaoka-coached Hiroki Kadota (Team Kanebo) and 23-year-old Koji Kobayashi (Team Subaru) will most likely be looking to at least equal their 2:12 debuts, possibly providing a carrot for the 2:12-2:15 Americans in the field to chase.

Next to Horiguchi Yuki Moriwaki (Team JFE Steel) is the most experienced marathoner among the Japanese men, having progressed steadily since his 2:16:37 debut in Nobeoka in 2009 to a 2:11:52 best at this year's Beppu-Oita Mainichi Marathon.  His dynamic style has always suggested the potential for something more, so a breakthrough would not be especially surprising.  One other 2:12 Japanese man, Team Chugoku Denryoku ace Naoki Okamoto, was originally on the Chicago entry list but is instead running the Oct. 6 World Half Marathon Championships in Kavarna, Bulgaria.

Also worth a mention in the context of their Japanese connection are Kenyan 2012 Lake Biwa Mainichi Marathon winner Samuel Ndungu and 2012 Dubai Marathon runner-up Lucy Wangui Kabuu, also of Kenya.  Ndungu has been a strong presence on the Japanese scene for several years with the Aichi Seiko corporate team, winning his debut at Lake Biwa in a solid 2:07:04 despite the rain.  Kabuu is a graduate of Aomori Yamada H.S., having spent time on the Suzuki team before heading out to make her fortune on the roads.

The same day as Chicago, the JR Higashi Nihon team's Kiyokatsu Hasegawa will make his U.S. debut in the Twin Cities Marathon through the assistance of JRN.  Hasegawa has taken the unusual approach among corporate runners of spending time developing his endurance in ultras before making a serious move to the marathon, winning the 2011 Lake Saroma 100 km in 6:31:06 to end the year as the third-fastest man over 100 km.  Despite this achievement and his 1:02:26 best for the half marathon Hasegawa's three marathons to date have all come in the 2:15-2:16 range, but in the Twin Cities he is hopeful of running 2:12-2:13, a time which could put him into contention for the win.  Follow Hasegawa on Twitter here.