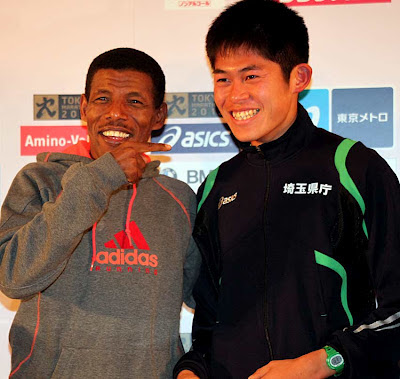 A day after the Tokyo Marathon Olympic selection race, pre-race favorites Arata Fujiwara (30, Tokyo T&F Assoc.) and Yuki Kawauchi (24, Saitama Pref.) were on opposite sides of the fence after finishing 2nd and 14th.  While Fujiwara celebrated securing his Olympic ticket, Kawauchi appeared at a post-race ceremony at his high school with a "penitent" shaven head, a sign of how seriously he has let go of his hopes of making the London Olympic team.  "I was unable to produce results and I want to apologize to everyone who has supported me," he said.  "My shot at the Olympics is over.  With this result I do not expect to be selected.  I have no regrets about it."

The same day, former world record holder Haile Gebrselassie (Ethiopia) made an appearance as a "coach" at an Adidas-sponsored program at a Tokyo-area school after finishing 4th in the Tokyo Marathon.  When a journalist showed him a picture of the bald-headed Kawauchi, Gebrselassie gave a shout of surprise and shock.  Hearing of Kawauchi's words of despondency Gebrselassie sent him his personal encouragement, saying, "You cannot give up.  If today was a bad day then you must look to tomorrow, and then to think of next year.  There is no other choice."

Although he has given up on his Olympic dream, the truth of the stimulus this full-time working amateur has provided to the Japanese men's marathon world remains unshaken.  "If other Japanese athletes make us all proud and run 2:06 or 2:07 to make the Olympic team then maybe my being here meant something," he said.  In the wake of Tokyo he plans to run the April 29 Metro Group Dusseldorf Marathon, where German Olympic hopefuls and Kenyans will also be lining up.  "This time I want to run in the lead pack and then show all the Germans and Kenyans the strength of the Japanese," he said.  For Kawauchi's competitive spirit, there is no finish line.