Ndambiri With the Win, Kawauchi With the Wonder - Fukuoka International Marathon

Ndambiri for the win. Click photo for video highlights courtesy of KBC TV.  Click here for a sequence of photos from throughout the race via KBC.

In many ways the 65th Fukuoka International Marathon played out according to script, but in the details it worked out to be the most memorable edition since Samuel Wanjiru's debut in 2007.  Longtime Japan resident and 10000 m all-comers record holder Josphat Ndambiri (Kenya/Team Komori Corp.) made a good transition to the marathon, winning his debut in a solid 2:07:36.  Veteran James Mwangi (Kenya/Team NTN) took two minutes off his four-year-old PB to finish an elated 2nd in 2:08:38.  And in the Japanese men's race for an Olympic spot, what initially looked like a replay of amateur Yuki Kawauchi's thrilling come-from-behind run at Tokyo in February turned into a brutal, knockdown battle of surges between pre-race favorites Kawauchi and former Hakone Ekiden star Masato Imai (Team Toyota Kyushu). 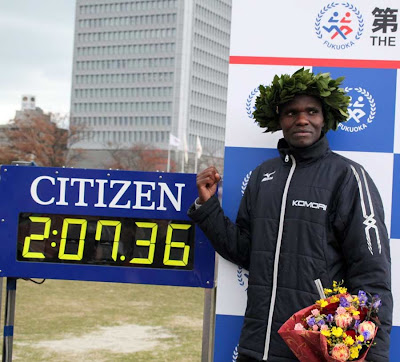 The race went more or less on-schedule through 20 km.  Absent some of the foreign elites all the key players were in place, but having already fallen back once together at 15 km Kawauchi and 2010 runner-up Dmitriy Safronov (Russia) again lost touch with the pack at the 20 km water station.  At 25 km, 10 seconds off-target in 1:15:10, the pacers departed, leaving a comfortable Ndambiri in the lead.  Looking around and then wasting no time in making his decision, Ndambiri rocketed the next 5 km in 14:32 to say a permanent goodbye to the rest of the field.  He went through 35 km in 1:44:39, on-pace for 2:06:10, before slowing to cross the line in 2:07:36.  With a good debut behind him it seems likely that we'll see Ndambiri overseas in the spring in a bid for the Kenyan Olympic marathon team like Wanjiru four years ago.

Mwangi tried to follow Ndambiri but was immediately on his own, running alone all the way to his 2:08:38 PB finish.  Coached by Barcelona Olympics marathon silver medalist Koichi Morishita and revered in Japan for his three years of heroics on Hakone's celebrated uphill Fifth Stage, Imai, 2009 World Championships marathoner Kazuhiro Maeda (Team Kyudenko) and Irish star Alistair Cragg formed the chase pack with 2005 Fukuoka winner Dmytro Baranovskyy just behind.  Cragg very shortly dropped out of the pack, and then the race, but Imai and Maeda were joined by a surging Naoki Okamoto (Team Chugoku Denryoku).  The Japanese trio passed 30 km in 1:30:50 with Baranovskyy trailing.  23 seconds back, Safronov and Kawauchi, whose face showed the same strain and agony it did in the last 3 km at Tokyo.  At the 30 km mark Maeda made a move to put Okamoto away, and Imai went with him.  The pair worked together, but absent any external pressure their pace began to slip. 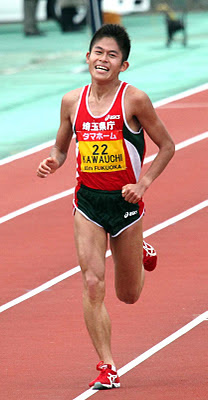 Safronov and Kawauchi likewise worked together to begin making up ground until Kawauchi lost patience and made a move at 33.2 km, his first time going ahead of the Russian.  Safronov responded and the two passed first Baranovskyy and then the fading Okamoto.  With Imai and Maeda coming into range Kawauchi made another surge, dropping Safronov and closing the gap to his rivals for an Olympic spot.  At 36 km a spectator yelled, "Go Kawauchi!" loudly, and, hearing him, Imai looked back.  And the action began.

Imai picked up the pace, Maeda tagging along as they tried to keep their margin over the fast-closing Kawauchi.  Kawauchi responded by turning it all on, blowing by them even more aggressively than he did against Yoshinori Oda (Team Toyota) and Cyrus Njui (Kenya/Team Hitachi Cable) in Tokyo.  The difference was that in Tokyo the move came at 39 km.  Here, it was 36.4 km.  Maeda tried to follow, and when Kawauchi tired from his surge Maeda was right back with him.  Imai took longer to regain contact, but when he did Kawauchi took off again at 38.5 km.  This time Maeda was gone for good.

Imai came back at 39.3 km, and it became the kind of race organizers dream about, two intensely popular runners going for the throat one against the other for their Olympic dream.  Imai surged. Kawauchi surged.  Imai!  Kawauchi!  If you weren't a fan of the sport this was the kind of race that would make you one, and if you were you'd be jumping and shouting like thirty of us were in a sushi place in the mountains west of Tokyo.  Surge, attack, counter, on and on until finally Kawauchi, able or willing to go somewhere Imai couldn't, went to the limit at 40 km to break Imai down.  Kawauchi clocked 6:50 for the final 2.195 km, the fastest in the field by 18 seconds and 22 seconds faster than Ndambiri's closing split.  That's 16 seconds a mile at the finish.  Across the line in 2:09:57, a characteristic collapse, oxygen on a stretcher, and a tearful Imai empty-handed and desolate except for the minor consolation of a 9-second PB.

In the bigger scheme of things you may say, "Who cares?  2:09 is 2 km behind the best Kenyans." "The top Japanese men ran 2:07 at the last two Olympic selection-year Fukuokas.  This only shows how far Japanese marathoning has fallen."  It's true, 2:09:57 and 3rd place isn't that competitive and is not good enough to guarantee Kawauchi a spot on the Olympic team.  But with a race like this he sure as hell deserves it.  2:09:57 puts him into a new place, one where Tokyo wasn't just a Hollywood miracle, one where he is the real thing.  Under extreme media attention and hype, including ridiculous ads for the Fukuoka broadcast showing him running in a business suit wearing a backpack, the self-training Kawauchi stuck to his principles and did things his way.  He went up against the elite, one of Hakone's greatest stars, one coached by an Olympic silver medalist who took another runner to Olympic gold.  And rejoice, for he conquered.  If the federation picks him or no, he's got nothing to prove to anybody. 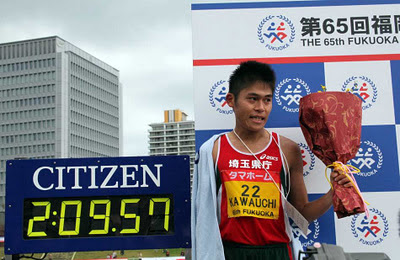 Look for Kawauchi to run the Hofu Yomiuri Marathon in two weeks and the next Olympic selection race, February's Tokyo Marathon.

brent said…
Awesome recap Brett. Thanks. I was only able to watch the first 5k online. Should have stayed up for the rest.
December 4, 2011 at 10:18 PM

colin said…
Great recap. I watched the last 15km of the race, and it was the most exciting marathon finish that I have seen in a long time. Kawauchi is incredible.
December 5, 2011 at 12:23 AM

I wonder why do Josphat Ndambiri and James Mwangi are listed as japanese on their registration at Fukuoka Marathon. Do they have double nacionality?

Brett Larner said…
As far as I know it is because they are both Japan-resident and, as such, are registered with the Japanese federation. The organizers thus put them in the Japanese general division rather than the foreign one. That was the case when I ran Fukuoka, at any rate.
December 7, 2011 at 2:04 PM

Masato Yoshihara said…
Brett, I found a video on Youtube of the last 15 minutes of the race. Here it is:http://www.youtube.com/watch?v=AzWtbYGBSAk.
December 26, 2011 at 7:15 AM