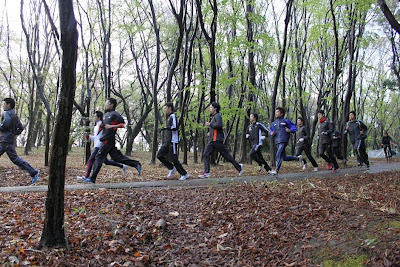 Team Tepco during a group tempo run at 5:45 a.m. in Tokyo's Yoyogi Park in spring, 2010.
Due to the ongoing situation at its Fukushima Daiichi nuclear power plant, Tokyo Denryoku, or TEPCO as the company is known in English, announced on April 11 that it is suspending its men's ekiden team. The team did management did not renew its jitsugyodan corporate league registration this season, meaning that the team is not elligible to take part in the New Year Ekiden or other jitsugyodan league competitions. Team members are, however, not restricted from competing independently in other races.
The team's athletes and staff have all been sent to work at locations in Fukushima and surrounding areas. Head coach Shigeo Daigo, 43, commented, "These are emergency circumstances, and our top priority right now is to help get control of the situation. Our athletes will be working alongside the other employees as one company." There are no current plans for when the ekiden team will resume activity.
The Tokyo Denryoku team has competed in the last three straight New Year Ekiden national championships. From 2008 until last year it was coached by 1991 World Championships marathon gold medalist Hiromi Taniguchi.

May 05, 2021
The test event for the Tokyo Olympics marathon went off as planned May 5 in Sapporo on a course more or less mirroring the first half of this summer's Olympic course. Strong winds from the south meant a slow start over the first 8 km, super fast splits from the turn to the north just before 10 km until after 15 km, and a technical finish into the wind over the narrow and winding last few km through the Hokkaido University campus. After a slow first km, Olympic marathon women's team members Ayuko Suzuki (Japan Post) and Mao Ichiyama  (Wacoal) plus alternate Mizuki Matsuda (Daihatsu) took it out hard with pacing courtesy of one of Ichiyama's male coaches. They stayed together on 1:08 pace until almost 18 km before Suzuki slipped away, Ichiyama kicking to win in a 1:08:28 PB and Matsuda closing hard in 1:08:32 for 2nd, likewise a PB. Ichiyama's time moved her up to all-time Japanese #6, with Matsuda picking up the #7 spot and knocking her coach Miwako Yamanaka  out of t
1 comment
Read more

May 06, 2021
International athletes who competed in yesterday's Tokyo Olympics test event half marathon in Sapporo gave high marks to the event's coronavirus protocols.  Dutch athlete Bart Van Nunen  said, "The measures against COVID-19 were perfect. I didn't feel there were any problems." International athletes were not allowed to go out in public or use public transportation and were required to eat in their hotel rooms. "I felt that this just showed the kind of measures they were taking," said Van Nunen. Men's winner Hillary Kipkoech  of Kenya commented, "It was very tough with the strong wind, but the course itself was excellent." Translator's note:   In contrast to the athlete comments here, a story published on Saturday by Inside the Games  on COVID-19 countermeasures at Olympic test events this week, which for whatever reason didn't mention the marathon test event, selected only negative quotes from athletes, who were quoted as complai
Post a Comment
Read more