Update: Reader vilagoiberia just sent me a link to this video of the last 6.5 km of Kawauchi's run. 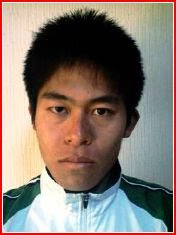 With the day dawning with ideal conditions, 7 degrees, light partial cloud cover and gentle winds, everyone knew the race would be fast. 19 year old pacer Bitan Karoki (Kenya/Team S&B), who ran a course record 27:52 a day earlier in the senior men's 10k at the Fukuoka International XC Meet, took the race out slightly ahead of schedule, splitting 14:56 for the downhill first 5 km and 14:59 for the next. 15 km went by in 44:49, 20 km in 59:53 and halfway in 1:03:11. People began to fall off the pack soon after halfway, and following 25 km formerly Japan-based Ethiopian Hailu Mekonnen and Kenyan Paul Biwott notched up their speed along with pacer Henry Sugut, breaking up the pack and opening a gap that was never closed. Mekonnen in turn got away from Biwott with 9 km to go and ran alone unchallenged the rest of the way. With temperatures rising to the mid-teens he slowed roughly a minute off his projected low-2:06 finish, holding on for a two-second PB to win in 2:07:35 but missing the course record of 2:07:23. In his post-race interview Mekonnen expressed his happiness at winning his first marathon in a return to Japan and dedicated the joy to his wife. Biwott hung on to 2nd in 2:08:17, but the big story was happening further back.

As the two leaders pulled away after 25 km, Japan-based Kenyan Mekubo Mogusu (Team Aidem) led four others in a chase pack: second-time marathoners Cyrus Njui (Kenya/Team Hitachi Cable) and Takaaki Koda (Team Asahi Kasei), debutant Yoshinori Oda (Team Toyota) and 23 year old Saitama Prefectural Government worker and amateur runner Yuki Kawauchi. A surge by Oda after 30 km dropped Koda and Kawauchi, and the race broadcast became fixated upon Oda, well on track to break the debut marathon national record of 2:08:12. Mogusu soon faltered, leaving Oda and Njui to battle as they went on to the first of the five bridges in Tokyo's last 6 km. Oda's coach was elated at his runner's strong debut performance, a possible record on the way and a guaranteed spot on the World Championships team his if Oda held on to clear the 2:09:30 time requirement. Then, the cameras shifted to show Kawauchi coming up from behind.

Kawauchi was one of the big surprises of last year's Tokyo Marathon. In university he had opted to attend an academically-oriented school instead of a Hakone Ekiden powerhouse, taking satisfaction from beating runners who had chosen sports over academics. Making Hakone several times as a member of the select team and showing exceptional toughness on the downhill Sixth Stage he attracted offers from a variety of top corporate teams post-graduation but again chose to spurn the system. Saying that he wanted to show younger runners that they didn't have to join a corporate ekiden team to be successful he took a full-time office job with the Saitama Prefectural Government, fitting in his training schedule around his 9-hour workday. He ran several marathon PBs in a row, broke 14 for the first time over 5000 m, then in the freezing rain of last year's Tokyo Marathon took 5 minutes off his PB to finish 4th in 2:12:36, a major accomplishment. Following up with a low-29 10000 m PB, he struggled for much of the rest of the year, running only 2:17:54 at Fukuoka in December. Earlier this month he ran a surprising 1:02:40 half marathon PB at Marugame, suggesting that he might get down to 2:10 territory if all went well in Tokyo. It did.

As Oda and Njui began to show signs of strain they settled into a cruising mode, giving up on an ambitious time and working together to stay alive but oblivious to Kawauchi's approach. At 38 km just before Kawauchi made contact Oda's coach sounded the warning bell, but although Oda picked up the pace Kawauchi gritted his teeth, closed his eyes and surged past the surprised pair. Njui tried to follow but Oda could not keep up and let go. On the edge of his abilities, Kawauchi, wearing a singlet that said simply, "Saitama," continued to run with eyes closed, almost missing a right turn before 40 km and losing seconds to Njui and Oda who took the corner sharp. On the second to last hill at 40 km Kawauchi put his chin all the way down on his chest and attacked. Njui was broken.

Kawauchi ran away free into 3rd, surging again on the final uphill at 41 km as Biwott in 2nd place came into sight. Going all out, Kawauchi was barely staying on his feet and nearly fell rounding the final corner, but he kept going and even mustered up a kick to take 3rd in 2:08:37 with the fastest last 2.195 km in the field, a 4-minute PB, the fastest time by a Japanese man since 2008, the fastest ever by a Japanese man on the Tokyo course, picking up a guaranteed spot on the World Championships team, a BMW for being the first Japanese man, and a legend. He fainted a few steps across the line and was taken away to the medical area in a wheelchair, unavailable for a post-race interview.

Oda overtook Njui for 4th in an outstanding 2:09:03 debut and filled in for Kawauchi when the media came. It's very possible he will also make the World Championships team, and combined with Kawauchi Oda's run suggests that the glitch in Japanese men's marathoning over the last two years may after all be largely due to a generational gap. Or maybe it's just a lack of toughness. Unfortunately for Oda, his excellent run was completely overshadowed by Kawauchi's performance, a run so good it should have been fiction. A full-time worker with an old-school attitude and work ethic who trains alone in his spare time on a mission to show up the system in an era of hand-wringing by those who control it, and he did it. He's going to the World Championships. Maybe the Olympics. If Arata Fujiwara leaving the system last year was a body blow, this was a knockout punch.

In the women's race, most of the attention was focused on the return of former national record holder Yoko Shibui (Team Mitsui Sumitomo Kaijo) to the marathon after an absence of almost two years. First-timer Misaki Katsumata (Team Daiichi Seimei), a training partner of Yokohama International Women's Marathon winner Yoshimi Ozaki, went out at 2:25 pace while Shibui, looking heavy and awkward, ran more conservatively behind. By 27 km Katsumata was slowing, only able to look over helplessly as Shibui picked it up and went into the lead. It looked as though Shibui would manage the win, but in the final kilometers she faltered and was overtaken first by Russian Tatiana Aryasova, then debutante Noriko Higuchi (Team Wacoal), then, in the final stretch, by Russian Tatiana Petrova. Aryasova took the win in 2:27:29, with Higuchi completing a solid 2:28:49 debut for 2nd, Petrova close behind in 3rd in 2:28:56. Shibui wound up 4th in 2:29:03 as Katsumata rounded out the top five over two minutes back.

Brett Larner said…
He had significant training setbacks last month. I believe his Japanese sponsors will be issuing a statement.
February 27, 2011 at 3:52 PM

Brett Larner said…
Some other details:

-husband and wife Masaru Takamizawa and Kiyoko Shimahara are both retiring after Tokyo, as is Takashi Ota

-Hiroshi Neko is a comedian and television personality. He broke 2:50 at the Niagara Falls Marathon last year and was shooting for sub-2:45 this time
February 27, 2011 at 6:49 PM

Brett Larner said…
I just bumped into duathlon national champ Yuya Fukaura, a former training partner of Kawauchi's, in the park. He couldn't believe Kawauchi's run and ascribed it to his intense spiritual toughness. He said the last thing he can imagine is Kawauchi driving around in a new BMW.

Winner Mekonnen also has a nice progression to his marathon performances:

TokyoRacer said…
Japan may not have the best marathoners, but they have the best comedian runners. First there is Kampei-chan, who ran around the world, now Hiroshi Neko (neko means cat) running 2:37. He's a short guy and was wearing funny shorts, and was going like the blazes when he passed our cheering group at about 40km.
February 28, 2011 at 9:48 AM

[After recovering from an injury setback in early Jan.] my training was insufficient this time. If it had been a 2:09 race I think it would have been OK, but the pace today was too hard. Kawauchi was incredible.
February 28, 2011 at 11:23 AM

Phil S said…
I love this Kawauchi, he is awesome. Apparently he brought a suit with him to the marathon, so he could get up early this morning and go straight to the school he works at by 8:15am. Today is apparently the day for School Entry applications, so he is staffing the desk.

Apparently he brought a suit with him to the marathon so he could go straight to work. Wow!

Simon Phillips said…
Awesome, awesome result for Kawauchi - just incredible... Terrific write-up too. I was excited just reading it!!
March 1, 2011 at 12:09 AM

Adam O said…
Thats a truly inspirational story. Its good to see there's still room for the independent runner, especially as governing try and exert more control over the sport.
March 3, 2011 at 7:29 PM

taking photos said…
I just want to say how much I appreciate your blog. I like to go out to the race (Hakone Ekiden and Tokyo marathons) to take photos and capture the crowd/mood from the fringe. So when I get home I head for your blog to figure out what happened. Thanks so much for your valuable service.
March 6, 2011 at 6:40 PM