On a windy and wild Nov. 23, a select team of Japanese university all-stars staged a surprise upset at the 2010 International Chiba Ekiden, coming up in the second half of the race to take its first-ever win over a field including ten national teams. 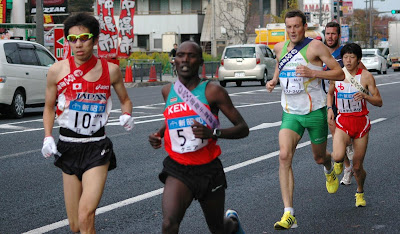 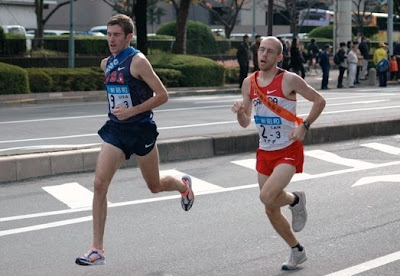 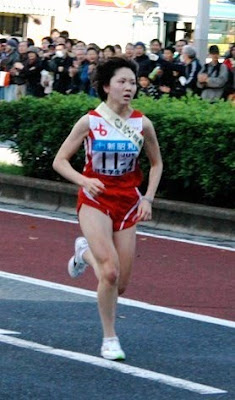 From there things took an unexpected turn. Despite having a 5000 m PB 30 seconds better than either Japanese runner, Kenyan 4th Stage runner Rispar Biyaki lost ground to the Japanese team's Tomoka Inadomi and 2010 National University 5000 m champion and double 2009 World University Games medalist Kasumi Nishihara (Bukkyo Univ.). Nishihara took advantage of Biyaki's momentary wrong turn at the 180' turnaround to seize the lead, the first time in Chiba history that the Japanese University team had taken the lead. Nishihara held on to build a 16 second lead in the second half of the stage, setting up for an action-packed final two stages. 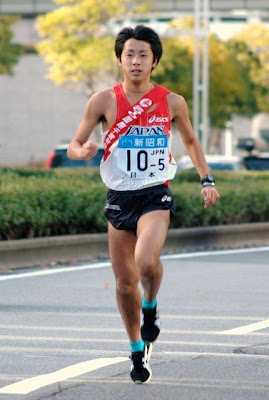 Tsuyoshi Ugachi (Japan) running down the leaders on the 5th Stage. 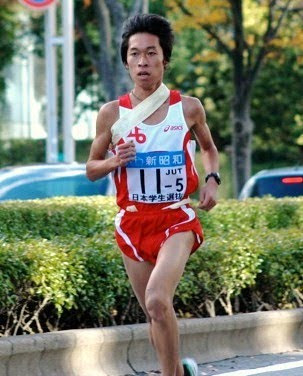 With one km to go he caught 2009 Ageo City Half Marathon winner Shota Hiraga (Waseda Univ.). The pair battled over the final hills but Ugachi succeeded in breaking away from his younger rival, finishing the stage 1 second ahead and just 2 seconds off the stage record, no small feat considering the wind. 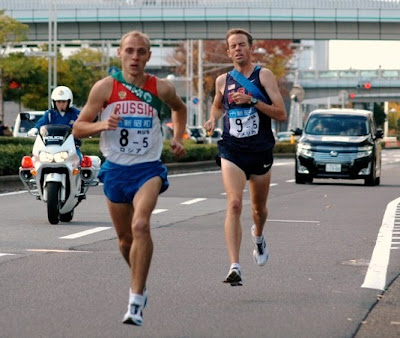 Aaron Braun (U.S.A.) goes beyond himself to catch Anatoly Rybakov (Russia) on the 5th Stage. 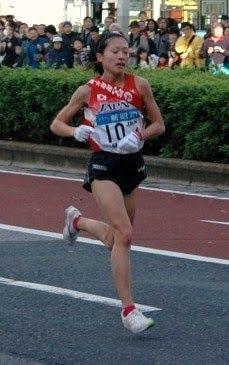 Clearly showing her PB to be in need of an update, Tanaka had no trouble hanging with Shimizu, while behind Korikwiang bore down on the pair. The second Korikwiang made contact, with exactly 3 km to go, Shimizu and Tanaka both leaned forward and attacked. Korikwiang relaxed, then went by on the inside of a corner. Tanaka responded, while Shimizu began to slip behind. With 2 km to go Tanaka pushed her way up a hill, and Korikwiang let her go. The gap surprisingly continued to widen, and the Kenyan was never again a threat as Tanaka came in for a historic win to the surprise of pretty much everyone involved. Korikwiang held Shimizu off for 2nd, with Russia's Irina Sergeeva outrunning American Meghan Armstrong for 4th. 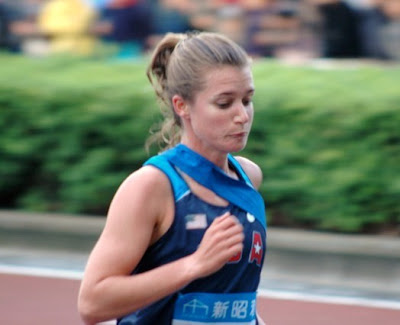 Kimberly Conley (U.S.A.) resigns herself to a stage 2nd-best time.

Kenya, Japan, Russia and the U.S.A. teams all performed exactly as expected, finishing in precisely that order, but it was a shock to see the University team exceed expectations by such a significant degree. Along with this past weekend's results from the Ageo City Half Marathon, where Waseda University freshman Suguru Osako set an Asian junior record of 1:01:47, and the Nittai University Time Trials, where Jobu University senior Yusuke Hasegawa ran the fastest 10000 m time of the year by a Japanese university student, 28:07.47, and led unprecedented numbers of university runners under 29 and 14, it shows that despite the lapse in the current generation of Japanese marathoners there is no shortage of talent coming up through the pipeline. If Japan can make the necessary adjustments to its system to cope with changes in world marathoning in time for this young generation's prime years then its future will look good indeed.

Jon in Tokyo said…
Great race. Excellent coverage except that 7th place Aussies did not get any screen time.
November 23, 2010 at 4:00 PM

Brett Larner said…
Yeah, only Mottram was up there for a while. Thumbs up to Malindi Elmore for getting Canada into the picture for a while, and American Aaron Braun gets the JRN seal of approval for the 2nd-best time on the 5th stage.
November 23, 2010 at 4:11 PM

TokyoRacer said…
Bobby Curtis also ran a good opening leg for the US. Anytime you beat Craig Mottram, you're doing ok. In fact, the whole US team did pretty well.
But the two university girls, Nishihara and Tanaka, were really impressive.
November 23, 2010 at 9:10 PM

Brett Larner said…
I forgot to give credit to Canada's Carmen Hussar and the U.S.' Kim Conley, who tied for the 2nd-best time on their stage despite neither being in the top 5 by PB. Great run for both them and Braun.
November 23, 2010 at 10:57 PM

Unknown said…
Great coverage. Too bad the Ekiden style relays can't catch on in the U.S. Can you imagine a Ekiden race with corporate logos on the shirts? I know the NYRR held them a number of years ago, but it didn't catch on.
November 25, 2010 at 12:59 AM