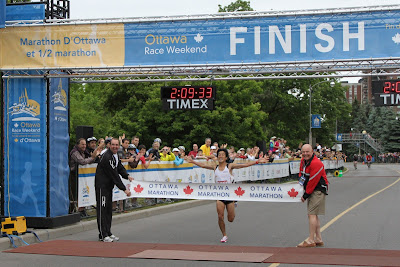 In his first race since his unprecedented departure from Team JR Higashi Nihon at the end of March, Arata Fujiwara won the 2010 Ottawa Marathon on May 30. Fujiwara broke the existing course record by one minute two seconds, outkicking Kenyan Laban Moiben and junior world record holder Bazu Worku of Ethiopia to win in 2:09:33.4. His time on the difficult course was the fastest of the year by a Japanese man and came three months after his 2nd place finish in sleet and wind at February's Tokyo Marathon. 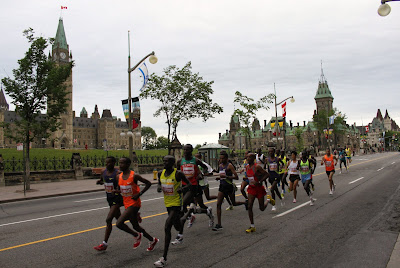 A slower than expected first 10 km over challenging hills through Quebec scuttled the expected attack on the Canadian all-comers record on 2:08:32 from last fall's Toronto Waterfront Marathon, but the top four men all broke the previous course record of 2:10:35. Two of the three pacemakers dropped off far earlier than planned, leaving Kenyan Festus Langat to do the rest of the work through 30 km. Langat struggled after 27 km, dropping as slow as 3:10/km before dropping out. Moiben immediately attacked, putting in a 2:55 km and cutting the lead pack down to five. He attacked again at 37 km, and this time Fujiwara was the only athlete to follow. Worku regained contact, but with one km to go Fujiwara applied pressure which dropped the Ethiopian and left the Kenyan dangling. With 500 m to go Fujiwara was free and clear and sailed in to claim his first marathon victory in his first-ever successful overseas run. 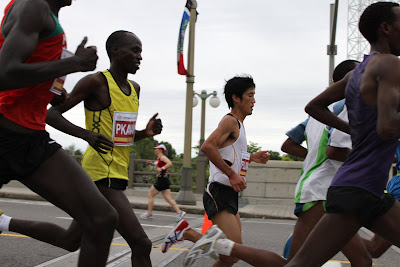 "The course was very tough with the hills in the first 10 km," Fujiwara told reporters after the race. "I felt terrible for the first 20 km, but then everything clicked into place. The whole last 500 m I was thinking about the beer that was waiting for me at the finish. This win is a big step forward for me, but more than what it means for me I hope it shows other Japanese runners that there are different ways to have a career and that the corporate team system needs to become more flexible." Fujiwara plans to run July's Sapporo International Half Marathon before heading to Ethiopia for high-altitude training. 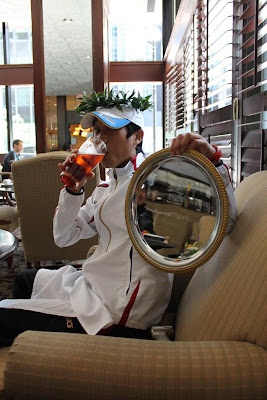 In the women's race, Ethiopian Merima Mohammed ran unchallenged to win in 2:28:19 with a margin of nearly seven minutes over runner-up compatriot Radiya Adlo. Canadian Rick Ball also set a world record of 2:57:48 for an amputee marathon, the first one-legged marathoner to break three hours. 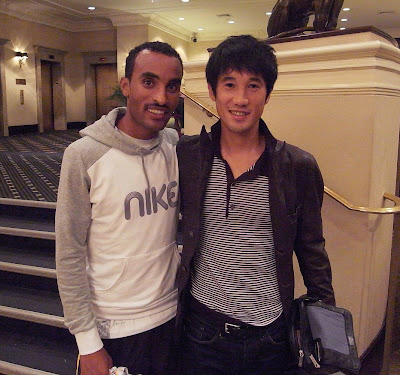 Update: Among the articles covering Fujiwara's win, the Ottawa Citizen had a long article on Fujiwara's win and what it means for him. Global TV's piece was also good. This French-language article is in-depth and interesting. Lastly, a shoutout to the Metro's Tracey Tong for her pre-race and post-win coverage.

Brett Larner said…
Dude starts blog. Two and a half years later, here we are.

Simon Phillips said…
I've been a bigger fan of Fujiwara since reading your interview with him. Congratulations to him on a fine start to 'part II' of his running career (and 'part I' of yours as an agent!).
May 31, 2010 at 10:46 PM

Haricot 微豆 said…
I was there when he received the award. What a great, record-breaking finish !!!!