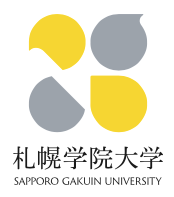 The Hokkaido University Ekiden took place Aug. 14 in Sapporo's Moerenuma Park, with women covering 35.86 km in six stages and men 101.06 km in eight stages. In the women's race, Sapporo Gakuin University scored a fifth-straight prefectural title, all six of its athletes winning their stages and covering the total distance in 2:11:31. The team's win secured its place at the Oct. 31 National University Women's Ekiden in Sendai. The Sapporo Gakuin men won in 5:19:31, their fourth-straight and 28th overall prefectural win. They likewise qualified for the National University Ekiden, taking place Nov. 7 in Nagoya for men.
The women's decisive win came under new head coach Hiroyuki Kudo, 71, who previously led the Otani Muroran H.S. boys and girls and the Sapporo Nichidai H.S. girls to a combined 21 National High School Ekiden appearances. 2nd-year Sena Onishi generated the team's momentum on the opening leg. Last year Onishi was unwell and lost more than 10 kg, preventing her from competing with the team. But under Kudo's guidance she returned through a program of walking and meal management. At the ekiden she opened a lead of more than 2 minutes over 2nd place. "I wanted to pay back my debt of gratitude to Coach," she said post-race.  Onishi and the other 1st and 2nd-year team members volunteered at last weekend's Tokyo Olympics women's and men's marathons held in Sapporo and were inspired by the experience of seeing the world's best in action from close up.
4th-year captain Maria Abe took on the longest leg, the 9.78 km Fifth Stage. At June's National University Individual Track and Field Championships Abe was 5th in the 10000 m race walk in a Hokkaido prefecture collegiate record 48:54.90. "I really wanted to show the results of four years of work this ekiden season too," she said. "At Nationals I want us to go for our best-ever team placing, 18th."  Coach Kudo commented, "Even during corona, the team members kept sight of their goals and continued to work independently. Together we can overcome the challenges of this era and create a new tradition."
In the men's race, Sapporo Gakuin star runner Lawrence Ngure was unwell and did not run. Running the race for the first time as a 4th-year, team captain Reiya Kotani maintained the lead on the Third Stage in its second-fastest time. "I wanted to give the younger guys on the team a sense of security," he said. In his years at Asahikawa Ryukoku H.S. the school didn't have a boys' ekiden team, so Kotani ran as a workout pacer for the girls' team, a regular at the National High School Ekiden, helping them develop. In university he has also focused on helping younger team members develop, leading to the team running a new course record. "When Ngure is back we'll be able to target our school record of 19th at Nationals," he said.
source article:
https://hochi.news/articles/20210815-OHT1T51019.html
translated by Brett Larner