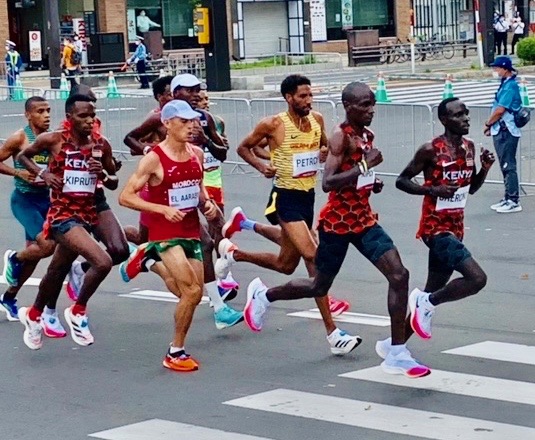 The men's marathon wrapped up athletics competition at the Tokyo Olympics, with heavy hopes of a medal made all the heavier by a DNF in the men's 4x100 m relay final. When Colombian Jeison Alexander Suarez took the race out harder than expected Japanese marathon trials winner Shogo Nakamura held back from going with the front group, setbacks in his training over the last year giving him reason for caution. 2018 Fukuoka International Marathon winner Yuma Hattori and 5000 m national record holder Suguru Osako went with it, Hattori lasting through 20 km before dropping and Osako until just after 30 km when eventual winner Eliud Kipchoge dropped a 14:28 split for the next 5 km.
Osako worked his way into 6th and looked briefly like he might catch back up to the main chase group of four, but once he got within 15 seconds of them he stalled and simply held position. Kipchoge took his second-straight Olympic gold in 2:08:38. Somali-born Abdi Nageeya and Bashir Abdi took silver and bronze for the Netherlands and Belgium respectively, beating Kenyan Lawrence Cherono in a three-way sprint finish in 2:09:58 and 2:10:00. In his final race before retiring Osako was 6th in 2:10:41, the fastest-ever by a Japanese man at the Olympics by 14 seconds and tying Kentaro Nakamoto's placing at the 2012 London Olympics. Post-race he said that it is now time for the next generation to take over.
Nakamura overtook Hattori late in the race to finish 62nd in 2:22:23, saying afterward that he had had injury setbacks and difficulty with getting his training in during the pandemic. Hattori, who had also suffered injury setbacks in the last year, limped in to place73rd out of 76 finishers, stopping and walking in the home straight but running across the line. Immediately after he finished he was taken away by wheelchair to the medical area, head lolling back and to one side. It wasn't the outcome anyone could have hoped for, and hopefully there is more ahead for the talented Nakamura and Hattori.
photo © 2021 David Motozo Rubenstein, all rights reserved
text © 2021 Mika Tokairin, all rights reserved

Andrew Armiger said…
Suguru Osako was a full minute faster than he ran at the MGC Race, with the reminiscent late race side stitch in rather similar weather conditions.
August 9, 2021 at 2:16 AM

Stefan said…
Suguru Osako ran a great race. Huge props to him. I think half the struggle is to get to the start line in full or near full fitness and injury free. The rest is to perform on the day under the conditions. He did both superbly. It was a great race to watch.
August 9, 2021 at 5:21 PM