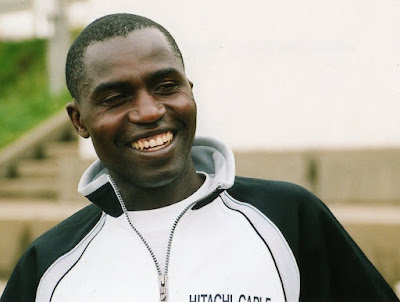 Part three in a series of republished feature interviews. Born Nov. 27, 1972 in Kisii, Kenya, Stephen Mayaka came to Japan in 1990 to run for Yamanashi Gakuin University Prep High School as the first Kenyan high school runner in Japanese history. He went on to Yamanashi Gakuin University, then the Daiei corporate team following graduation. In 1998 he changed to the Hitachi Cable team where he remained until his retirement.

In 1999 he married 1995 World Championships marathoner Sachiyo Seiyama and in 2001 the couple's first child, a daughter, was born. They later had a son. Mayaka received Japanese citizenship in 2005 and became a coach with Sozo Gakuen University's track and field team in 2006. In 2009 he became the team's head coach, then moved to his current position as head coach at Obirin University. In addition to coaching, he serves as mentor for many of the top Kenyan athletes in Japan.

In part one of JRN's interview with Mayaka, he talks about being discovered and the challenges he faced adjusting first to life in a Japanese high school and then in a university. He compares and contrasts this with the experiences of some of the top Japan-based Kenyans including Samuel Wanjiru and Martin Mathathi.

In part two of the interview he talks about life on Japan's corporate teams and the difficulties Kenyans and other foreign runners face in fitting into the shifting demands of the system.