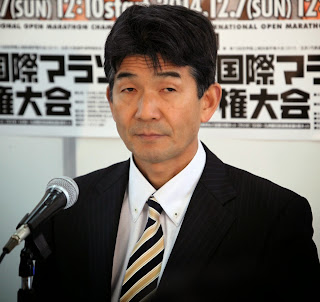 JAAF director Mitsugi Ogata, 60, spoke to the media Mar. 19 following an executive board meeting in Tokyo. Amidst widespread fears of the spread of the novel coronavirus, Ogata told reporters that April's elite track and field schedule would go ahead as planned, saying, "At the present time we plan to stage everything on schedule so as not to cause inconvenience to our athletes."

The JAAF is planning a major Tokyo Olympics test event at the new Olympic Stadium in May. Ogata indicated that this would also be held as planned, saying, "Because track and field is an outdoor event the situation is quite different from that of an indoor event. We have received advice from infectious disease experts and can ensure a reasonable degree of safety." With regard to whether the Olympic test event might be held without spectators Ogata said, "I cannot comment on that. At the present that is not something we are considering." He did, however, indicate that it would be unlikely that organizers would be able to invite international competition.

Overseas, the Mar. 20 Queensland Track Classic in which sprinter Yoshihide Kiryu, 24, and others were scheduled to compete was postponed after initially barring Japanese athletes who had not been in Australia prior to Mar. 6. Training in the U.S.A., Ryota Yamagata, 27, was also caught by the cancelation of races in which he had planned to make his all-important Olympic year season debut.

With the 2020 Olympic marathon team having just been finalized, Ogata for the first time addressed the question of what would happen to the team members in the event that the Tokyo Olympics were postponed. "The issue hasn't been discussed yet and it's ultimately up to what the division in charge thinks," he said, "but as the athletes earned their places through the three and a half year Marathon Grand Championship process I would say they have a right to their places."

The possibility of a one or two-year postponement of the Olymipcs has been floated. "If it were one year I don't think there would be an issue in relation to the current team lineup," Ogata said. "There wouldn't be any major change to their competitive abilities. Two years, however, would present difficulties. With whether the athletes on the team still possess the same level of ability, for example. I think some sort of confirmation of fitness would be necessary." As such, Ogata confirmed that although current team members would receive priority in the event of an Olympic postponement, they may be evaluated based on future race results and times in order to judge their fitness at that point.

Alongside Ogata's comments, it was learned from another official that measurement of the new 2020 Olympic marathon course in Sapporo has been moved from its original date in early April to the second half of May. This is because World Athletics officials have declined to visit Japan as a consequence of the novel coronavirus situation. The delay is not expected to have any impact on preparedness for the Olympic Games, but any prolongation of the virus' spread could create additional delays.

According to the official, there was concern that World Athletics personnel involved in course measurement might face quarantine upon returning to their home countries, which would hinder their ability to perform their other duties. For the time being the new date has been set following the expected completion of repair of winter damage to Sapporo's roads. The 2020 Olympic women's marathon is scheduled for Aug. 8, with the men's marathon set for the next day.