Ichiyama Credits Quality Training for Nagoya Success, May Only Earn Half the Bonus Paid to Men in Tokyo Last Week 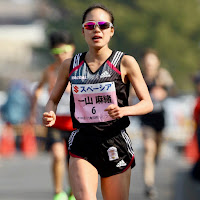 The Final Challenge Tokyo Olympics marathon qualification series ended with a Cinderella story come true. Indifferent to the cold rain falling around her, 22-year-old Mao Ichiyama (Wacoal) ran the fourth-fastest time ever by a Japanese woman, 2:20:29, to win the Nagoya Women's Marathon.

Beating the 2:21:47 that Mizuki Matsuda (Daihatsu) ran to win January's Osaka International Women's Marathon, Ichiyama was named to the final spot on the Japanese women's marathon team for this summer's Tokyo Olympics. She also broke both national record holder Mizuki Noguchi's 17-year-old record for the fastest time by a Japanese woman on Japanese soil, and the course record held by the now-suspended Eunice Kirwa, a Kenyan-born Bahraini, by nearly a minute.

Up to 30 km Ichiyama sat in the pack. "It'd be too much to say I was jogging for the first 30 km, but I was running with plenty to spare," she said. The only runner in the lead group wearing Nike's new Alphafly shoes, from just before 30 km she began to turn it on, clocking 16:14 for the 5 km from 30 to 35 km and dropping all her competition. At the time, JAAF marathon development project leader Toshihiko Seko was worried, saying, "I think she might be overdoing it here. She must be in the middle of a runner's high." But Ichiyama was so strong that she crushed all fears.

Ichyama's second half was 23 seconds faster than her first half. Over the last 2 km she looked as though she was feeling joy more than suffering, and as she kicked down the last straight she burst into tears. "I always dreamed that a day like today would come," she said. Her time of 2:20:29 was faster than since-disgraced Kenyan Rio Olympics marathon gold medalist Jemima Sumgong's 2:20:41 best. Nevertheless, her coach Tadayuki Nagayama modestly said, "Her time was within our expectations."

Osaka winner Matsuda, who was 4th at September's MGC Olympic marathon trials but moved into the provisional third spot on the team with her victory in Osaka, watched Nagoya on TV with her family. Post-race she tweeted, "It made me realize that I'm not strong enough." Her family rallied around her, saying, "Mizuki, do you really believe that? You want to waste everything by just giving up now? Keep trying! There's still something delicious out there just waiting for you to taste it!" "I'll do my best to be able to smile in front of everyone again," Matsuda tweeted. Two minutes later she added, "...but now that I say that, to be honest, it's going to take a little while."

The key that opened Ichiyama's door to the Olympics was her training. At the trials race she led at national record pace before slowing to 6th, but since then she and Nagayama developed an approach for overcoming the second half of the marathon. Based at high altitude in Albuquerque, U.S.A., one of Ichiyama's main workouts was 8x5000 m, running the first six with a pacer at 3:20/km and then running the last two alone at a faster pace. Her splits in Nagoya were almost identical. "I raced the way I trained," she said post-race. "To move up to the next level you need high-quality training. I'm going to do something cool as an Olympic marathoner."

Coach Nagayama minced no words about the situation, saying, "This is where basic chivalry comes in. You don't say you don't have the budget. You quietly pull the money together and reward the athlete for their hard work like an honorable adult. The whole Project Exceed bonus system, the MGC system, they were all really exciting and popular, so the people at the very top need to come together and have a serious talk. If they discontinue the MGC system, the marathon will die. We need both the bonus system and the MGC system to keep on working. The Olympics don't end in 2020. We need to keep doing this through 2024 and 2028 too. That's also the right thing to do."

Stefan said…
I still cannot get over how good this run was from Mao Ichiyama and the misfortune that Mizuki Matsuda had by missing out, given her incredible run at Osako. Ideally, I would love to see both run in the Olympics (should it go ahead) but that is not possible unless misfortune strikes the other 2 qualifiers which I would not want.

I am totally dismayed at the prize money issue that has eventuated and agree that something needs to be done so they are paid what they deserve. I hope those that govern Project Exceed and MGC can somehow find the funds to reward them including Yuka Ando and her coach as appropriate. It just doesn't sit well that such a great race, with such great performances and the intensive training that went before it is not adequately rewarded.
March 9, 2020 at 4:19 PM