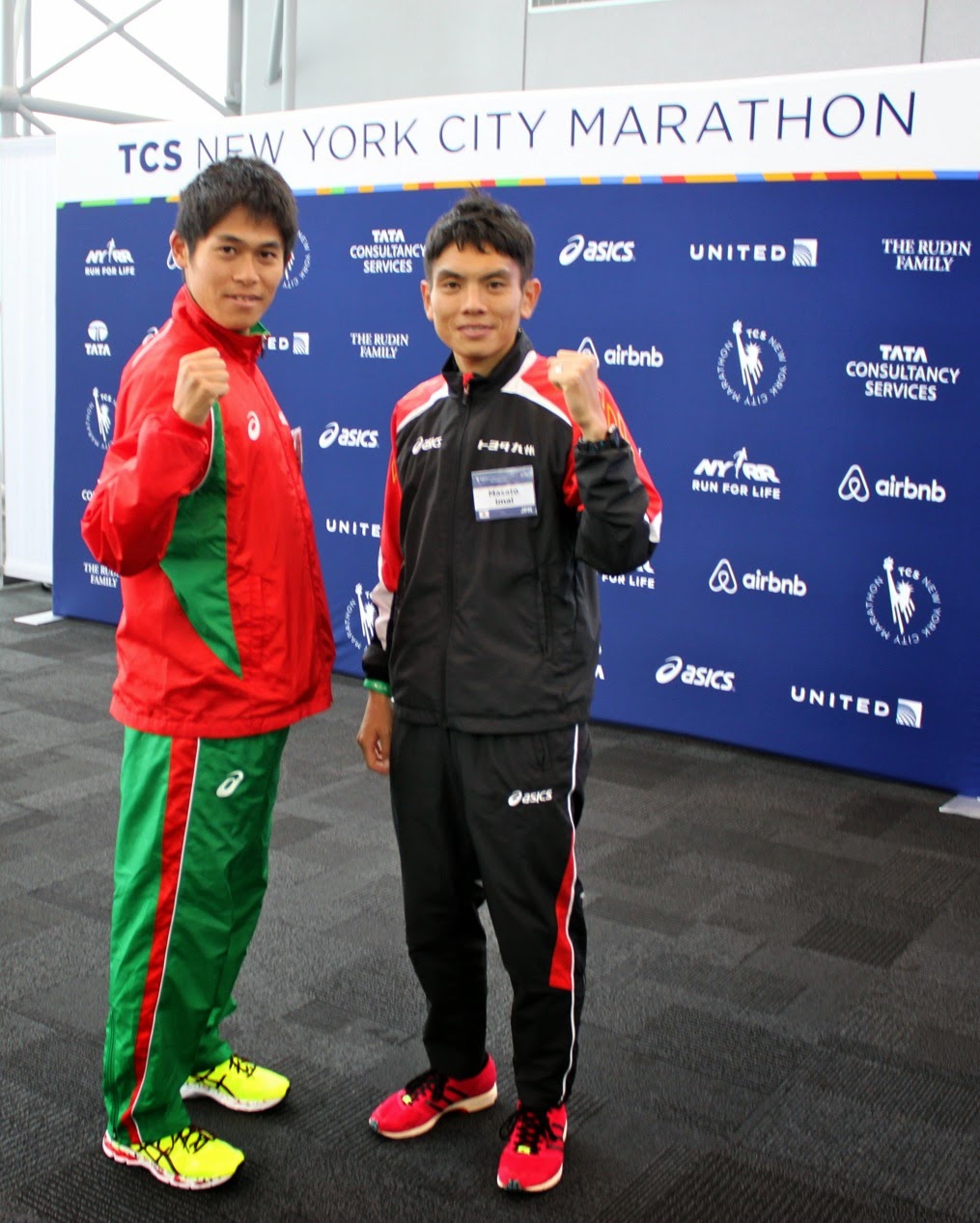 The TCS New York City Marathon is a major draw for amateur Japanese marathon tourists, but due to conflicts with the fall regional qualifiers for the year-ending national corporate ekiden championships it rarely sees top-level Japanese elites in its field.  Last year was an exception, with London Olympian Risa Shigetomo (Team Tenmaya), former Hakone Ekiden star Masato Imai (Team Toyota Kyushu) and rebel government clerk Yuki Kawauchi (Saitama Pref. Gov't) all lining up.  Shigetomo and Kawauchi ran only decently, each finishing 11th, but Imai, famous in Japan as a hill specialist, finished 6th in 2:10:45, a solid time on the NYC course and the best-ever there by a Japanese man.  This year both Imai and Kawauchi are back for more and better.

Since last year both Imai and Kawauchi were named to the JAAF's new National Team development program.  After hovering at the 2:10 level for the last three years Imai, coached by Barcelona Olympics silver medalist Koichi Morishita and a former training partner of Beijing gold medalist Samuel Wanjiru, took a step
forward with his first sub-2:10, running 2:09:30 for second at February's Beppu-Oita Mainichi Marathon.  Over the summer he was reasonably strong, winning the late-July Shibetsu Half Marathon for the second year in a row in 1:04:07, 43 seconds slower that his 2013 win.  On Sept. 9 both he and Kawauchi ran the JAAF-mandated National Team 40 km time trial, jointly dropping the rest of Japan's best men at 35 km and racing each other to the finish.  In the final kilometer Imai outkicked Kawauchi for the win, a rare sight diminished only by the fact that Kawauchi had won the City to Surf Perth Marathon just 9 days earlier.  Three weeks later the only real crack in Imai's year appeared in his final tuneup race for New York when he finished 3rd in the Fukuoka Prefecture 10-Mile Championships in 49:29, the slowest of his four times running there by nearly a minute and a half.

After going sub-2:10 twice in two weeks last December Kawauchi, returning to New York with support from JRN, has had another busy year, with five course record marathon wins, a bronze medal at October's Asian Games marathon, a 50 km national record, and a 2:09:36 at May's Hamburg Marathon to become the first Japanese man to go sub-2:10 seven times in his career.  The TCS New York City Marathon will be his tenth of thirteen planned marathons this year and his fortieth career marathon.  In accepting an offer from the New York Road Runners to come back this year Kawauchi specifically asked that they also bring Imai back, and he has set beating Imai's time from last year as his minimum goal.

Sub-2:10 marathons are uncommon in New York, with no more than two or three men running that fast there most years, and even less so for Japanese men abroad.  Of the 146 sub-2:10 marathons so far in Japanese men's history only 22 have been done on foreign soil.  The forecast for strong headwinds on Sunday don't look encouraging for fast times, putting a question mark on the joint attack on the incredible 2:05:06 course record by its holder Geoffrey Mutai (Kenya) and training partner Wilson Kipsang (Kenya) but a smile on the faces of both Imai and Kawauchi.  By career PB Kawauchi is ranked 10th in the field and Imai 15th.  By fastest performance in the last two years Kawauchi ranks 6th and Imai 10th.  By 2014 times Imai climbs to 5th with Kawauchi holding at 6th.  Both are strong on hills and undulations, and with Imai having proved himself in New York last year and Kawauchi having gone to Hamburg specifically to work out the problems he has experienced racing with jet lag both look like solid contenders for top five.  If the wind holds things back for a slower race or the later stages turn into a bloodbath from a large group of the best going at CR pace early with Kipsang and Mutai, who knows what might happen?