The Ageo City Half Marathon, Japan's major fall half marathon and, jointly with March's National University Half Marathon Championships, the deepest race at its distance in the world, delivered again in perfect conditions for its 27th running.  Every year the head coaches of most of the men's university teams bound for Japan's premier sporting event, the Jan. 2-3 Hakone Ekiden, use Ageo to narrow down their rosters to their final Hakone squad, meaning a dedicated and motivated pack of hundreds going for all they're worth and almost unimaginable results.  For the last three years the New York City Half Marathon has invited the top two Japanese collegiates in Ageo to run NYC in a relationship set up by JRN, adding an extra drive to the front end of the race.

Last year Takashi Ichida (Daito Bunka Univ.) craftily kicked his way to the win in the last few meters in a PB 1:02:36, the top five all finishing within 2 seconds of him.  Now a senior, Ichida returned to Ageo off a superb run on the National University Ekiden Championships First Stage two weeks ago to try to become the first Japanese collegiate to defend his title.  A massive pack of around 50 went out fast, going through 5 km on mid-1:01 pace with just a few meters separating them from the rest of the field. 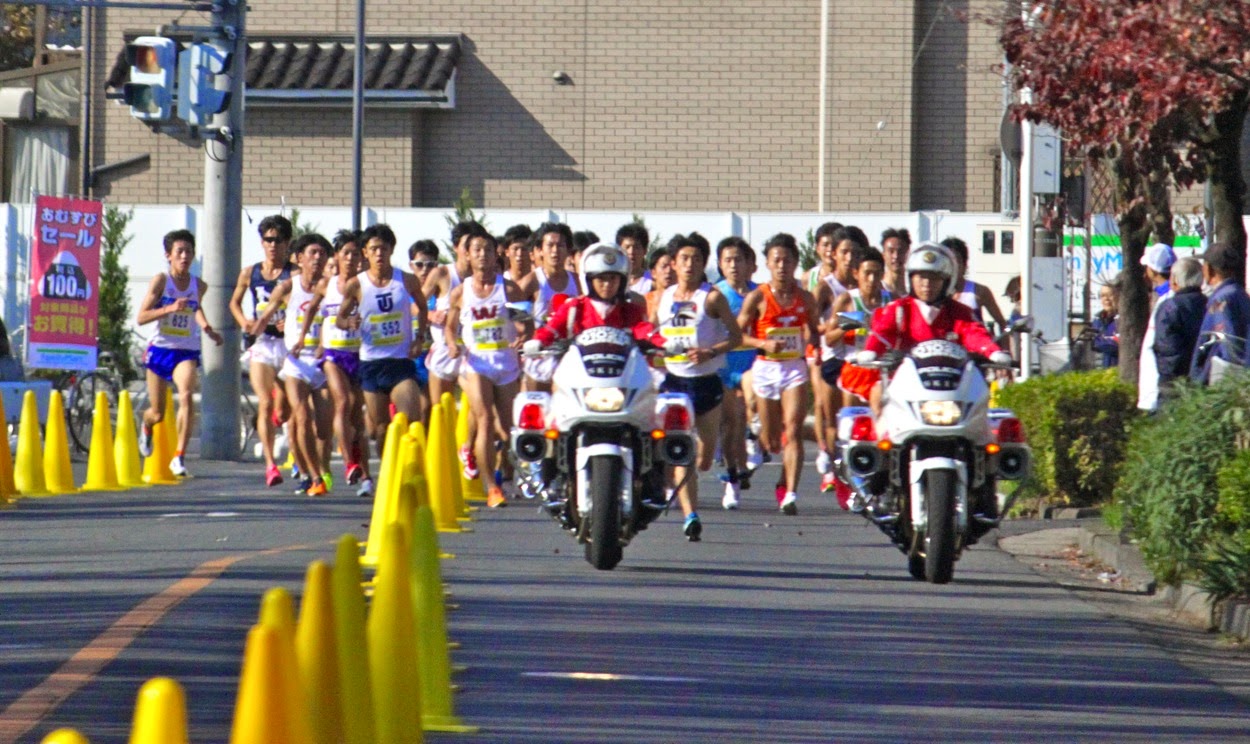 The pace stayed hot but the pack stayed together until Toyo University 1st-year Kenta Nakatani made a small move to the front on a corner near 9 km.  Ichida and his identical twin brother Hiroshi Ichida immediately responded, taking off from the rest of the field pursued by Koki Takada and Shinichiro Nakamura of Waseda University and 1st-year Naoki Kudo of 4-time defending National University Ekiden champion Komazawa University. 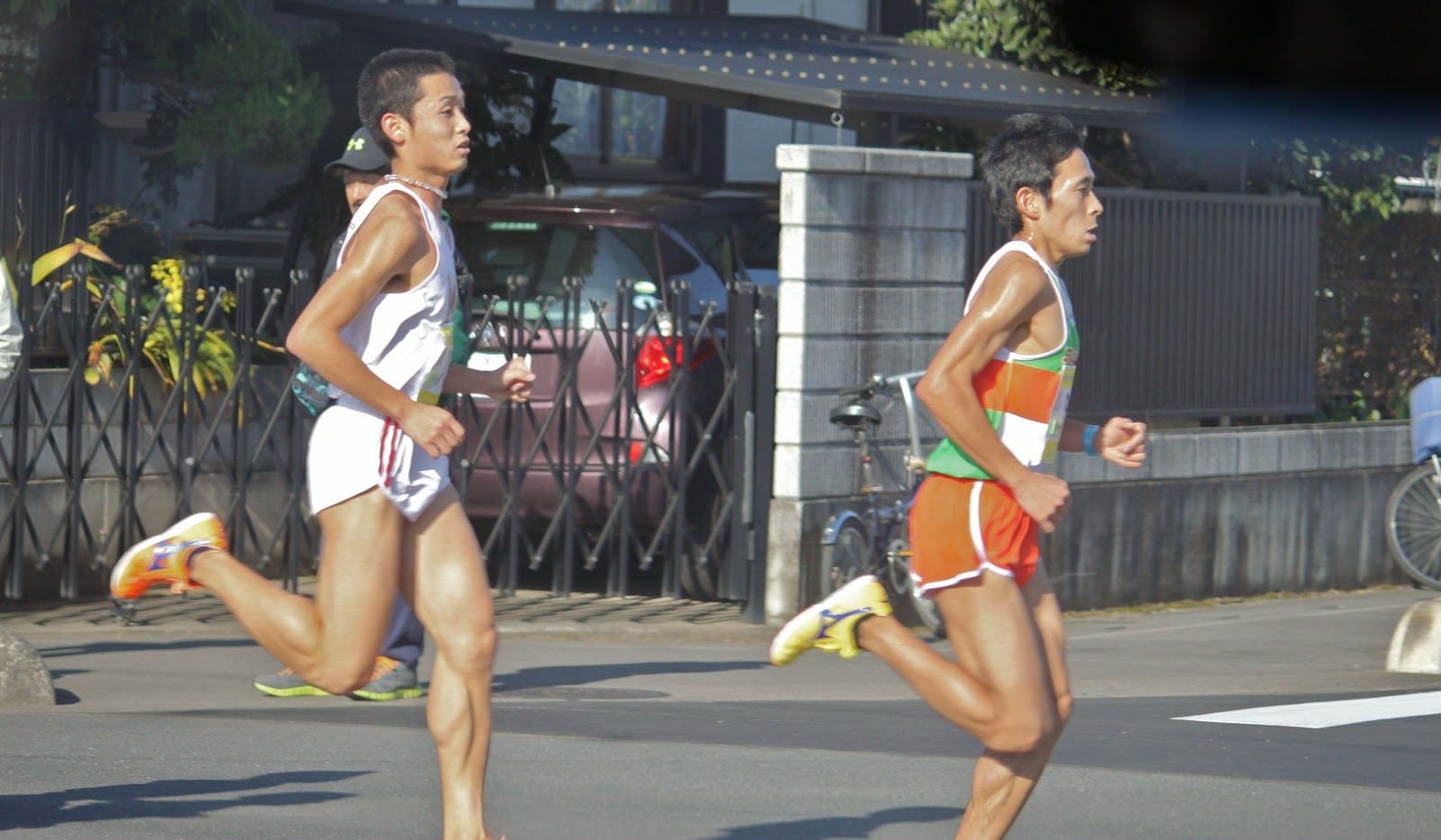 Takada, missing out on the NYC invite last year when he was the 3rd Japanese collegiate finisher by a fraction of a second, was teammates with the Ichida twins at Kagoshima Jitsugyo H.S. when K.J.H.S. won the 2010 National High School Ekiden Championships.  In that classic race Takashi Ichida ran the First Stage, Hiroshi Ichida covering the Sixth Stage and handing off to anchor Takada who ran down leader Sera H.S. to seal the win with a kick over the final 200 m.  All three now ran together again. 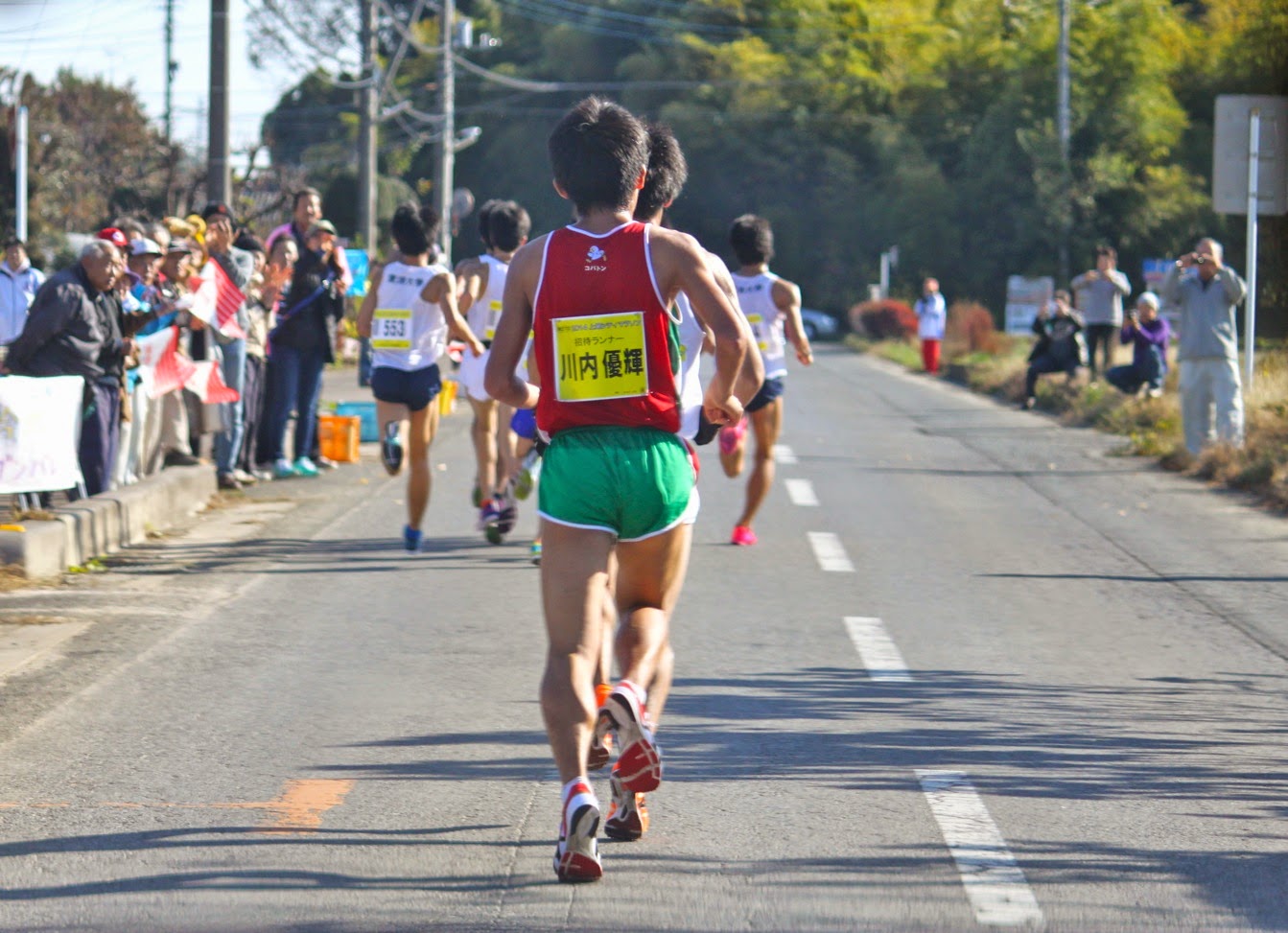 Behind them, a chase pack of around ten including Yuki Kawauchi (Saitama Pref. Gov't) and like-mined independent Hideyuki Ikegami (Kyoto Kyoiku Univ.) separated from the main group.  Hiroshi Ichida dropped off the leaders to join the second pack just as Kawauchi, who missed three days of work with a cold after returning from the New York City Marathon two weeks ago, began to slip off the back. 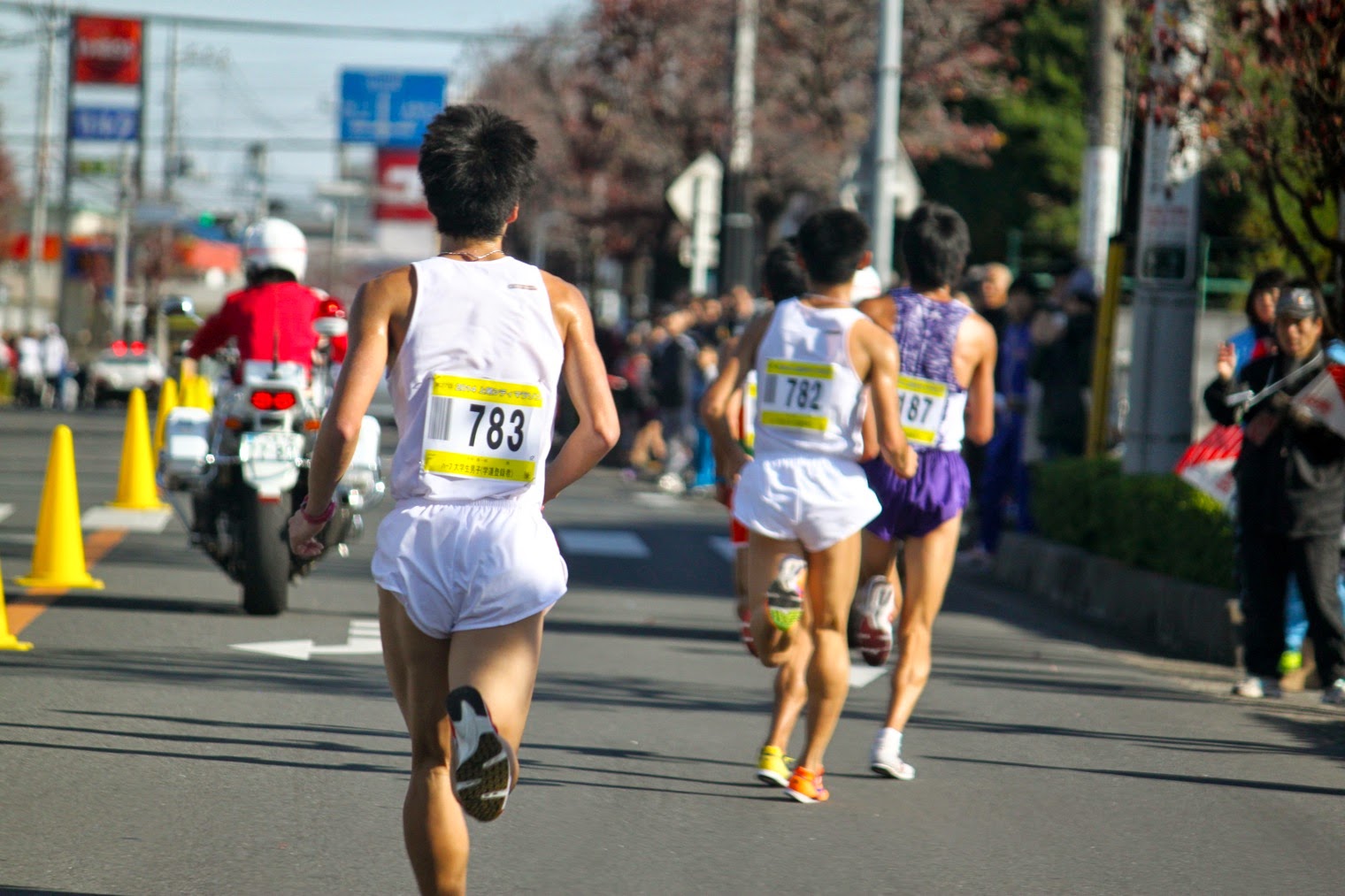 At 15 km Nakamura was the next to falter, leaving just Takashi Ichida, Takada and Kudo in contention.  All three made small moves to the front, but the decisive move didn't come until 19 km where Ichida threw in a surge that got rid of Kudo. 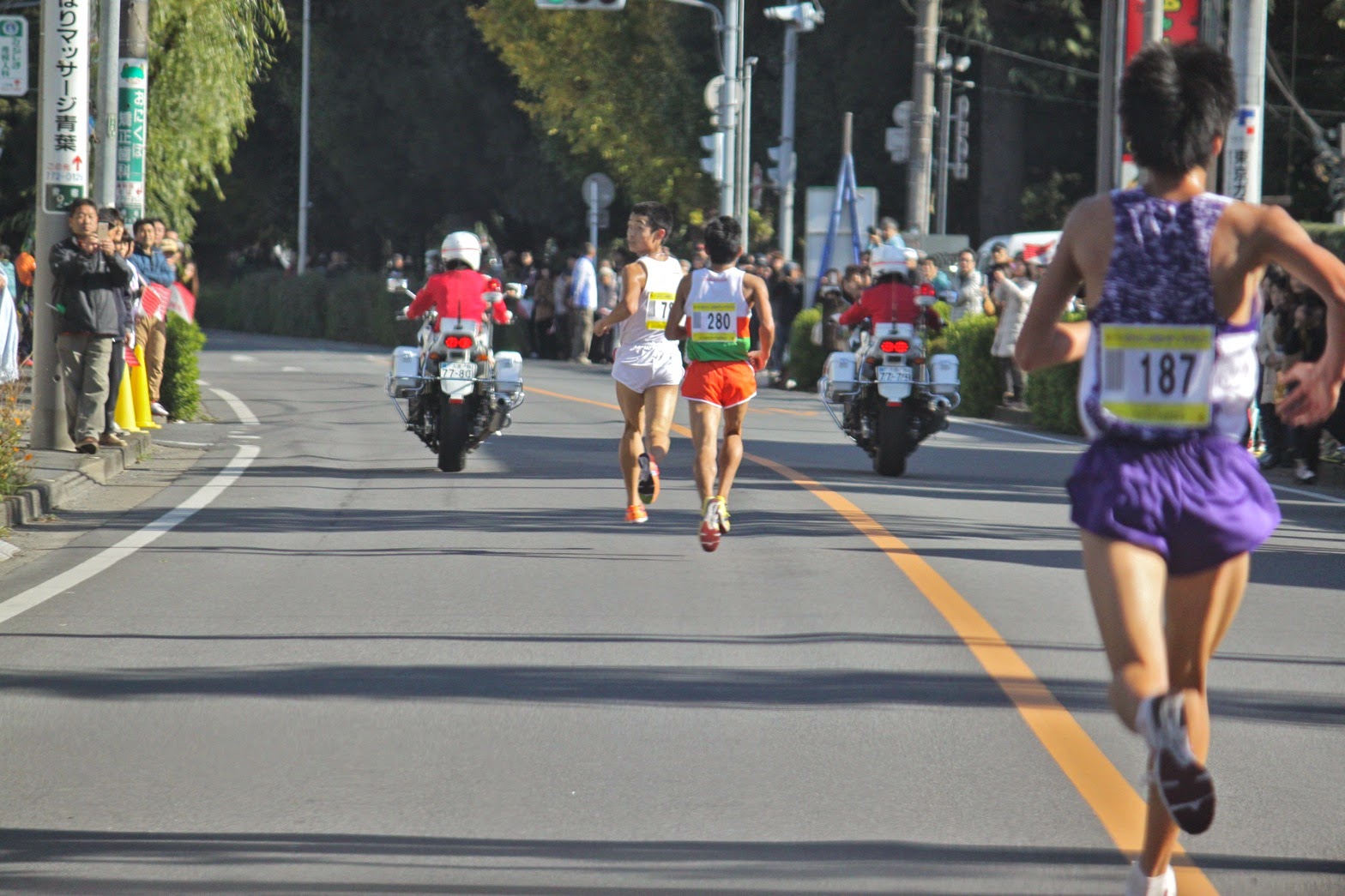 A kilometer later Takada responded with a surge of his own, but Ichida hung on to him as the pair moved into the final kilometer.  Behind them, Komazawa head coach Hiroaki Oyagi shouted to Kudo to attack, and against odds he closed on the two leaders just before the turn into the stadium for the final lap of the track. 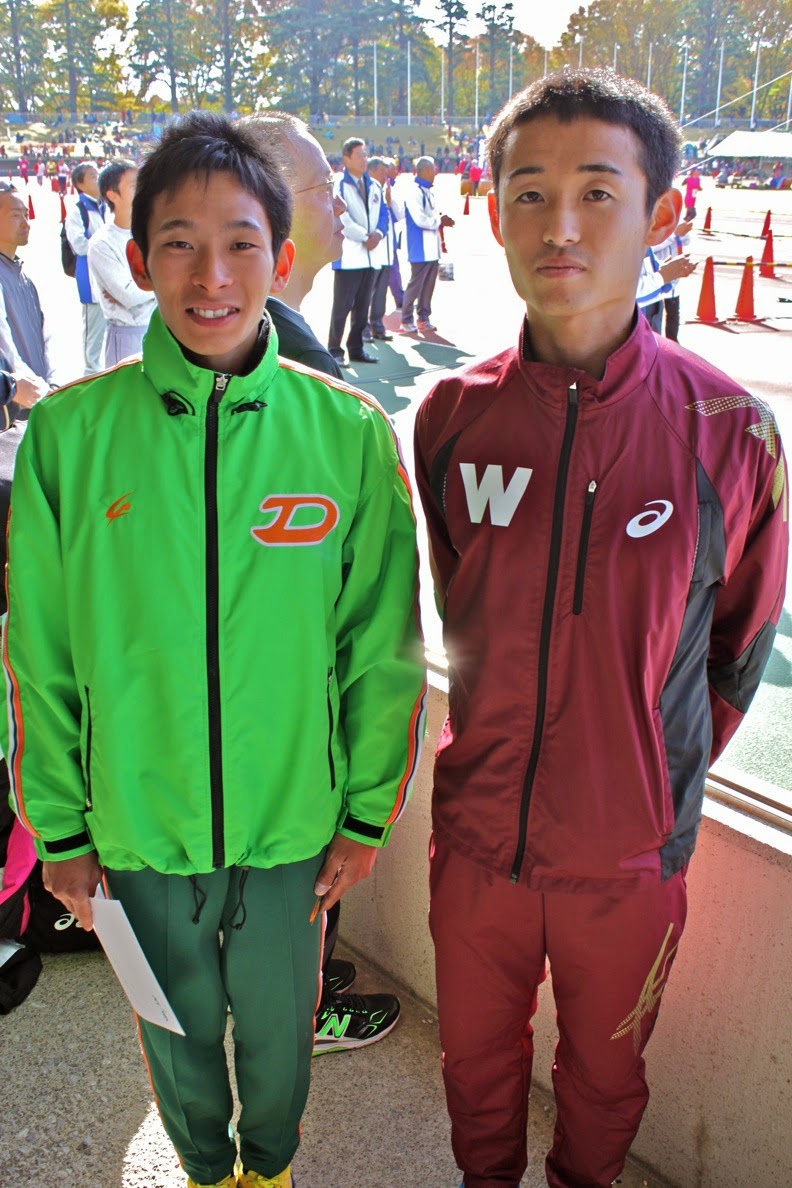 But he was too late.  Takashi Ichida surged again on the first curve, opening a gap of 10 m on Takada.  With a superb kick to his credit it looked like Ichida might pull it off, but Takada had his own kick in reserve and drove past Ichida on the back curve to win in a PB 1:02:02, the third-fastest winning time in Ageo history.  Ichida was next in 1:02:03, also a PB, meaning the former National Champion high school teammates will travel to New York together for the final race of Ichida's university career. 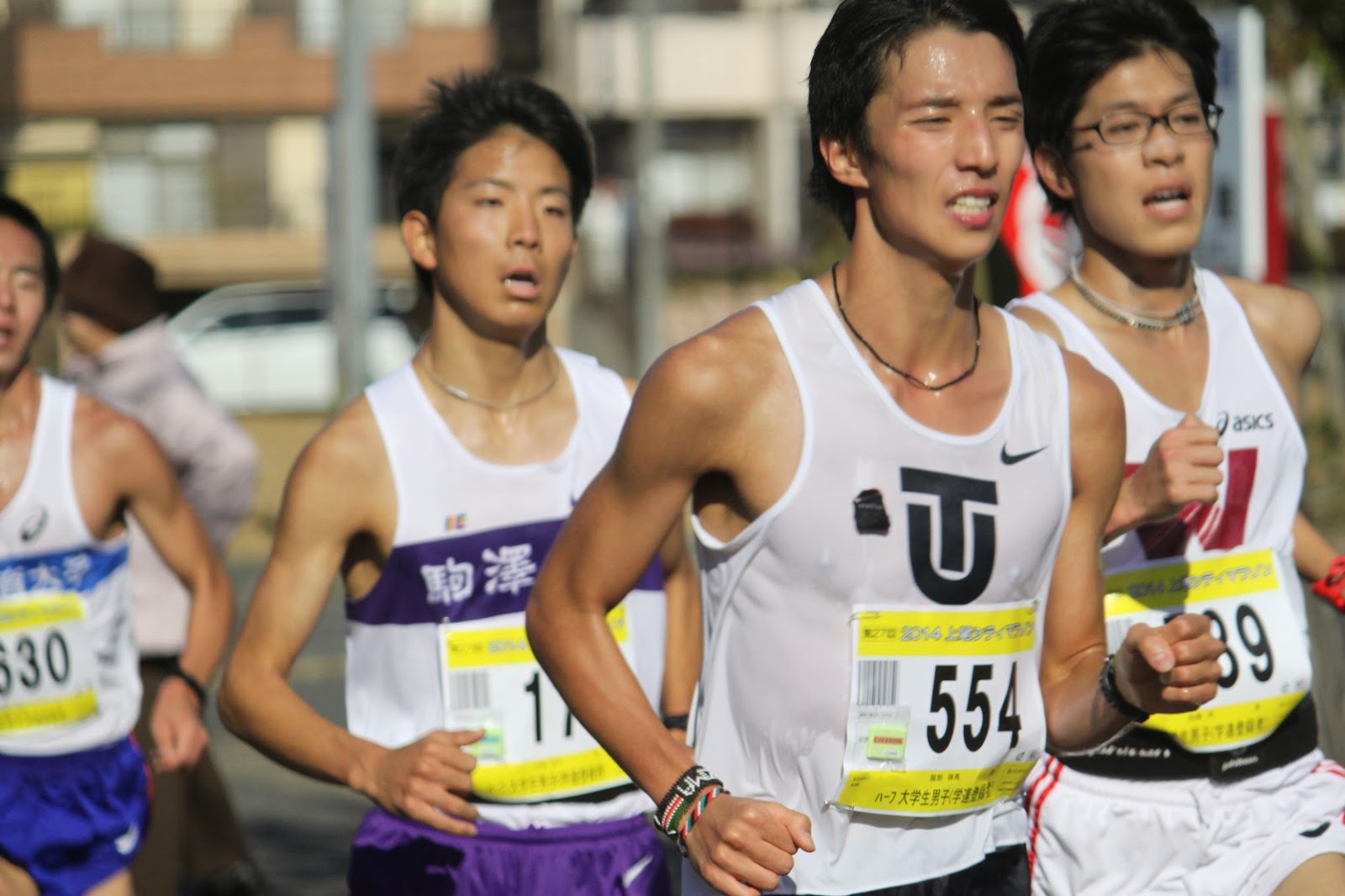 Kudo, a relative no-name who turned 19 in September, was 3rd in 1:02:18, the third-fastest time ever by a Japanese junior and better than the winning time in Ageo the last three years.  The next four runners likewise all broke Takashi Ichida's winning time from last year.  Waseda and Komazawa dominated the top ten with three runners each, broken up only by Takashi Ichida and Hazuma Hattori of 2014 Hakone Ekiden champion Toyo.  All of the top 9 ran PBs but Kudo, whose excellent time was a debut. 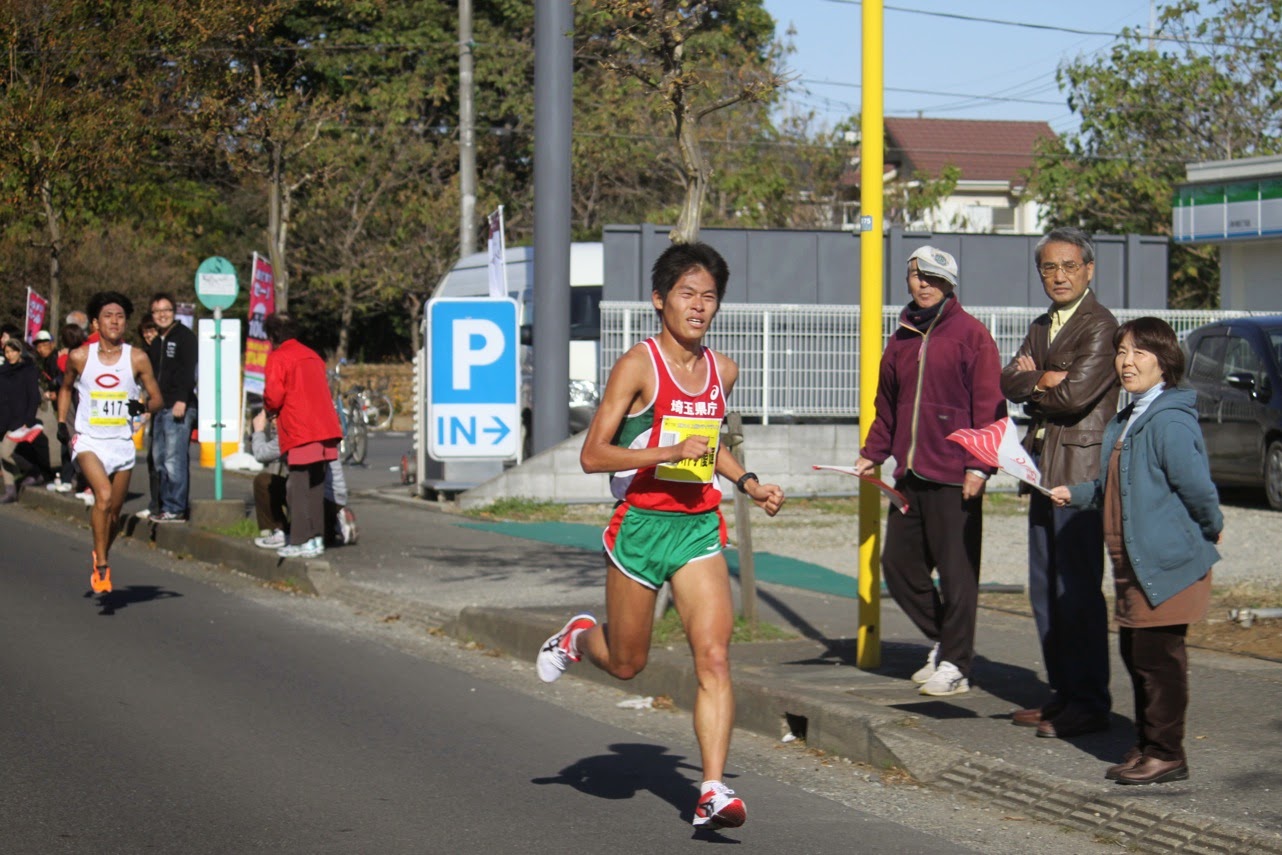 Kawauchi took 10th in 1:02:55, just the third time in his career that he has broken 1:03.  The list of PBs extended far down the field.  Overall depth was down slightly from Ageo's very best years despite the perfect conditions and hard-driving race up front but still exceeded anything found anywhere else:

Last year in Ageo Singapore's Mok Ying Ren set a men's national record to make the 2014 Copenhagen World Half Marathon.  Following his lead, Kit Ching Yiu of Hong Kong travelled to Ageo this year to go for the Hong Kong women's national record of 1:16:34.  And just got there, crossing the finish line in a 1:16:31 gun time after taking 8 seconds to get across the start line.   The pair's records show an interesting new possibility for the Ageo City Half Marathon, a small-town local race that just happens to be one of the world's great elite events, as a destination race of choice for people looking to be pulled along to their best. 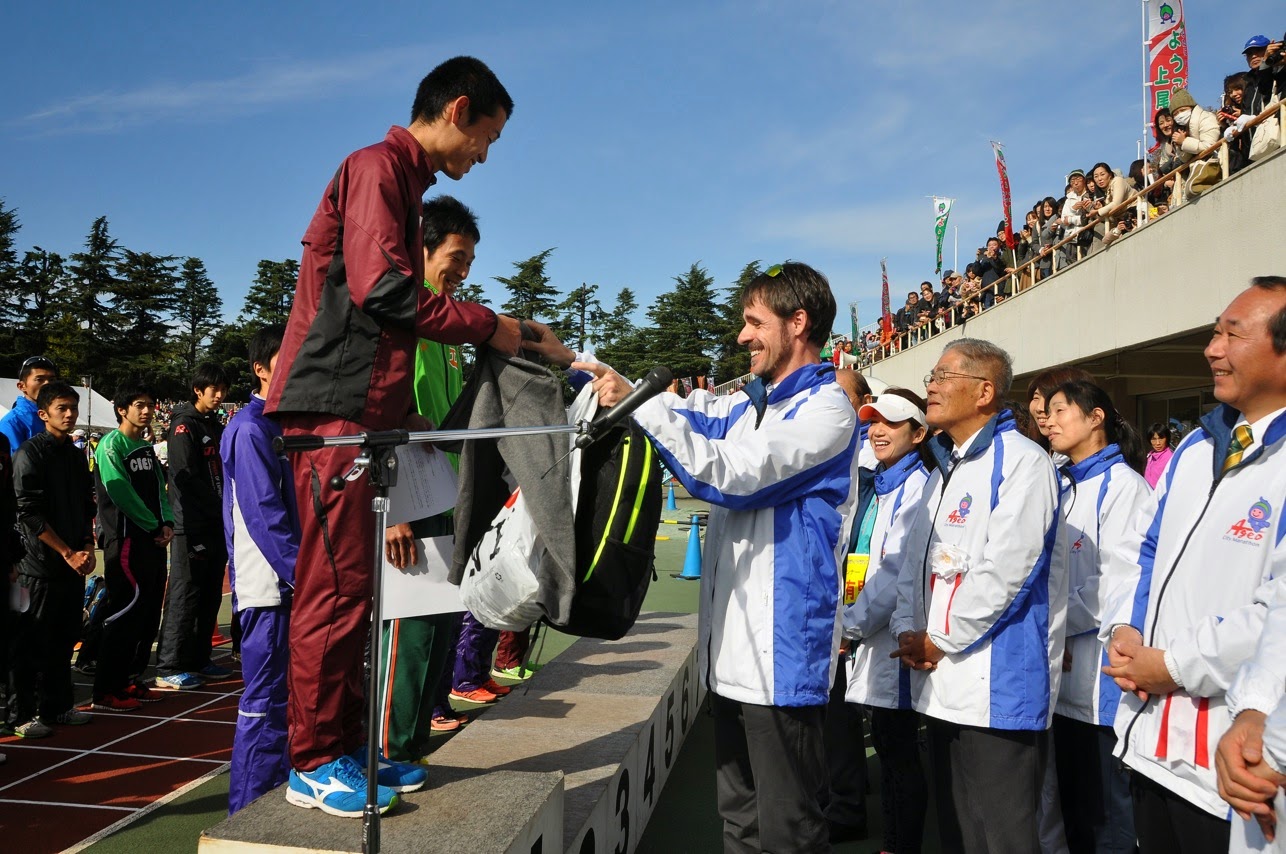 Unknown said…
So impressive videos ! Thank you for posting it. Kawauchi still in great shape.
November 16, 2014 at 8:31 PM

Unknown said…
Who is the non Japonese race official on the last photo front of Takana and Ichida ?
November 18, 2014 at 5:08 AM