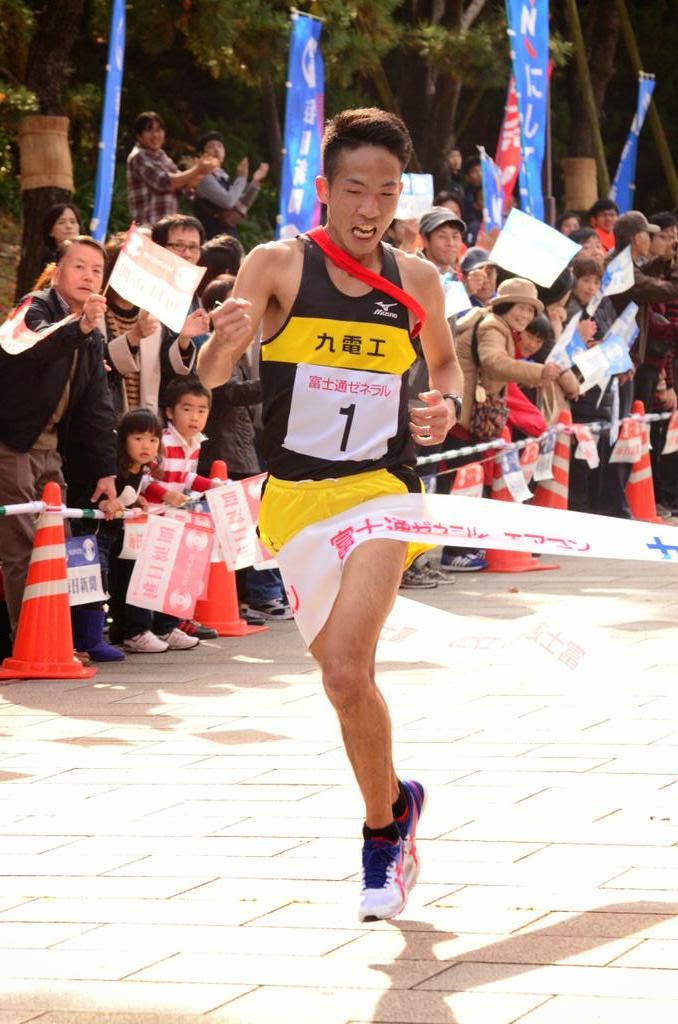 by Brett Larner
photo by akm.y

Corporate men’s qualification for the Jan. 1 New Year Ekiden national championships wrapped up Sunday with the westernmost region Kyushu Corporate Men’s Ekiden. Despite missing its top Japanese man, 2:08:00 marathoner Kazuhiro Maeda, defending champion and course record holder Kyudenko made it two in a row, taking the top spot over the seven-stage, 78.8 km course in 3:54:35 by 43 seconds over last year’s 3rd-placer Kurosaki Harima. After running almost even through the first two stages Kurosaki Harima pulled ahead and led Kyudenko until the 9.2 km Fifth Stage, when Moscow World Championships 10000 m bronze medalist Paul Tanui ran a stage best 25:24 to put Kyudenko in the lead for good.

Yasukawa Denki, featuring Moscow World Championships marathon 5th placer Kentaro Nakamoto, was another 40 seconds back, anchor Bunta Kuroki running down Barcelona Olympics marathon silver medalist Koichi Morishita-coached Toyota Kyushu anchor Kento Otsu to give Yasukawa Denki 3rd by 2 seconds. The too-proudly all-Japanese 2012 Kyushu champion Asahi Kasei team headed by JAAF men’s marathoning director Takeshi Soh was a shambles, all but one of its runners finishing 4th or lower on their stages and the team finishing only 5th overall. With six places at the New Year Ekiden up for grabs for the seven quality teams in the region the battle for 6th was a good one, with the Mitsubishi Juko Nagasaki team led by 2014 Asian Games marathon silver medalist Kohei Matsumura going back and forth with the Nishitetsu team all day before just holding them off by 10 seconds to pick up the last ticket.

The 6 teams from the Kyushu region join the 31 teams from the corporate league’s other 5 regions who have already qualified for the New Year Ekiden. In the most competitive region, Tokyo-centric East Japan, two-time New Year Ekiden winner Konica Minolta, running with all of its big guns except track and half marathon star Tsuyoshi Ugachi, beat 2012 New Year Ekiden winner Nissin Shokuhin who were likewise absent #1 man Yuki Sato. The other big news came down at the bottom of the field, where tiny Nanyo City Hall beat Kanebo, formerly one of the best teams in the country, for the thirteenth and final New Year Ekiden spot available to East Japan teams.

In the Chubu Region, seven quality teams competed for seven places at the New Year Ekiden, illustrating the partial futility of the regional qualification system.  The best of them, Toyota, won easily, taking five of the seven stage bests in spite of splitting its roster into two squads with most of its best men on the A team.  The Toyota A men scored the fastest average pace of any of the 37 teams in the 6 corporate regional qualifiers by over 3 seconds per kilometer, an indication of how much the other teams will have to step up their game come Jan. 1.  Toyota anchor Shinobu Kubota, a 2014 graduate of 4-time National University Ekiden champion Komazawa University, won the 13.1 km anchor stage by nearly a minute and a half.  Toyota's B team finished 3rd overall without counting toward New Year qualification, meaning extra depth that majorly improves Toyota's chances of breaking East Japan's hold on the national title.

The tiny Hokuriku Region held its regional qualifier concurrently with Chubu, its teams competing alongside the bigger region's but scored separately.  The YKK team, the only true national-quality team in the region, has a perpetual lock on New Year Ekiden qualification and made it again with ease, but in the race for the second spot last year's Hokuriku 4th-placer Omokawa Lumber, which this year recruited the late-career but still-strong Norio Kamijo, pulled off a surprise and outran both of the region's other two teams, Sekino Reform and the Takada SDF Base, to take 2nd.

In the foreigner-free Kansai Region, last year's winner SGH Group fell to 4th out of the five teams to qualify, only London Olympics marathoner Ryo Yamamoto and anchor Takayasu Hashizume running up to potential with stage wins.  In its place last year's 2nd-placer Otsuka Seiyaku came out on top of a very close race, beating the still-developing new Sumitomo Denko team by just 8 seconds over 80.45 km as rookie anchor Yudai Yamakawa overtook Sumitomo's Noritaka Fujiyama, another Komazawa graduate, with NTT Nishi Nihon another 8 seconds back.

The Chugoku Region, another with an equal number of quality teams and New Year Ekiden spots, saw the dominant Chugoku Denryoku team win again for the millionth straight year, over two minutes ahead of runner-up Mazda with an all-Japanese lineup.  The biggest news came on the anchor stage, where Chugoku Denryoku's likable Takehiro Deki, an enigmatic ekiden star while at Aoyama Gakuin University who ran a 2:10:02 marathon his junior year without specific training and has struggled ever since, ran a 38:05 stage record on the 13.0 km anchor stage.  If Deki is back to full strength Chugoku Denryoku's chances of improving on last year's 5th-place New Year Ekiden finish will be very good indeed.  Look for a full New Year Ekiden preview next month closer to race date, and follow @JRNLive for the only live English-language coverage of the event that justifies the existence of Japan's corporate running league.