Monday's Izumo Ekiden saw the top ten schools from the 2016 Hakone Ekiden get their 2016-17 season started.  For the rest of the universities in the Tokyo area, Saturday's Hakone Ekiden Yosenkai is their gateway to the biggest race of the year.

A 20 km road race, the Yosenkai is the official qualifier for the Hakone Ekiden, the Jan. 2-3 road relay that is a cultural institution in Japan featuring twenty Tokyo-area university teams and one select team.  The top ten finishers in Hakone are seeded for the following year, freeing them up to run Izumo.  The rest line up again at the Yosenkai with all the other Hakone hopefuls, where they field teams of ten to twelve men.  The times of their first ten finishers are combined, and the ten schools with the fastest aggregate times make the Hakone cut.  Ten of the fastest individuals at the Yosenkai whose teams don't make it are chosen for the select team.

Like Hakone itself, the Yosenkai is broadcast live, and the atmosphere in Tokyo's Showa Kinen Park is alive with energy before, during and after the race. Marching bands and cheerleader squads from each university line the course around the start area and 5 km first loop, and all around the park crowds of students, alumni and fans wave banners with the school colors and cheer their runners on enthusiastically.  The announcement ceremony for the ten qualifying schools is one of the most dramatic moments of the season. Taken all together, the Yosenkai is the biggest, most competitive 20 km in the world.

Highlights from the 2015 Hakone Ekiden Yosenkai.

This year fifty universities will field teams at the Yosenkai, each lining up single-file by PB for the mass start.  All ten of the 12th-21st place teams at the last Hakone return, with a few more schools close to making the bottom end of the field.  The top fifteen-ranked teams in the field by average half marathon PB are listed below.  In some cases individual times are extrapolated from 20 km performances or IAAF scoring tables.  Click to enlarge. 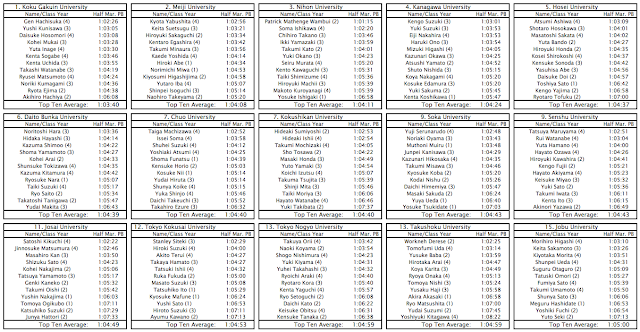 After not even qualifying for Hakone last year, Koku Gakuin University looks like the favorite for the overall win with a margin of almost 30 seconds per runner over the next-best team.  You might remember Koku Gakuin for this scene from a few years back when it was trying to finish within Hakone's seeded bracket for the first time.

In a rebuilding phase after heavy losses to graduation in recent years, Hakone 15th-placer Meiji University is Koku Gakuin's closest competiton.  Last year's Yosenkai winner and 12th at Hakone this year, Nihon University is also close behind as it sees star runner Patrick Wambui, undefeated in his last seven races on the track and roads, making his debut over the longer distances.  Hakone 14th-placer Kanagawa University is comfortably positioned at 4th to re-qualify.  From there things get interesting.

5th through 10th are ranked within a relatively tight range of 6 seconds per runner.  With ten runners that's a one-minute range overall, but expect most of the group containing Hosei University, Daito Bunka University, Chuo University in its debut under new head coach Masakazu Fujiwara, Kokushikan University, Soka University and Senshu University to be close together throughout the race.  Soka, going for its second Hakone appearance, and Senshu, trying to return for the first time since 2014, have a 6 second per runner margin over 11th-ranked Josai University.  The line between 10th and 11th is the critical one that decides who runs Hakone and who watches from the side of the road, and the margin is close enough that it should be exciting.

12th-ranked Tokyo Kokusai University, which made its Hakone debut in 2016 in just its fifth year of existence as a program, is 4 seconds per runner behind Josai and will need a combination of a perfect day and a higher-ranked team blowing up to bridge the 10 second per runner gap to Hakone.  6~7 seconds per runner behind Tokyo Kokusai, Tokyo Nogyo University, Takushoku University and likable underdog Jobu University, feeling the resignation of head coach Katsuhiko Hanada this spring, will need a miracle to make the cut.

Last year Kokushikan was 11th behind Jobu, missing Hakone by 10 seconds. One second per runner over 20 km.  With at least four schools in contention for the last two spots at Hakone this year's Yosenkai should be even more dramatic.  JRN will be on-site to cover the race as it happens.

Eryn said…
The Yosenkai is one of the best race to witness: early on the tarmac of the military base, you can witness the amazing departure with 50 teams lining up, with all their cheering teams and flags. Then you can run to the 15k point to see the leaders, then you can try to find a spot near the arrival to witness the best 20K finish in the world.

We had a couple of years ago a runner from our club, Namban Rengo, Christian Sommer, running for Todai Graduate school. It was amazing for him and for us to follow him. We waited for him near the finish line at 17-18k point. Great support from all alumni and the public ! He finished strong and then went on to worked during the actual Hakone Ekiden as a marshall (i think).

Then you rush to the large open space where the top 10 finishers will be announced. Teams are spread across the filed, some feeling great about their chances, some doubting, some still expecting a miracle, some already aware of these defeat (and coaches shouting on crying runners is not a pleasant sight). The final top 10 disclosure is full of suspense even if you tried to count runners near the finish line.