This weekend saw Japan's two biggest 20 km road races go down back to back in Tokyo.  Saturday in  Showa Kinen Park fifty Tokyo-area university men's teams lined up at the Hakone Ekiden Yosenkai to try to claim one of the ten remaining places at January's ultra-prestigious Hakone Ekiden.  With at least six Kenyans, one Ethiopian and one Taiwanese runner on the starting line it may have been a record for international participation in the Yosenkai, the official qualification race for Hakone, and it was the internationals who pushed the front end of the field to fast times despite conditions made unseasonably warm by the bright and cloudless skies.

Undefeated in his last seven races on the track and road, Patrick Mathenge Wambui (Nihon Univ.) was the heavy favorite despite his inexperience at such a long distance, but he received a serious challenge from newcomer Josphat Ledama Kisaisa (Obirin Univ.).  Arriving in Japan earlier this fall to run under the coaching of Stephen Mayaka at Obirin, Kisaisa was on the attack early.  Pushing the first 5 km to 14:23 and keeping it almost even with 14:29 and 14:32 splits for the next two 5 km sections, Kisaisa progressively burned both off his international competition and the only four Japanese men to try to roll with him until only Wambui was left.  After 15 km Kisaisa began to fade, and biding his time for a long surge Wambui had no trouble pulling away for the win in a solid 58:15.  Kisaisa was 2nd in 58:27, one of the better Yosenkai debuts by a first-year. 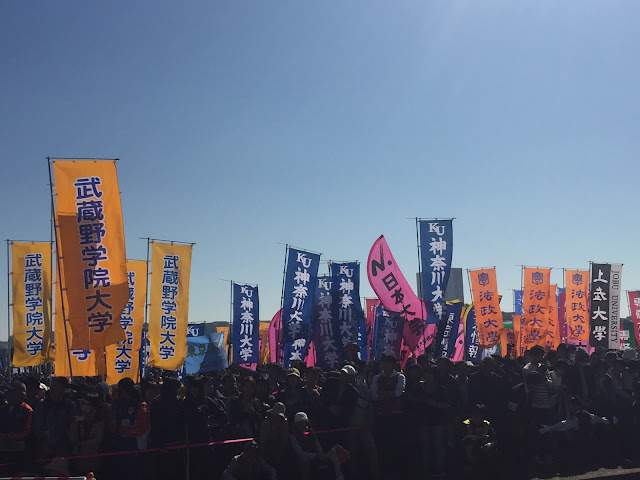 Kengo Suzuki (Kanagawa Univ.) was the last Japanese man standing up front, teaming up with another Kenyan first-year, Muthoni Muiru (Soka University) when the leading pace proved too hot.  The pair worked together to reel in Workneh Deresse (Takushoku Univ.) after halfway, then set their sights on Simon Kariuki (Nihon Yakka Univ.).  With 2 km to go Suzuki surged to drop Muiru, running down Kariuki for 3rd in 58:43, the third-fastest time ever by a Japanese man at the Yosenkai.  Muiru also overtook Kariuki to claim 4th in 58:51, the first time four men have broken 59 minutes at the Yosenkai.  Altogether ten men cleared the hour mark, putting it near the top of the race's better years.

At the Yosenkai times matter more than places, with each university's ten fastest finishers adding to its overall time and the ten top schools on aggregate time going on to Hakone.  Ranked just 6th pre-race Daito Bunka University was the first one to put ten men past each of the checkpoints along the course, but up against schools with a super-fast star up front that was no guarantee.  Everything depended on final finishing times, and with a record 87-year streak of making Hakone at stake nobody felt that more than Chuo University after its star runner Taiga Machizawa fell off the lead group and slowed dramatically over the second half of the race.  The announcement ceremony, always tense, was more dramatic than ever. 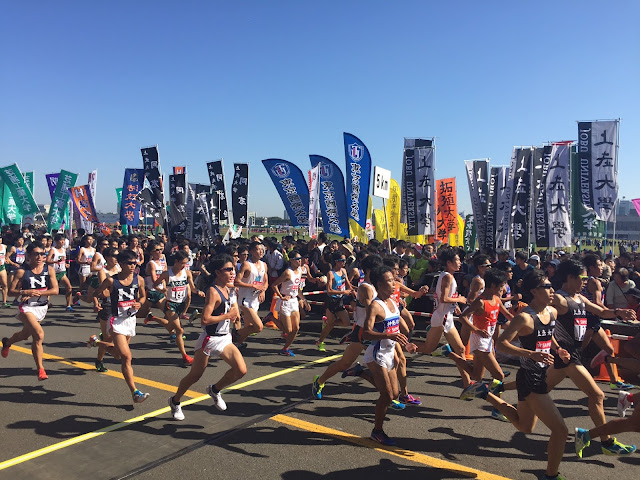 With third-year Noritoshi Hara making an unexpected breakthrough to the sub-60 level with a 59:44 for 9th overall and its first ten finishers all breaking 1:01:15 Daito Bunka won the team competition in 10:08:07.  Its tenth scorer was first-year Ryosuke Nara, the son of head coach Osamu Nara.  Meiji University lived up to its #2 ranking, 2nd just behind Daito Bunka with a time of 10:10:09.  Muiru's strong debut powered Soka University to 3rd overall in 10:10:09 for just its second-ever Hakone appearance.  Soka's 11th runner ran 1:02:05, meaning that without Muiru the team would have totalled 10:13:23 for 7th, just ahead of its pre-race #9 ranking.  Soka still would have made the Hakone cut, but a 3rd place generated buzz that just squeaking through wouldn't have.

Similarly, last year Tokyo Kokusai University qualified for Hakone for the first time in just its fifth year as a program.  This year it ran Kenyan first-year Titus Mogusu, who dropped out after 15 km.  Without him, Tokyo Kokusai was 15th, not enough for a return to Hakone.  In the case of last year's Yosenkai winner Nihon University, Wambui's time meant everything.  Nihon's 11th runner finished in 1:04:08, a difference of 5:53 from Wambui's winning time.  An extra 5:53 would have put Nihon outside the circle at 13th; considering the profound cachet of the Hakone Ekiden and the impact that making it can have on a university's name value, enrollment, and alumni relations it's pretty clear just how valuable having good African athletes like Muiru or Wambui can be to a Japanese university.

Chuo gave even more evidence.  In its first season under new head coach, Chuo alum and 2:08:12 marathoner Masakazu Fujiwara, Chuo was the 9th school to put its top ten across the finish line, but with Machizawa running only 1:00:05 its runners and staff were sweating it out through the announcement ceremony, 87 years of history weighing heavier and heavier on them as the countdown went on.  1st, 2nd, 3rd, then 4th, 5th, 6th, 7th, 8th and 9th all bringing cheers as relatively minor schools made the grade.  A long pause before 10th, and when Nihon's name was announced an era had come to an end.  Chuo was 11th, 44 seconds behind Nihon on aggregate time, a little over 4 seconds per runner over 20 km.  If Machizawa had held on to his first half pace and finished around 59-flat Chuo would have made it.  If Nihon hadn't had Wambui and the race had otherwise played out the same way, Chuo would have made it.  For that matter, if Wambui had been only a decent athlete like Deresse or Kariuki, Chuo would have made it.  If Chuo had an African team member they probably would have made it.  Nothing but ifs, but one thing was clear: Wambui's presence at Nihon meant the difference between Nihon's fate and Chuo's and all that is going to come down as a result.

The next day Japan's other big 20 km got off on a unique 5 km loop in Tokyo's Takashimadaira neighborhood at the Takashimadaira Road Race.  Always a mid-season time trial for schools already qualified for Hakone plus Yosenkai school second-stringers and a few random turners-up, this year saw 2013 and 2014 winner Benjamin Ngandu (Team Monteroza) lead Rio Olympian Kazuya Shiojiri and other Juntendo University runners, Yuki Kawauchi (Saitama Pref. Gov't) and more collegiate competition from Tokai University, Teikyo University and elsewhere to the deepest finish in Takashimadaira's 41-year history.

From the start it was all Ngandu and Shiojiri, the pair splitting 14:33 and 14:37 for the first two 5 km laps.  On the third lap Shiojiri, who ran the 3000 mSC in Rio and whose unexpected appearance in Takashimadaira left fans and amateur runners in the race alike very pleased to say the least, slowed, taking 15:00 to Ngandu's 14:48.  From there the two were never challenged, Ngandu winning for the third time in 59:17 and Shiojiri taking 2nd in 59:36, a PB by 2 seconds.  Defending champ Kawauchi, in preparation for next month's Porto Marathon, took 3rd in 59:43, well over a minute faster than his winning time last year.  Shiojiri's Juntendo teammate Takuya Nishizawa and independent Aritaka Kajiwara also cleared 60 minutes to make to make five under the hour mark, the most-ever on the Takashimadaira course.