University men's ekiden season kicks off Monday, October 10 with the first of the Big Three University Ekidens, the 28th running of the Izumo Ekiden.  A week out from the race organizers released the entry lists for the 21-team field, 10 universities from the Tokyo-centric Kanto Region, 6 from other parts of Japan, 4 regional select teams and, for the 19th year, the Ivy League Select Team from the U.S.A., the last vestige of the international ekiden in Japan. 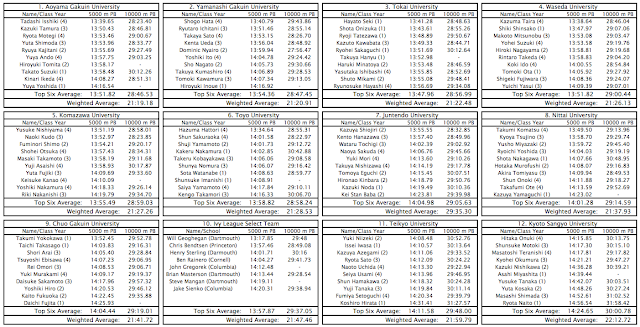 The top 12-ranked teams at this year's Izumo Ekiden.  Click to enlarge.

Last year Aoyama Gakuin University did the incredible, breaking the 6-stage, 45.1 km Izumo course record despite a 600 m addition to the Third Stage.  With the graduation of four key seniors including Third Stage winner Kazuma Kubota AGU is down slightly on strength this year, but only slightly.  With 13 men on his roster having 5000 m bests under 14 minutes, half having also gone under 29 for 10000 m, head coach Susumu Hara has plenty to work with.  His two top men Tadashi Isshiki and Yuta Shimoda have both run 5000 m PBs since their 2:11 marathon debuts in Tokyo in February.

In last year's pre-race rankings AGU had a 4-second advantage per runner over Yamanashi Gakuin University, a margin that they translated into a 38-second win despite a brilliant anchor run from YGU first-year Kenyan anchor Dominic Nyairo.  Since then Nyairo has run PBs of 27:56.47 for 10000 m and 1:00:50 for the half marathon and the rest of the YGU team has likewise come up in quality, cutting AGU's advantage per runner down to around a second and a half.  YGU lacks AGU's depth, but if their top six all run 100% they could pull it off this year.

Tokai University was only 5th last year, but in head coach Hayashi Morozumi's fifth year they have transformed into something special.  Equalling AGU on 10000 m credentials they've gone one better over 5000 m, with 14 men on the Tokai roster having cleared 14 minutes as of last weekend.  Their chances in Izumo are hurt slightly by the absence of Tokai's best 10000 m man, 28:30.76 senior Yuki Hirota, and by the large number of first-years Morozumi plans to run, but on paper Tokai is very nearly the equal of both AGU and YGU, promising a three-way race up front for the win.

A short way back is the next trio made up of the last three schools to win before AGU, 2013 CR setter Komazawa University, 2011 winner Toyo University and 2010 CR setter Waseda University.  Waseda is the only school ranked in the top ten to be fielding its best possible team, Komazawa missing last year's First Stage winner Keisuke Nakatani with an injury and Toyo's Fourth Stage winner Ryo Kuchimachi likewise out with injury.  The 3 schools are as close together as the top-ranked trio but come in with a deficit of about 5 seconds per runner that they will need to overcome to have a shot at making the 3-deep seeded bracket for 2017.

Some way back are Juntendo University, led by Rio Olympics steepler Kazuya Shiojiri, and Nittai University, hurt by the absence of its top 10000 m runner Masaya Komachi.  Chuo Gakuin University and the Ivy League Select Team are close together in 9th and 10th, the Ivies hoping to get into the single digits and fielding Dartmouth's Will Geoghegan, his 13:17.85 best for 5000 m the best in the field by more than 15 seconds and helping give the Ivies the 6th-best 5000 m average in the field.  In its 25th time making Izumo, surprisingly more than any other school, 12th-ranked Kyoto Sangyo University is the top university from outside Kanto, hoping to pick off the back end of the best for a rare top 10 placing.

The Izumo Ekiden will be broadcast live nationwide on Monday, October 10 on Fuji TV beginning at 1:00 p.m. local time.  Although there is no official live stream as far as we are aware, there are online services that make it possible to watch Japanese TV online.  JRN will also be live tweeting the race on the @JRNLive feed.