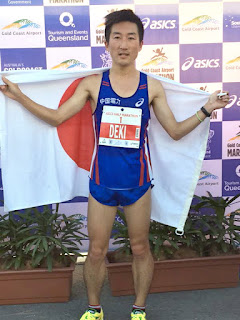 It was a big day for records at Australia's Gold Coast Airport Marathon, high-quality fields and the relative absence of the Gold Coast's infamous winds combining for a day to remember.  Japan's Takehiro Deki (Team Chugoku Denryoku) got things started in the men's half marathon, running alone after just 7 km to drop a 1:02:11 PB for the win, the 5th-fastest winning time in the event's 32-year history.  A very likeable former Hakone Ekiden star who as a complete unknown in college ran a 58:51 CR at the Takashimadaira 20 km and a 2:10:02 marathon debut without specific marathon training his junior year, Deki helped set Aoyama Gakuin University on the road to its course-record Hakone Ekiden win this year.

"It was a little tough being out there on my own," he said post-race, "but I ran the way I wanted. This was a big step toward making the Rio Olympics team in the marathon."  Deki's coach Yasushi Sakaguchi, who previously coached 2:07 marathoners Atsushi Sato and Shigeru Aburuya and Helsinki World Championships bronze medalist Tsuyoshi Ogata, told JRN, "Deki has been in a slump ever since that marathon debut, but he's obviously on the way back up now.  He's a very interesting athlete.  He has got short legs, a big head, funny arm carriage, but he can run.  He is going to run 2:06."

Australia's Eloise Wellings, winner of this year's Marugame Half Marathon, likewise turned in a solid PB performance for the win, cutting more than 30 seconds off her best as she outran the U.S.A.'s Sara Hall for the win in 1:10:10.  Hall also broke her best, just, in 1:10:49, with 3rd-place Cassie Fien (Australia) also turning in a best of 1:11:28.  Japan's Yuka Koga took 5th in a best of 1:13:35.  Diagnosed with cervical cancer last November, Remi Nakazato made a great comeback with a 1:14:11 for 8th.

The men's marathon went out hard.  Very hard.  14:49 through 5 km, 2:05:03 pace vs. the course and Australian all-comers' record 2:09:14 set last year by Silah Limo (Kenya).  Coming in at less than peak fitness, 2013 winner Yuki Kawauchi (Saitama Pref. Gov't) was the only non-African to try to roll with the pace, but in short order even he was left tumbling in the turbulence, caught at 10 km by the unheralded Shigeki Tsuji (Team Otsuka Seiyaku) coached by Japan's first 2:06 marathoner Takayuki Inubushi.

Up to 30 km there were few major breaks, the pack simply wearing down as the pace and rising temperatures took their toll.  40+ world record holder Kenneth Mungara (Kenya) repeatedly fell off the pack but clawed his way back.  One pacer stepped off at 30 km, prompting Limo to attack, but with 10 km to go it was still a pack of five including pacer Isaias Beyn, a mid-2:11 marathoner who it soon became clear was staying in to win.  Limo continued to push the tempo until it looked like a head-to-head race between him and 2:07 man Evans Ruto (Kenya), but again in the last 3 km Mungara ground back, this time going out front and getting away.

With a kilometer to go he was confident enough to give a #1 sign to the crowd, sailing on unchallenged to win in 2:08:42, breaking the course record, the Australian all-comers' record and his own 40+ world record.  Limo and Ruto joined him under 2:09, a historic day in Australian marathoning, with Tewelde Hidru (Eritrea) claiming a solid 2:09:33 PB for 4th.  Beyn held on to 5th, staggering, falling to his knees, getting up and continuing on as he came into the home straight with a PB and prize money in sight.

In what can charitably be described only as a major f*ck up, two well-meaning race volunteers ran down the straight and, unthinkably, grabbed Beyn's arms and pulled him forward over the last 100 m.  This of course resulted in Beyn being disqualified, through the interference of race staff and no fault of his own, a DQ from a potential PB for 5th holding major repercussions for his career as a developing athlete.  One can only hope that the Gold Coast Airport Marathon pays out the 5th-place prize money due to him for a performance in which he clearly gave everything he had. 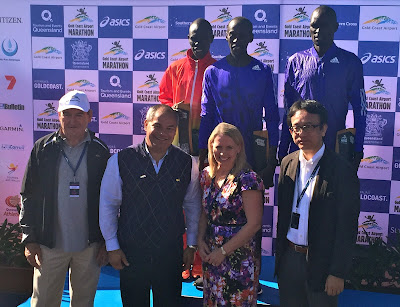 Tsuji held on to the top Japanese spot, finishing 7th in 2:15:19.  London Olympics marathoner Ryo Yamamoto (SGH Group) overtook Kawauchi mid-race, Kawauchi falling as low as 17th before rallying to catch Yamamoto by seconds for 8th in 2:16:23.  In overtaking Yamamoto Kawauchi has now beaten all three members of Japan's 2012 London Olympics marathon squad in head-to-head competition over the marathon distance since failing to make the London team.  "Well, there is that, I guess," he said post-race, "but I certainly wouldn't have hoped to do it in this kind of time."

In the women's marathon, where Japanese women have taken four of the last five years including a 2:27:17 course record from Yukiko Akaba (Team Hokuren) in 2013, it was a total blowout as Japanese women swept the top five places.  Favorite Risa Takenaka (Team Shiseido), running her second marathon after debuting in 2:28:09 in Nagoya in March, went out skimming just under CR pace, through halfway in 1:13:26 with only a male pacer as company.  After the pacer's departure at 30 km she began to grow heavy, the record and a PB slipping away but her win guaranteed as she extended the Japanese women's golden streak in 2:28:25 for 1st.  "I'm happy to win," she said post-race, "but I came here looking to run a fast time so winning was only achieving my minimum goal.  In the winter I'll need to run a much better time to make the Rio Olympic team." 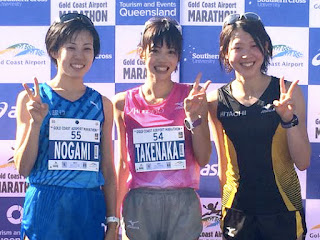 To the extent that there was turnover behind her, it was all between her compatriots as Ethiopian competition Makda Haji Harun and Tsehay Desalegn Adhana were nowhere to be seen.  Keiko Nogami (Team Juhachi Ginko), just behind Takenaka in Nagoya, told JRN pre-race that she hoped to run around 2:35 but surprised even herself by running 2:29:34 for 2nd.  "My training didn't go that well, so I didn't expect to run this fast at all," she said happily post-race.  Manami Kamitanida (Team Hitachi) rounded out the podium in 3rd in 2:33:43, with two more Japanese women, Shoko Shimizu (Team Aichi Denki) and Fumiko Hashimoto (Team Shimamura) taking 4th and 5th.  Australia's Victoria Beck was the top non-Japanese women at 6th in 2:45:58.

A day earlier in the associated Southern Cross 10 km, Olympian Martin Dent (Australia) turned in a 29:26 to take the men's race by 2 seconds over Malcolm Hicks (New Zealand).  Victoria Mitchell (Australia) ran an outstanding 32:59 PB to win the women's race.

Michael Maloney said…
We also have our own team from the self storage who would join marathons. Actually, it was only the half marathon. Two guys from portable pods section did the full marathon, while the other two would do 10kms run. Whenever there is an event, we would encourage them to do it since it promotes team work outside of work. As a company, we would foot half of the registration fee for them, which would inspire them even more.