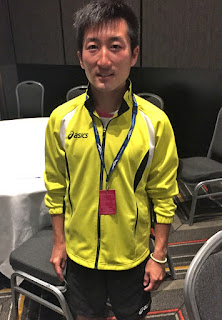 Nakazato, a promising new talent after a 2:24:29 at age 23 in 2011 in her second marathon, abruptly quit the Daihatsu corporate team in February last year.  In November she was diagnosed with cervical cancer, scuttling plans for her indy debut at January's Osaka International Women's Marathon.  The ASICS Half Marathon will be her first serious race since her 1:16:34 at last October's Sapporo Half Marathon and subsequent diagnosis, and despite her 1:10:03 best the question of whether she is fit enough to handle whatever competition she faces remains a good one.  And the competition is tough, led by 2015 Marugame Half winner Eloise Wellings (Australia) and sub-71 woman Sara Hall (U.S.A.).

No top-level Japanese athletes are on the list in the Southern Cross University 10 km, where with a legendary 2011 International Chiba Ekiden run in Vibram Five Fingers behind him Australia's Harry Summers comes in the top seed, but the same cannot be said for the main event, Sunday's Gold Coast Airport Marathon. 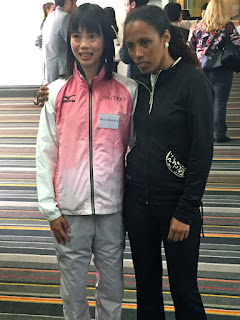 Japanese women have won 4 of the last 5 years including a 2:27:17 course record from the now-retired Yukiko Akaba in 2013, and with Risa Takenaka (Team Shiseido) and Keiko Nogami (Team Juhachi Ginko) coming in ranked #2 and #3 the chances of another Japanese winner look decent.  Takenaka, a former star collegiate ekiden runner at Ritsumeikan University, made a 2:28:09 debut for 5th in March's Nagoya Women's Marathon with Nogami just behind her.  The pair should be a good match for #1-ranked Makda Haji Harun (Ethiopia) for the win.  Either way it will be an Ethiopia-Japan battle up front, the top 7 entrants all hailing from those two countries. 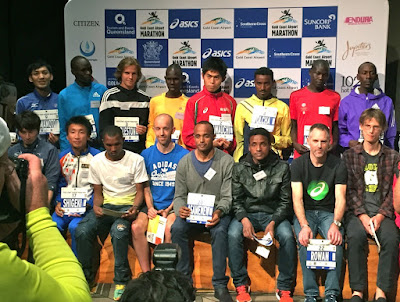 In the men's race, defending champion and course and Australian all-comers' record holder Silah Limo (Kenya) returns along with runner-up Jeffrey Eggleston (U.S.A.) and 3rd-placer Yuki Kawauchi (Saitama Pref. Gov't), but all three face some pretty tough competition from 2:04:48 man Berhanu Shiferaw (Ethiopia), sub-2:08 Kenyans Albert Matebor, Kenneth Mungara and Evans Ruto and more.  Weather permitting, and with the weather looking pretty good, a shot at Limo's 2:09:14 record seems on the cards.  The top non-African entrants, Japan's Ryo Yamamoto (Team SGH Group) and Kawauchi, will have a tough time of it trying to contend against the superior East African field.

Yamamoto, a member of Japan's 2012 London Olympics marathon team, had a superb 2:12:10 debut for 2nd in extreme heat at the 2009 Hokkaido Marathon, going on to run 2:08:44 to make the London team.  Since then his times have declined gradually, with a 2:09:06 in 2013, a 2:10:59 in 2014, and a 2:12:46 in Tokyo this February.  His most recent race was just a 30:19.51 track 10000 m in late May, not encouraging for the return-to-form marathon you would hope for on the Gold Coast.  "I had some trouble in April," he told JRN, "but things have been good since then.  I didn't run the kind of time I wanted to in Tokyo, so with the Olympics next year and the selection races before that I wanted to get in a good time.  Japanese runners have been running well here recently, so I'm hoping that time will come here on the Gold Coast." 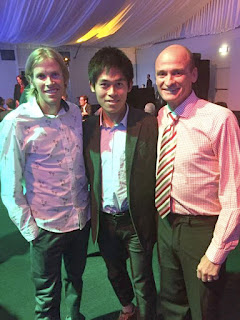 Kawauchi, a past Gold Coast winner, comes in with a long-lasting overuse injury stemming from a twisted ankle in late December.  Rather than taking the time needed to let the injury heal Kawauchi has continued to race almost without interruption to his schedule, the sole highlights of his season being a 2:12:13 for 2nd at April's Zurich Marathon and a 2:48:23 win at the Okinoshima 50 km two weeks ago.  A 2:12 at Gold Coast would be a very good day for him, anything faster a miracle.  "I'll go out with the lead pack and hang on as long as I can, whether that's 20 km or later," he said.  "After that I think I can run down people who fall off the lead pack, so I might end up with a result like last year.  That's all I can do."

JRN will be on-site throughout race weekend to cover the race live and provide expert commentary on Sunday's live webcast for the second year in a row.  Check back often for exclusive content.