With ekiden season in full swing it was the busiest weekend so far this fall as high schools across Japan competed in regional qualifiers for December's National High School Ekiden.  At the university level, the dynastic Ritsumeikan University women led start to finish to win their fourth-straight National University Women's Ekiden, bringing the school's total record to nine national titles.  With the last team to have beaten them, crosstown Kyoto rival Bukkyo University, having faded away following the departure of head coach Kenichi Morikawa for the Yamada Denki corporate women's team and Kanto Region rivals Tsukuba University likewise a ghost of their former selves with the decline of twin stars Haruka and Moe Kyuma, it fell to last year's runner-up Daito Bunka University to give Ritsumeikan a go for the title.

DBU's leading runner Rina Koeda was only a second behind Ritsumeikan's Natsuki Omori to get things off to a promising start, but on the 5.6 km Second Stage the combination of a new stage record of 17:29 from Ritsumeikan's Kotona Ota and a breakdown by DBU's Eri Tayama put DBU over a minute behind, a margin it spend the rest of the race trying to close.  Osaka Gakuin University got into the mix with a Fifth Stage record of 29:40 for 9.2 km by Saori Noda to get into 2nd, but DBU anchor Chikako Mori ran another stage record 17:06 for 5.2 km to retake 2nd and come within 21 seconds of Ritsumeikan's Ayaka Kikuchi.  Despite the big performance Mori couldn't carry the race entirely by herself as Ritsumeikan won in 2:04:36 to DBU's 2:04:57, Osaka Gakuin just 3 second back in 2:05:00 for 3rd.  Although Kanto is the dominant region in university men's distance running thanks to the legendary Hakone Ekiden, DBU was the only Kanto region women's program to make the top 8 and get seeded for 2015.

At the corporate level, West Japan's regional qualifier for December's National Corporate Women's Ekiden was also packed with new records.  Team Kyudenko led the entire way, Yuka Miyazaki leading off strongly just 2 seconds from the First Stage record and 2014 World Half Marathon bronze medalist Sally Chepyego taking 4 seconds off the record for the 3.5 km Second Stage in 10:26 to put Kyudenko into a relatively safe position against its toughest rival, Team Daihatsu led by Asian Games marathon silver medalist Ryoko Kizaki.  Daihatsu fought back with a Third Stage win by star rookie Sairi Maeda and a new record of 20:27 for the 6.495 km anchor stage by Kizaki, but Kyudenko was too far ahead and took the win in 2:17:08, a new record for the six-stage, 42.195 km course.  The entire field of twelve teams cleared the 2:23:00 qualifying time for Nationals, last-place Team Juhachi Ginko cutting it close in 2:22:29. 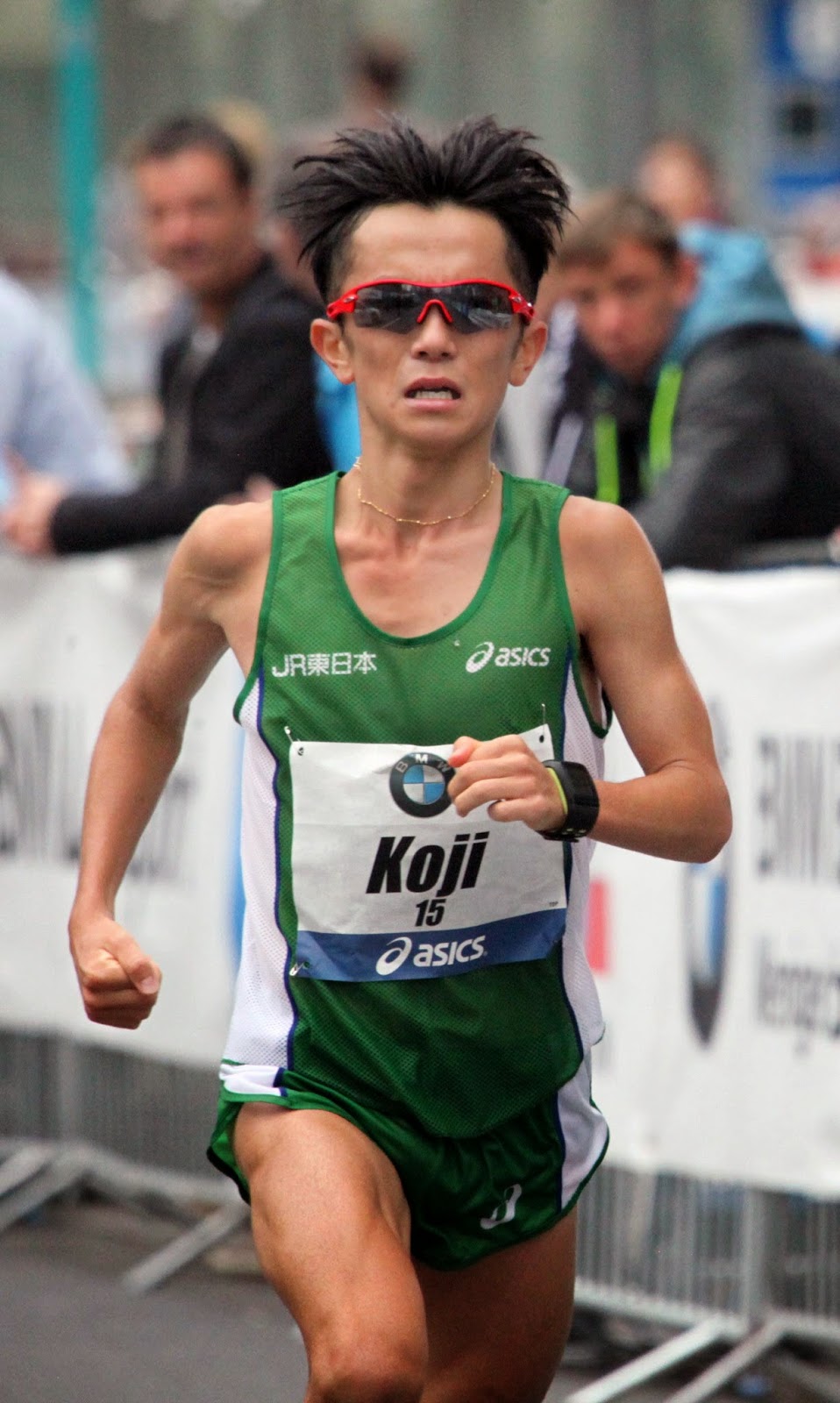 The fastest Japanese men's marathon of the weekend came at the Frankfurt Marathon where 2013 Hokkaido Marathon winner Koji Gokaya (Team JR Higashi Nihon) got under 2:12 for the first time, running 2:11:43 for 12th to beat favorite Vincent Kipruto by 26 seconds.  Gokaya previously showed aptitude for racing overseas with a 2:12:15 for 7th at the 2011 Chicago Marathon, and a promising performance in one of the deepest marathons so far this year is reason for optimism in a season that has seen mostly amateuristic international performances from Japan's best corporate men.