As XC season rolls on for their NCAA counterparts, Japan's collegiate men get moving Monday with the first of the Big Three University Ekidens, the Izumo Ekiden. A six-leg road relay with an average length of 7.52 km, Izumo features the top ten teams from Japan's biggest race, the Jan. 2-3 Hakone Ekiden, all based in the Tokyo-area Kanto Region, six schools from western Japan, four select teams from other parts of the country, and one select team of Ivy League graduates from the U.S.

The weekend after Izumo, Kanto Region universities that didn't make Hakone's top ten race in Tokyo's Showa Kinen Park at the Hakone Ekiden Yosenkai 20 km qualifier, where another ten will go on to Hakone glory.  The first weekend in November the best of Kanto and the rest of the country race from Nagoya to Ise at the eight-leg, 106.8 km National University Men's Ekiden Championships, the second of the Big Three.  Two weeks later most of the twenty schools running Hakone will send their full rosters to the Ageo City Half Marathon to pare down the contenders for their final lineup of ten men and six alternates for the biggest of the Big Three, the focus of the entire year, the ten-leg, 217.1 km Hakone Ekiden. 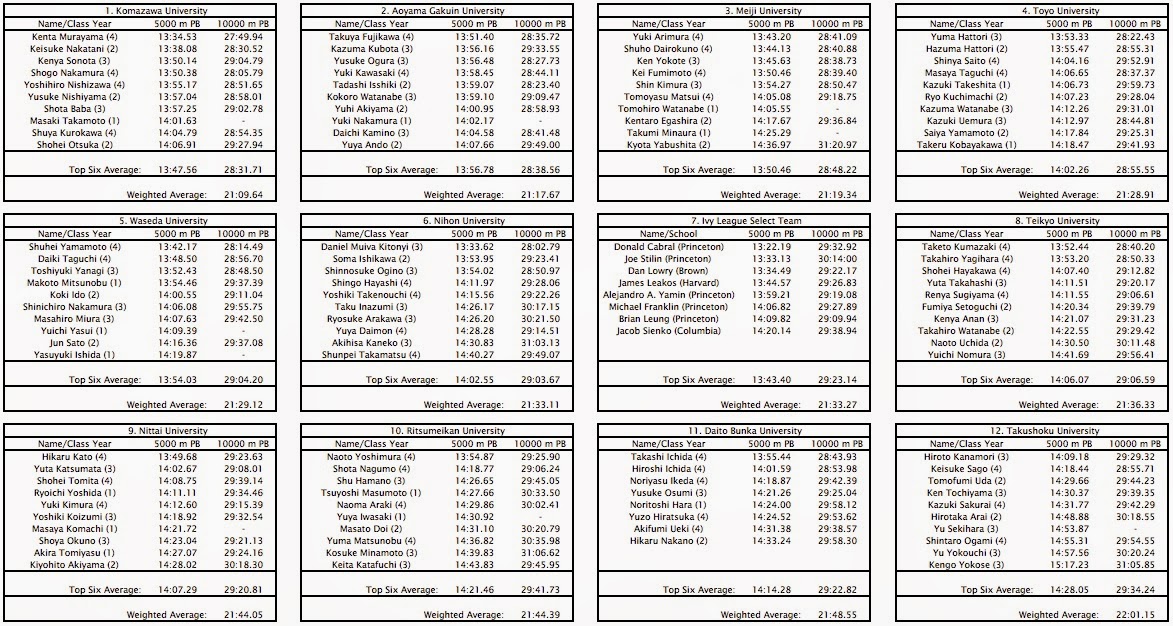 The top twelve teams at the 2014 Izumo Ekiden. Click to enlarge.

It's a steady progression from the 7.52 km average for the six stages at Izumo to the 13.35 km average for Nationals' eight stages to Hakone's ten-stage 21.71 km average, and compared to Hakone Izumo is short and fast.  Depending, of course, on when exactly the approaching typhoon #19 hits.  Last year's course record-setting winner Komazawa University returns as the heavy favorite.  Captain Shogo Nakamura broke 62 minutes at this year's World Half Marathon championships, sophomore Keisuke Nakatani has developed rapidly with new bests of 13:38.08 and 28:30.52, and since setting a new stage record at Izumo last year star senior Kenta Murayama has set new PBs of 13:34.53, 27:49.94 and 1:00:50.  Overall they are down very slightly from last year's course record-setting lineup but Komazawa remains the clear #1.

Their toughest competition is the previous course record holder, 2012 Izumo winner Aoyama Gakuin University.  Under head coach Susumu Hara AGU has developed steadily over the last five years from anonymity to one of the best, featuring tremendous depth and six-man averages of 13:56.78 and 28:38.56.  Despite missing its top senior Genki Yagisawa, Meiji University is the other main contender, close behind AGU on depth and average times but regularly underperforming in ekiden season.  If Meiji has it together they will be a threat to YGU and, if all goes perfectly, Komazawa.

2011 Izumo winner Toyo University and 2010 course record setter Waseda University are both down dramatically in strength this year, forming the top of a second tier with 2008-09 champion Nihon University, Teikyo University, and a strong Ivy League Select Team featuring Donald Cabral and Joe Stilin of Princeton and Dan Lowry of Brown.  The Ivies come in ranked 7th, and with a solid performance they could improve on their 8th place finishes in 2011 and 2012.

The third group of schools features 2013 Hakone Ekiden winner Nittai University, now in a rebuilding cycle after the graduation of most of its 2013 lineup, top non-Kanto Region school Ritsumeikan University, and the likable underdogs Daito Bunka University led by 2013 Ageo City Half Marathon winner Takashi Ichida and his twin brother Hiroshi.  Takushoku University rounds out the ten schools from Kanto and should be racing further back with the Kansai Region's Kwansei Gakuin University and other lower-tier competition.

The Izumo Ekiden is broadcast live nationwide on Fuji TV starting at 1:00 p.m. Japan time on Monday, Oct. 13.  The broadcast is rarely streamed outside Japan, but follow @JRNLive for live coverage brought to you by Japan Running News.